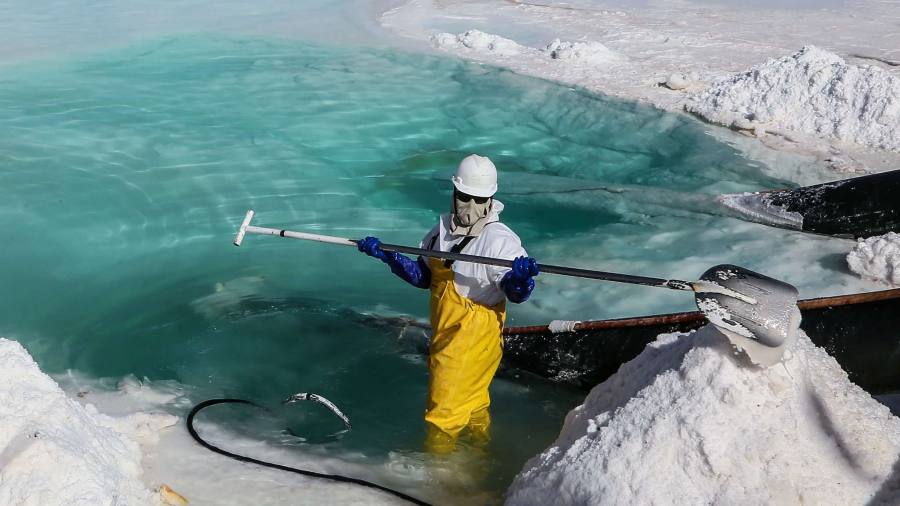 
The price of batteries for electric vehicles looks set to rise in 2022 following a decade of sharp decline as supplies of lithium and other raw materials fail to keep up with ballooning demand.

While mining companies scramble to increase production from existing facilities and develop new sources of supply, benchmark prices of lithium carbonate ended 2021 at record levels. In China, the biggest battery-producing country, the price was Rmb261,500 ($41,027) a tonne, more than five times higher than last January.

Other commodities used in cathodes, the most expensive part of a battery, have also been rising. The price of cobalt has doubled since last January to $70,208 a tonne, while nickel jumped 15 per cent to $20,045.

The increases are undermining the technological and efficiency gains of recent years, during which automakers and battery makers have worked hard together to develop long-life, high-performance batteries while trying to reduce costs. They also threaten to throw a wrench in the car industry’s ambitious plans for electrification just as even formerly reluctant companies such as Toyota embrace targets for electric vehicle production.

According to Bloomberg NEF, global electric car sales are estimated to have reached 5.6m vehicles in 2021 from 3.1m in 2020, thanks to brisk sales in China. Further demand growth in 2022 will mean a lithium deficit this year as use of the material outstrips production and depletes stockpiles, according to a December report from S&P Global.

Gavin Montgomery, research director for battery raw materials at Wood Mackenzie, said lithium prices were unlikely to crash, as they did in previous cycles. “We’re entering a sort of new era in terms of lithium pricing over the next few years because the growth will be so strong,” he added.

In the short term, supplies will be limited. Producers in Australia closed down mines in 2020 after a period of low prices and, as Covid-19 lingers, it has proved difficult to rehire staffers and bring production back to pre-pandemic levels.

Meanwhile, Chinese lithium-processing companies that make lithium carbonate were affected by restrictions on power use introduced suddenly in the autumn. Though some of those restrictions have eased, companies appear to be struggling to catch up.

For cobalt, pandemic-induced transportation disruptions and border closures in Africa have been behind the soaring prices. The emergence of the Omicron variant of coronavirus has added new disruptions in the main trade route from cobalt-producing Congo through the South African port of Durban to China.

One lithium trader in Japan told Nikkei Asia they expected prices to remain at current high levels, saying, “Based on automakers’ electric car targets, we doubt there is sufficient supply of raw material.” New technologies such as all-solid-state batteries would need even greater amounts of lithium, the trader added.

The pressure is on to secure new supplies of raw materials as the global car industry pivots away from the combustion engine to electric cars. Volkswagen and BMW are aiming for half their vehicle sales to be electric by 2030. Ford Motor expects 40 per cent of its sales globally to be electrified by 2030. In a surprising move, Toyota in December said it would sell 3.5m electric vehicles in 2030, shedding an image that the company is cautious about the switch to electric vehicles.

Independent battery makers are racing to increase their sources of supply, including the likes of China’s CATL, the world’s biggest battery producer. China accounts for more than 65 per cent of global battery production and more than half of lithium chemical production, a dominance that worries many in the car industry at a time of geopolitical tensions.

“No country can compare to China in terms of cost competitiveness,” said the Japanese lithium trader. “There are certainly geopolitical or China risks in the supply chain.”

This article is from Nikkei Asia, a global publication with a uniquely Asian perspective on politics, the economy, business and international affairs. Our own correspondents and outside commentators from around the world share their views on Asia, while our Asia300 section provides in-depth coverage of 300 of the biggest and fastest-growing listed companies from 11 economies outside Japan.

Tesla in 2020 secured its own rights to extract lithium from clay deposits in Nevada, US, an early example of an automaker working to cut out the middleman. In the same year, BMW signed a five-year cobalt supply agreement with Moroccan producer Managem in a deal worth $113m.

Volkswagen signed a deal last month to source the Vulcan Group’s “zero carbon” lithium to supply its battery cell factories. The German carmaker announced in the same month that it would establish a joint venture with Belgian materials company Umicore to build up production capacity for precursor and cathode materials in Europe.

Toyota said it had secured enough supplies of battery raw materials, including lithium, to meet its needs until 2030 through co-operation with the trading house Toyota Tsusho, in which Toyota has a stake of about 20 per cent.

Sanshiro Fukao, a senior fellow at the Itochu Research Institute, said carmakers saw raw materials as bargaining chips in negotiations with battery makers, and failing to secure commodities would leave them no choice but to buy expensive batteries from them. In the global race to produce lower-cost electric vehicles, that could be fatal.

Sourcing battery raw materials could soon prove as problematic for many carmakers as sourcing semiconductors had in the past year, Fukao said, and it was possible that carmakers might not be able to produce electric vehicles in the numbers planned due to shortages of materials.

“Whether they can secure raw materials today determines if they can prevail 10 years from now,” he said.

A version of this article was first published by Nikkei Asia on January 3 2022. ©2022 Nikkei Inc. All rights reserved

A European Debt Crisis Is Bullish For Bitcoin –…