Speculative Mania: Was 2021 The Peak?


“Speculative” is a word that aptly sums up the year 2021. The question that remains, however, is whether we have seen the peak in that speculative behavior, or will 2022 continue the trend?

From the mainstream media’s view, expectations are high that 2022 will be a continuation of 2021. Maybe such will be the case. However, , many of the headwinds that supported the ramp in speculative behaviors have, or will, reverse in the months ahead. To wit:

I am sure I have forgotten a couple of things.

As is always the case, the event that changes the is always unknown. However, the eventual market reversion is almost always a function of changes in liquidity or a contraction in earnings.

Heading into 2022, a review of 2021 can undoubtedly provide some clues as to what potentially happens next. Notably, “record levels” of anything are records for a reason as it denotes the last period before the eventual reversion.

While not a direct measure of speculative activity, share buybacks hit a record last year as companies rushed to improve bottom-line EPS reports. As , more than 40% of the index’s total return since 2011 came from share buybacks. Over the last few years, in particular, they have accounted for nearly 100% of the net buying in the market. 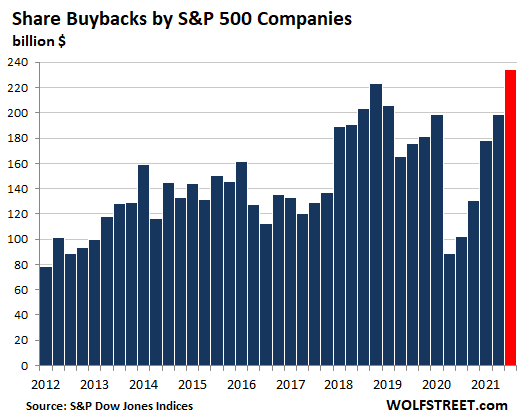 “If buybacks accounted for a large portion of the net purchases in the equity market, what happens if those buybacks reverse?”

While it may seem like an unlikely event now, there are many reasons companies could rethink using cash for uneconomic benefits. For example, higher interest rates, slower economic growth, or declining share values could cause companies to hoard cash rather than spend it.

There is also the risk of legislative action due to the problem of “wealth inequality” “n America. Over the last couple of years, CECEO’save gotten pushed into the spotlight for their excess wealth. While Congress may not lift taxes on the wealthy, an easy fix is making share buybacks illegal once again. Via Vox:

“Buybacks were illegal throughout most of the 20th century because they were considered a form of stock market manipulation. But in 1982, the Securities and Exchange Commission passed rule 10b-18, which created a legal process for buybacks and opened the floodgates for companies to start repurchasing their stock en masse.”

Everyone Is In The Pool

Another sign of excess speculation has been a record flood of liquidity into global equity funds over the last 18-months. Since the 2020 pandemic-driven economic shutdown, roughly $1.3 trillion in capital flowed into equity funds globally. 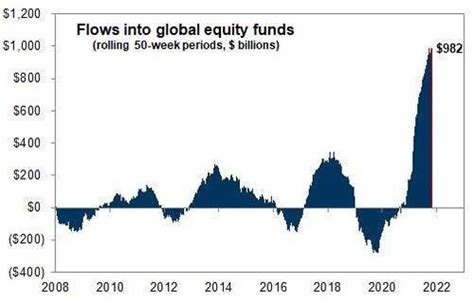 The massive floods of Central Bank liquidity and fiscal policy interventions by global governments swamped the financial system. So naturally, those funds found their way into equity funds to chase surging asset prices.

As we head into 2022, as noted above, the global government and central bank liquidity spigots are getting turned down. Interest rates are rising, and inflation is starting to affect policy decision-making. The result may well be a reversal of those flows into equity funds as witnessed in 2015-2016 and 2018-2019 as the Fed tightened monetary policy and tapered their balance sheet.

However, for now, everyone is still in the pool. When it comes to a speculative market, you don’t want to be the last one out.

The actual image of speculation came in the form of Wall Street rushing to dump their private equity investments onto the unsuspecting public. It is always worth remembering that Wall Street is a huge business. Their job is to fill investor demand with supply.

In 2021, demand for products was exceedingly strong, from ESG funds to electric vehicles, disruptive technologies, and cryptocurrencies. So if Wall Street could not get the company to market using a traditional IPO (initial public offering) process, a SPAC (Special Purpose Acquisition Company) was a quick way to get it done. 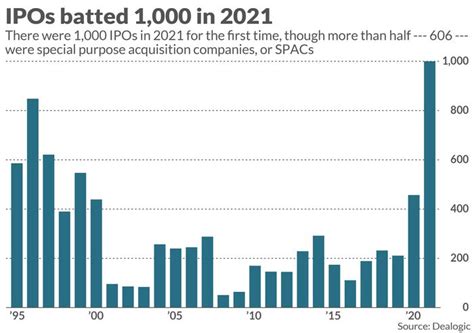 As shown below, investors were eager to buy the IPOs of companies even though most of them generated no profits. But in a “speculative market,” such is not surprising. 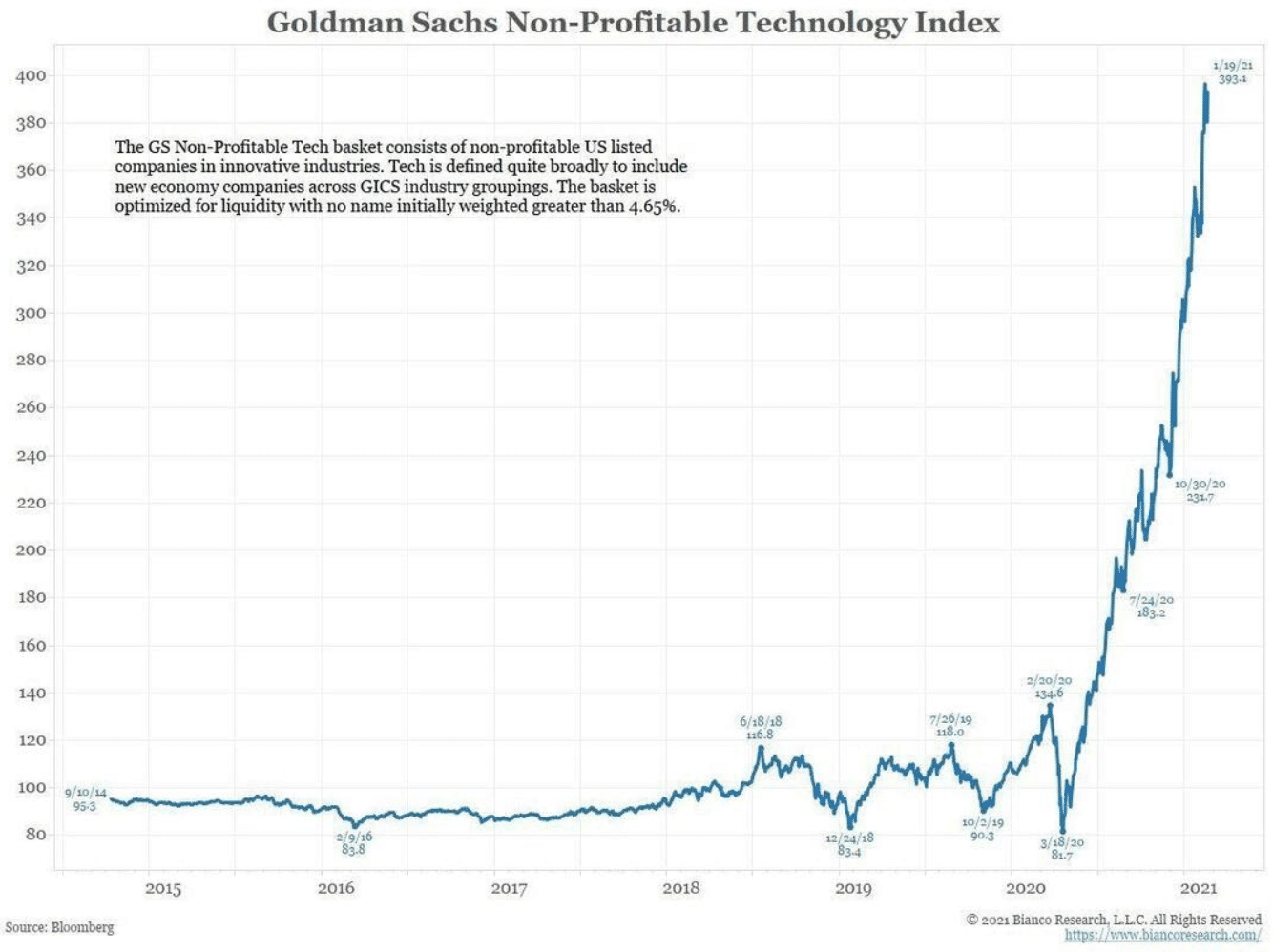 There was also a record number of private companies to reach $1 billion in market capitalization. In total, with private equity funds flush with capital, there were more than 800 “unicorns” in 2021 alone. 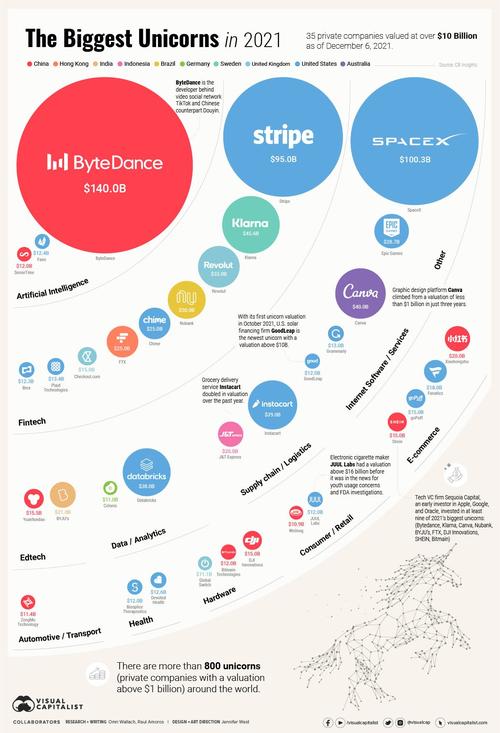 If unicorns are supposed to be a rare and magical sighting, 2021 was truly unique in that it generated 30 companies that reached $10 billion in market capitalization.

In the end, only Wall Street will benefit from the rush to supply speculative products to retail investors armed with a stimulus check and a trading app. But, as shown, by the end of 2021, most IPOs and SPACs failed to work as well as hoped. 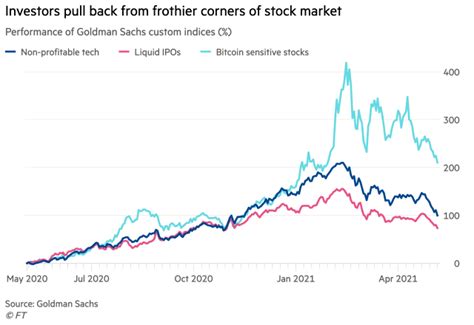 Seth Klarman’s famous book, “A”Margin Of Safety,” discussed the 1980’s bond mania before it imploded. At that time, many companies issued bonds even though there was little ability to pay the interest expenses. Today, we call such companies “zombies.” Such is because they must feed on cheap debt to stay alive. Currently, the market capitalization of these zombie firms is at a record.

Total EV of Firms with EBIT Less than Interest Expense

The obvious problem is what happens when they cannot refinance their debt. Unfortunately, as Kailash Concepts explains, debt itself is a significant risk.

“Currently, the world is awash in financial alchemy. There are a record number of companies unable to cover their interest expense from profits.

Since 2007, a big part of America’s debt crisis has moved from the financial sector to non-financial stocks with too much debt. We believe the mix of record debt and equity valuations is likely a side effect of real rates approaching lows last seen in 1973. Whether we are right or wrong on the causality, the facts are intimidating in our view.

Our research has documented the world has never been less prepared or equipped to deal with a possible outbreak of inflation or pull-back in Federal largesse.

However, it isn’t just a corporate leverage bubble. There is also a bubble in investor leverage. 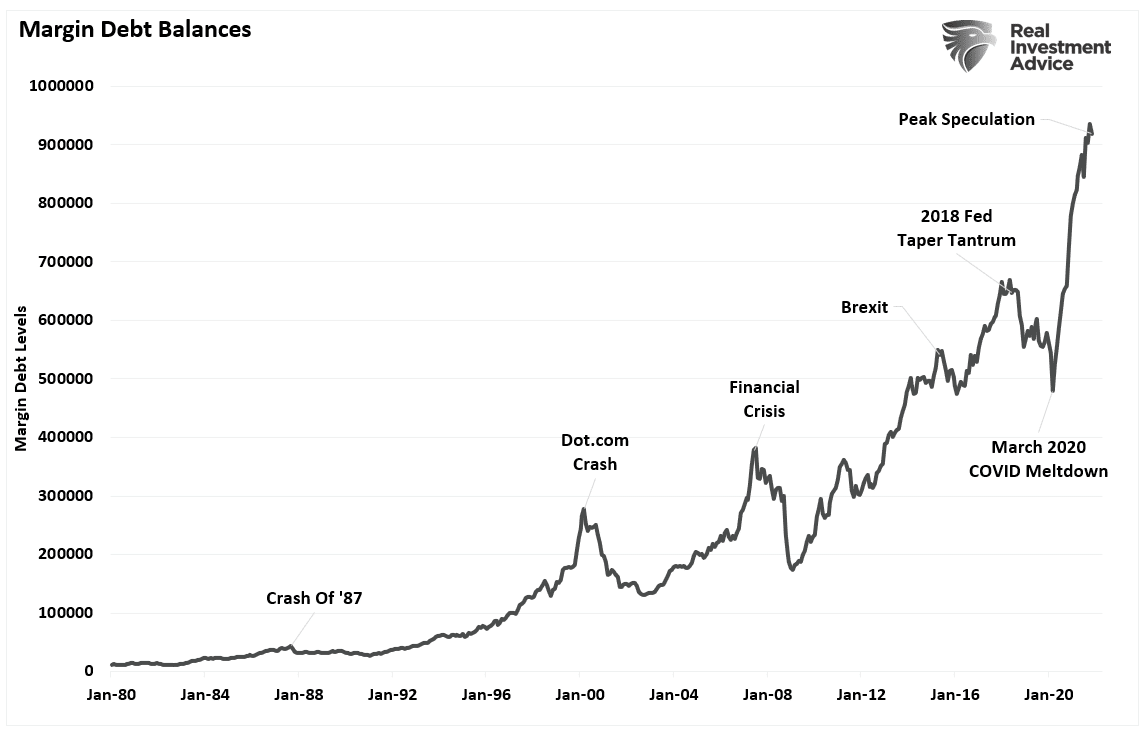 Not only did retail investors take on margin debt to leverage their bets in the markets, but they also took on a record level of speculative single stock options. Such is the purest form of speculation in the market. 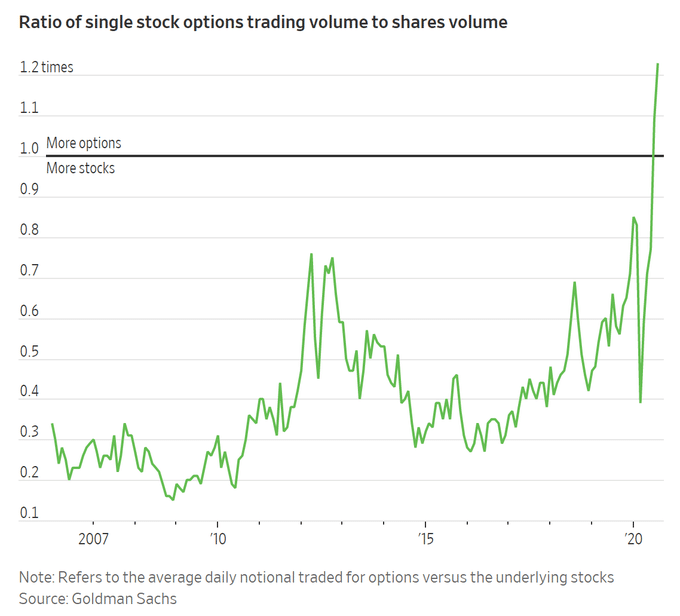 The problem with options and margin debt is that individuals have little control over the outcome. If asset prices fall, for any reason, investors speculating with leverage and options get wiped out from margin calls and contract expiration.

It is not a pretty thing.

The best measure of speculation in the market, in my opinion, is the number of people willing to pay more than 10x price-to-sales for an investment. But what about 20x? Kailash Capital recently showed an increase in the market capitalization of stocks with price-to-sales ratios greater than 20x.

“While we’ve seen an increase in the number of companies coming public via IPO’s / SPAC’s the number of investable companies hasn’t kept pace with the degree of inflows, resulting in re-ratings. Looking at the total market cap of stocks with P/S in excess of 20x we’ve surpassed the tech bubble high by nearly ~$1.0T.” – Kailash 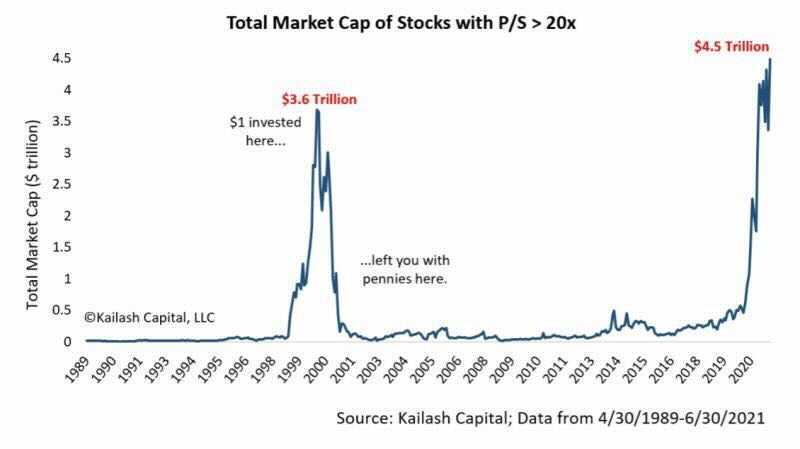 If you don’t understand why this is so essential, let me remind you what Scott McNealy, then CEO of Sun Microsystems, told investors paying 10x Price-to-Sales for his company in a 1999 Bloomberg interview.

“At 10-times revenues, to give you a 10-year payback, I must pay you 100% of revenues for 10-straight years in dividends. That assumes I can get that by my shareholders. It also assumes I have zero cost of goods sold, which is very hard for a computer company.

What were you thinking?”

Investors have forgotten the most crucial point of investing.

“The price you pay is the value you get.” – Warren Buffett

The amount of speculation in the market currently is rampant. There have only been a couple of times in history when we saw similar investors’ actions, and both ended poorly.

The three most significant market risks heading into 2022 are a reversal of the things that supported the speculative attitude of investors over the last year: buybacks, liquidity, and earnings growth. Notably, the reversal of liquidity impacts every facet of the economy and markets, and earnings are the “bullish support” for overvaluation.

As Ray Dalio once quipped:

As an investor, it is simply your job to step away from your “emotions” and look objectively at the market around you. Is it currently dominated by “greed” or “fear?” Your long-term returns will depend greatly not only on how you answer that question but to manage the inherent risk.

“The investor’s chief problem – and even his worst enemy – is likely to be himself.” – Benjamin Graham