– Yesterday is a hhigh 1 buy signal bar at the 50-day MA. The bulls hope that Wednesday is just a bear trap in a bull trend.

– However, yesterday was a doji bar, which is a weak buy signal, especially after a big bear day. Also, it barely touched the 50-day MA and many traders will not consider that an adequate test. Therefore, there probably will be more sellers than buyers above its high.

– This week is outside down on the weekly chart. The bears want the week to close near its low. At a minimum, they want it to close below last week’s low. That would increase the chance of lower prices next week.

– The bulls would like this week to close above last week’s low. That would increase the chance that last week will be more sideways than down.

– The Emini stalled at every big round number from the pandemic low except one (it quickly broke above 4,000). It is now stalling at 4800. Traders expect a move above, but they have not yet decided how long the pullback will last or how low it will go.

– January so far is a bear bar and a third reversal since October, but it is still early in the month. There is still plenty of time for the Emini to get back to the high.

– It is common for the Emini to pull back from a breakout above a strong bull bar on a higher time frame chart. However, it will usually break above it again before deciding whether to reverse down very far. If it then reverses a second time, the bears will have a better chance of a bigger correction.

– Wednesday was a big enough bear surprise bar for traders to expect at least a small second leg sideways to down. Many bulls will wait for at least a micro double bottom before buying again.

– However, there have been many reversals over the past two years and all have been minor.

– It continues to be more likely that Wednesday will fail to lead to a bear trend and that the Emini will make a new high before falling below the December low. However, one or two more big bear days would likely lead to a test of the December low.

– It is important to note that the entire rally from July looks like a bull leg in what will become a trading range. Trading ranges often begin before bull or bear trends end. There were many times when the bears had clusters of big bear bars closing near their lows since July.

– For the Emini to evolve into a trading range, it needs a bear leg. The bear leg will probably begin in the next couple of months.

– The Emini should fall to the December low and possibly the October low by summer.

– However, it will probably form a double bottom with one of those lows instead of continuing down.

– So, yes, it will probably break below the bull trend line from the Oct. 30, 2020, low to the Oct. 4, 2021, low. And it could be sideways for many months. But the bull trend is strong enough for traders to look for a resumption of the bull trend in the second half of the year.

– Over the next several days, traders will decide if the two-day selloff will be a 50% retracement of the late December rally or if the wedge top will lead to a test of the December low.

– It is currently more likely that this is a pullback from the late December rally than the start of a bear trend, but there will probably be another push down within a few days.

Emini 5-Minute Chart And What To Expect Today

– Emini is down 3 points in the overnight Globex session after the unemployment report.

– Yesterday was a trading range day after Wednesday’s sell climax. The sell climax was so extreme that traders might want to see more time going sideways before deciding if Wednesday was the start of a swing down on the daily chart or just a test of the 50-day MA. That increases the chance of another sideways day.

– Today is Friday, so weekly support and resistance can be important, especially in the final hour. This week is an outside down week and, therefore, the most important weekly magnet above is last week’s low. 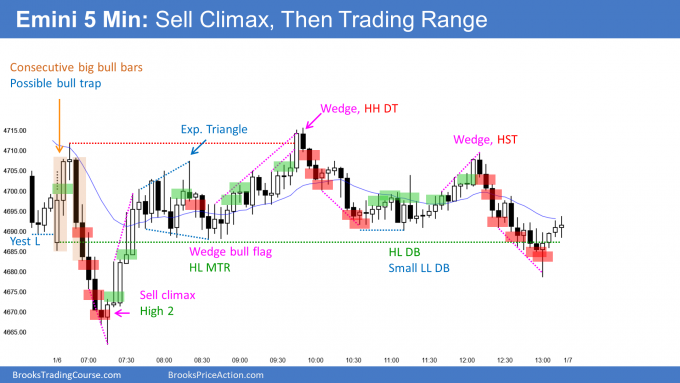 Here are several reasonable stop entry setups from yesterday. I show each buy entry with a green rectangle and each sell entry with a red rectangle. Buyers of both the Brooks Trading Course and Encyclopedia of Chart Patterns have access to a much more detailed explanation of the swing trades for each day (see Online Course/BTC Daily Setups).

My goal with these charts is to present an Always In perspective. If a trader was trying to be Always In or nearly Always In a position all day, and he was not currently in the market, these entries would be logical times for him to enter. These therefore are swing entries.

It is important to understand that most swing setups do not lead to swing trades. As soon as traders are disappointed, many exit. Those who exit prefer to get out with a small profit (scalp), but often have to exit with a small loss.

If the risk is too big for your account, you should wait for trades with less risk or trade an alternative market like the Micro Emini.

‘Spec-tech’ wreck a foretaste of things to come