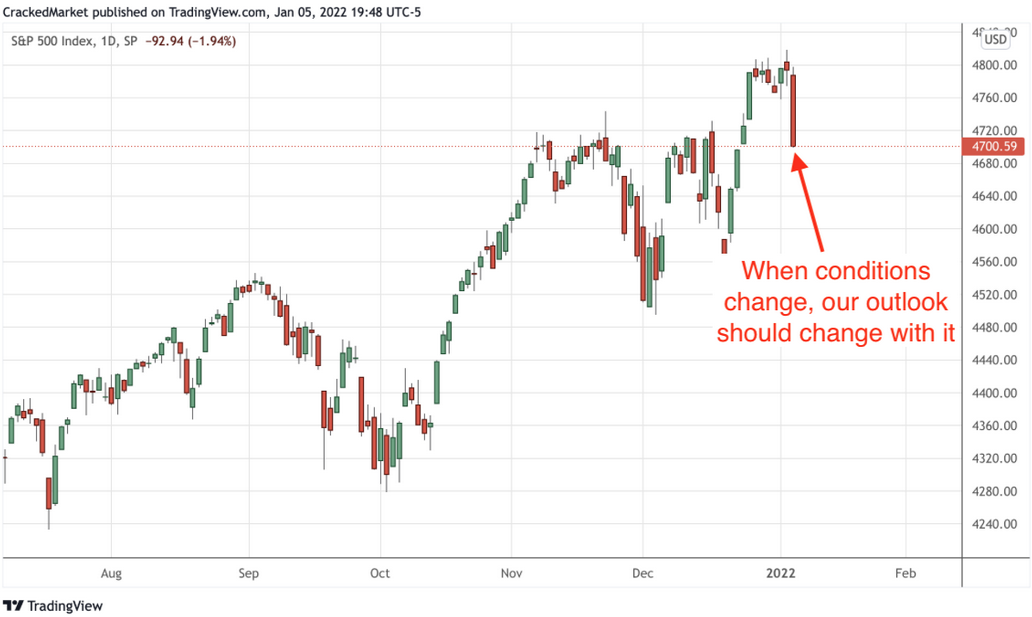 A modest midday slump in the devolved into a late blood-bath after the Fed’s suggested interest rate hikes could be coming a whole lot sooner than many investors expected. That’s all it took to rain on the bulls’ parade and send previously confident owners scrambling for the exits.

As I wrote yesterday, I was comfortable with the market’s recent price action. That even carried over into Wednesday morning’s modest slump. Everyone knows we cannot go up every single day and red days are a normal and healthy part of every move higher.

But that changed Wednesday afternoon when normal and healthy took a sharp turn into panic. While I was comfortable a few hours earlier, when conditions change, my outlook changes along with it. Only stubborn traders dig in and ignore the evidence in smacking them in the face. And luckily, I’m not one of them.

I came into Wednesday with sensible trailing stops spread across the lower to mid 4,700s to protect my profits “just in case,” but I was already pulling the plug on some of those positions long before those stops got hit. As easy as it is to buy back in, there is no reason to stick around when the tide so obviously starts turning against us. When the panic selling hits, I want to be one of the first to get out, not one of the last. And that means acting early and decisively.

Does Wednesday’s dip stand any better chance of succeeding than all of the other aborted selloffs the market shrugged off last year? Probably not. But as nimble traders, why do we need to pick sides? As easy as it is to jump out and get back in, why would anyone want to ride through a near-term dip if they didn’t have to?

Sell and see what happens from the safety of the sidelines is how I’m approaching this. If prices bounce today, Thursday, great, I’m getting back in. No harm, no foul. But if the selloff continues, even better, I wait for the next bounce and buy at even lower prices. That’s a win-win in my book.

Wednesday’s bloodletting extended to as cryptocurrency proves to be a follower and is nothing close to the alternative asset class proponents claimed it would be. If equities continue selling off Thursday and Friday, expect the carnage to take Bitcoin down with it.

But none of this should surprise readers. As I’ve been saying for a while, Bitcoin isn’t buyable until either it bounces off of $40k support or gets above $50k resistance. Until then, it is a no-touch.

Taiwan to support Lithuania with $200m fund after dispute with China