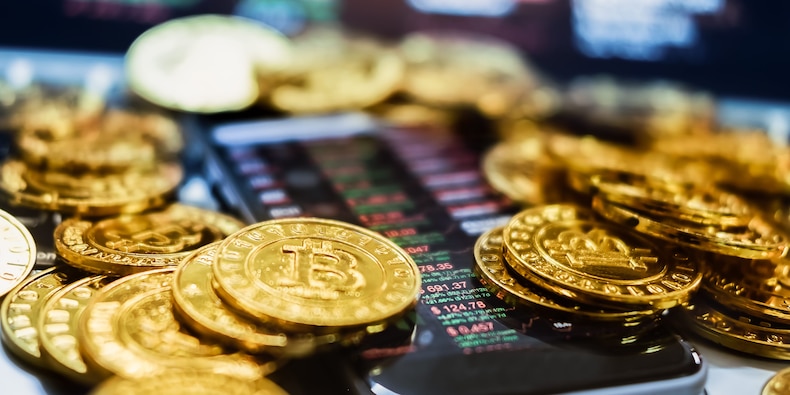 
Bitcoin fell roughly 9% Thursday and the broader cryptocurrency market was a sea of red, after minutes revealed the Federal Reserve could soon start rapidly cutting back its support for the economy.

Ethereum, the second-biggest token, had plunged more than 10% to $3,395. Solana had tumbled roughly 11%, and  Binance coin and XRP were both about 4% lower.

The crypto sell-off began Wednesday after the Fed released “hawkish” minutes from its December meeting, which showed the US central bank could tighten monetary policy faster than previously expected.

In December, the US central bank said it would speed up reductions in its bond purchases and signaled that interest rates would rise in 2022 as it grapples with the strongest inflation in 39 years.

Yet the minutes released Wednesday show policymakers could well go even further and faster than that, and the central bank could even start selling the bonds it bought during the coronavirus crisis.

“It may become warranted to increase the federal funds rate sooner or at a faster pace than participants had earlier anticipated,” they said.

Read more: 9 crypto experts told us their investing outlooks for 2022, from bitcoin price predictions to high-conviction altcoin picks and what’s next for regulation

The reaction in the markets was swift. Bond yields shot up and cryptocurrencies and technology stocks — two asset classes that have benefited the most from the Fed’s ultra-loose monetary policy — got trashed. The tech-heavy Nasdaq 100 index was up 0.66% Thursday as it recovered some ground.

Jeffrey Halley, senior market analyst at Oanda, said the “buy everything trade” is on its last legs. “Young pups … nurtured at the central bank pool of eternal [quantitative easing], will have to learn the meaning of the term ‘two-way price volatility,'” he said.

Marcus Sotiriou, analyst at digital asset broker GlobalBlock, said high levels of borrowing in crypto markets had worsened the sell-off. He said there was a “significant amount of leverage being wiped out of the market.”

Bitcoin Derives Its Value From Freedom

EU backlash over plans to label nuclear and gas as ‘green’