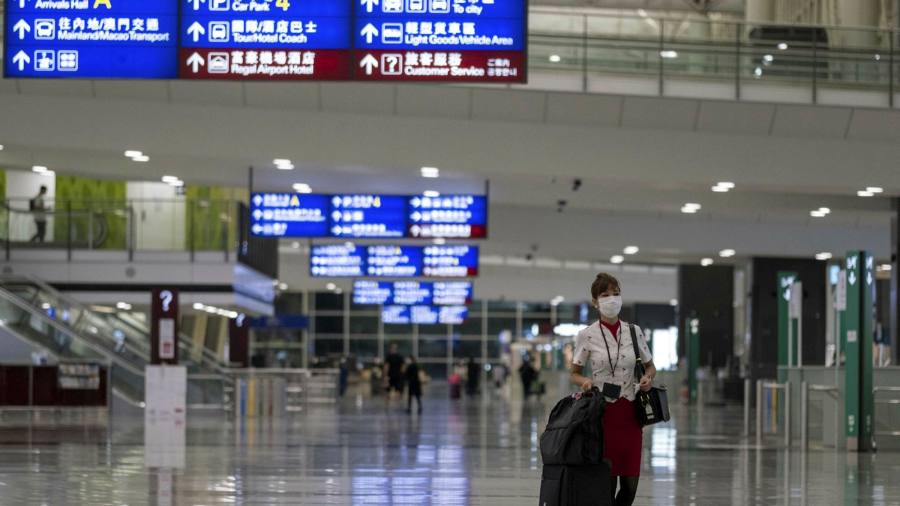 Hong Kong is to ban passenger flights from eight countries including the US, UK and Australia as part of a range of measures to tackle the spread of the Omicron variant of coronavirus.

Theme parks and gyms have been ordered to shut and evening dine-in at restaurants prohibited.

The Chinese territory, which has adopted a “zero-Covid” approach with some of the world’s strictest quarantine restrictions, has been seeking to keep the virus at bay following the emergence of the city’s first Omicron cluster.

Carrie Lam, Hong Kong’s chief executive, said on Wednesday that passenger flights from the US, UK, Australia, Canada, France, India, Pakistan and the Philippines will be banned for two weeks from Saturday.

1. Fed indicates faster rate rises are possible The Federal Reserve may need to raise interest rates “sooner or at a faster pace” than officials initially anticipated, as it seeks to tame uncomfortably high inflation and foster a stable economic recovery, according to minutes from its latest meeting.

2. Kazakhstan asks for Russian aid to control protests Kazakhstan’s president appealed to a Russian-led military alliance for help yesterday after vowing to act with force to curb protests that have swept the resource-rich central Asian nation owing to anger over rising fuel prices. A state of emergency was declared after buildings were set alight and demonstrators overran an airport.

3. Taiwan to support Lithuania after dispute with China Taiwan is setting up a $200m fund to invest in Lithuania and is aiming to take as many of the Baltic country’s goods banned by China as possible, as Taipei tries to reward Vilnius for its diplomatic support.

4. North Korea grows nuclear weapons, evading sanctions Pyongyang has exploited “non-financial” businesses and professions, including precious metals dealers and a casino to undermine international sanctions, a new report has revealed. Yesterday, it fired a suspected ballistic missile towards the Sea of Japan, according to the South Korean and Japanese governments.

5. Evergrande launches bid to delay payments The property developer will hold an online meeting with renminbi-denominated bondholders this week as the heavily indebted Chinese developer seeks to delay more repayment deadlines and battles to complete its real estate projects.

Sydney Festival begins The arts and cultural festival is set to kick off today. More than 20 acts have announced they will boycott the event over a sponsorship deal with the Israeli embassy. (The Guardian)

Anniversary of US Capitol riot President Joe Biden is expected to speak at the US Capitol to mark the anniversary of the deadly assault by a mob supporting then-president Donald Trump. A year on, many Capitol Police officers continue to suffer from the physical and emotional impact of the attack. (FT, NYT)

China’s business crackdown threatens growth and innovation The speed and ferocity of Beijing’s actions against private companies has caught both domestic and foreign observers by surprise. It is estimated that the crackdown has wiped out more than $1tn from the market value of Chinese companies.

Investors gear up for ‘gold rush’ in metaverse hardware The metaverse — a catch-all term for the theory that people will spend ever greater proportions of their lives in ever more immersive virtual worlds — may lack an exact definition. But the parameters are clear enough to forecast the types companies that stand to benefit.

The battle to implement a historic global tax deal Turning the political agreement into legally binding commitments may prove a long and hard slog. And ironically the US, a main instigator of the deal, could in effect kill it owing to the polarised politics that so often block domestic legislation.

Online streaming looks to Asia for steady flow of subscribers Emerging markets have billions of customers hungry for content, according to data from Omdia, a technology consultancy. There are, however, a variety of obstacles to turning that demand into rising revenues.

Hello, universe. Is there anyone out there? In the future, we may look back at our times and ask the question: was it really such a good idea to contact aliens? John Thornhill argues that astronomers should first consider whether they have the right to contact extraterrestrial life forms.

From the grand former War Office building in Whitehall to a Rwandan island retreat, here are the biggest hotel openings of 2022.

#TechAsia — Your guide to the billions being made and lost in the world of Asia Tech. Sign up here