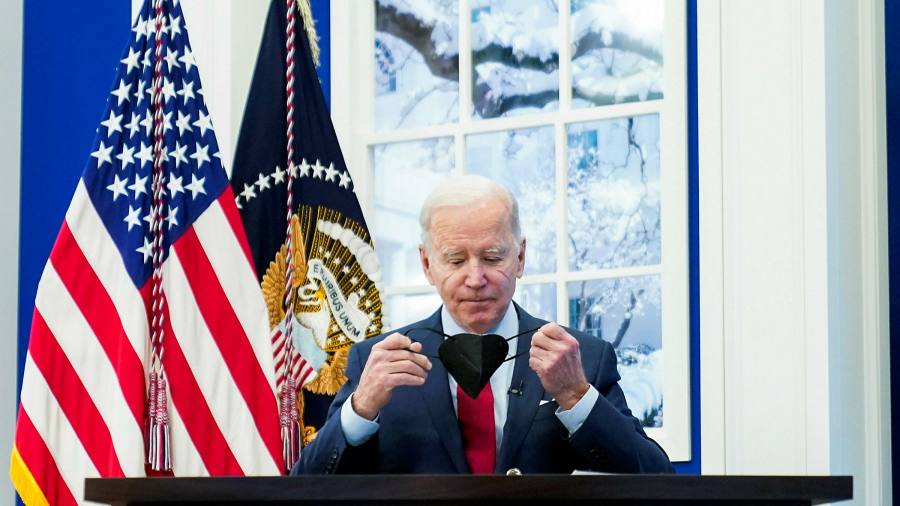 Joe Biden returned to Washington this week with a snowstorm paralysing the US capital, a fitting backdrop for a president who starts the new year battling multiple crises from a surge in coronavirus infections to a stalled economic agenda and rising tensions with Russia.

The Omicron variant, which has resulted in a record number of daily infections, put the Biden administration immediately on the defensive, especially over crippling testing shortages and confusion surrounding its decision to cut in half the amount of time that asymptomatic people must isolate, from 10 days to five.

On Tuesday, Biden was forced to warn yet again of tough times ahead. It was a humbling moment for a president who entered office almost a year ago with high hopes of crushing the virus, and who was elected in large part for his promise to manage the pandemic more competently than his predecessor.

“Biden’s most important task is to show why America went from electing the president with the fewest years of governing experience in history to the one with the most,” said Ben Koltun, an analyst at Beacon Policy Advisors, a Washington consultancy.

2. Evergrande to meet onshore bondholders in bid to delay payments The world’s most indebted developer with more than $300bn in liabilities, Evergrande is in the early stages of a large-scale and politically sensitive restructuring process.

3. Kazakhstan government resigns amid protests over rising fuel prices The protests are a rare event for the tightly controlled country. Kazakhstan, like Russia and other countries in the region, has been struggling with rising prices for basic commodities amid the economic strain of the pandemic.

4. TPG targets $9.3bn valuation in IPO The US buyout firm plans to raise as much as $877m in an initial public offering that could value it at more than $9bn, tapping into a wave of investor interest in private equity.

CES, the annual consumer electronics show, will be held in person in Las Vegas from January 5-7, closing a day early.

The Federal Reserve will release minutes from the Federal Open Market Committee meeting held in December 2021.

Legislators face battle to implement historic global tax deal Turning the political agreement into legally binding commitments may prove a long and hard slog. And ironically the US, a main instigator of the deal, could in effect kill it owing to the polarised politics that so often block domestic legislation.

Elizabeth Holmes’s conviction splits Silicon Valley After a jury found the Theranos founder guilty of conspiring to defraud her investors, industry watchers were divided on the significance of the verdict. The decision represented a landmark in Silicon Valley, where few start-up founders have faced public reckonings.

Hello, universe. Is there anyone out there? In the future, we may look back at our times and ask the question: was it really such a good idea to contact aliens? John Thornhill argues that astronomers should first consider whether they have the right to contact extraterrestrial life forms. Who should decide what message to send to aliens? Vote in our poll.

US military battles ‘Costco drones’ For all the hype about hypersonic missiles, cheap, small, low-tech enemy drones are fast becoming one of the most significant threats facing US forces since the Korean war in the 1950s, according to a top general for the Middle East.

Online streaming looks to Asia for steady flow of subscribers Emerging markets have billions of customers hungry for content, according to data from Omdia, a technology consultancy. There are, however, a variety of obstacles to turning that demand into rising revenues.

How to organise your wardrobe

From seasonal colour-coding to see-through bags: the experts’ tips on keeping clothes tidy and in top condition.