Most-Upgraded Chipotle Mexican Grill Is A Tasty Investment For 2022

The current consensus is for revenue to be flat on a sequential basis to maintain a steady 22% of YOY growth. We believe that this is underestimated because Chipotle is experiencing organic growth and expansion growth while raising prices. The company proved it has pricing power in the last .

BTIG analyst Peter Saleh had this to say when he reiterated a buy rating and $2,150 price target after the last earnings report:

“We believe the brand has ample pricing power not only to sustain margins but to grow them in the quarters and years ahead. We expect restaurant margins to expand several hundred basis points over the coming years as the brand raises menu prices, leverages digital and loyalty, and expands its footprint with higher-margin restaurants. While investors were likely disappointed by the 4Q21 margin outlook, coming in about 200-250 bps below consensus, we’re encouraged by sustained traffic gains in the face of double-digit menu pricing.”

Chipotle Mexican Grill embraced digital even before the pandemic began but has accelerated its efforts in the time since. This includes remodeling old stores and building new ones to include digitally-focused Chipotlane drive-thrus. This quarter’s latest concept that is expected to launch is the Chipotlance Digital Kitchen, a drive-thru concept without any seating or front-house operations. The Chipotle digital experience includes the metaverse, as well, with the company opening the first-ever restaurant brand on the Roblox (NYSE:) platform. Also on tap is the rollout of vegan chorizo nationwide, a move that should drive an incremental gain in revenue by itself.

The Technical Outlook: Chipotle Mexican Grill Is Moving Up From Support

Shares of Chipotle Mexican Grill pulled back from a high in the second half of 202s but has since put in a bottom. The stock bottomed in November and December of 2021 and looks like it is ready to move higher now. Price action has regained the upped side of the short-term moving average, where support is being tested now. Assuming the market follows through on its recent activity, we see shared of CMG moving up to the $1800 and $1900 levels in the very near to near term and then moving higher by the second half of 2022 on strong results. 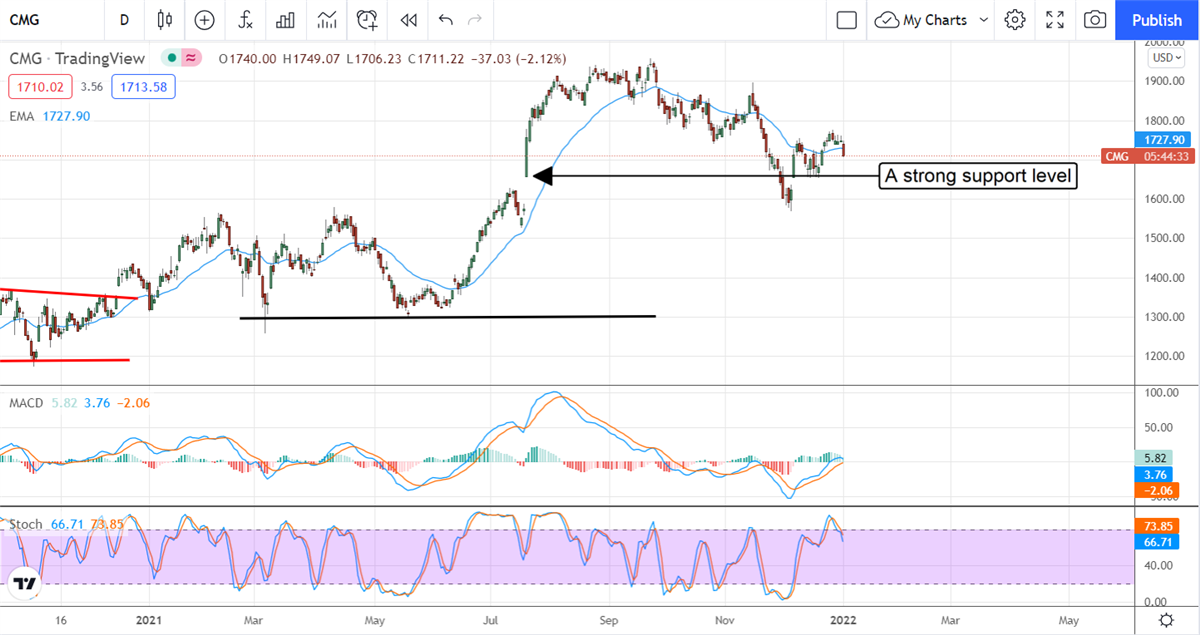 Fintech-focused Ribbit Capital raises $1.15B in seventh fund, according to SEC filing – TechCrunch