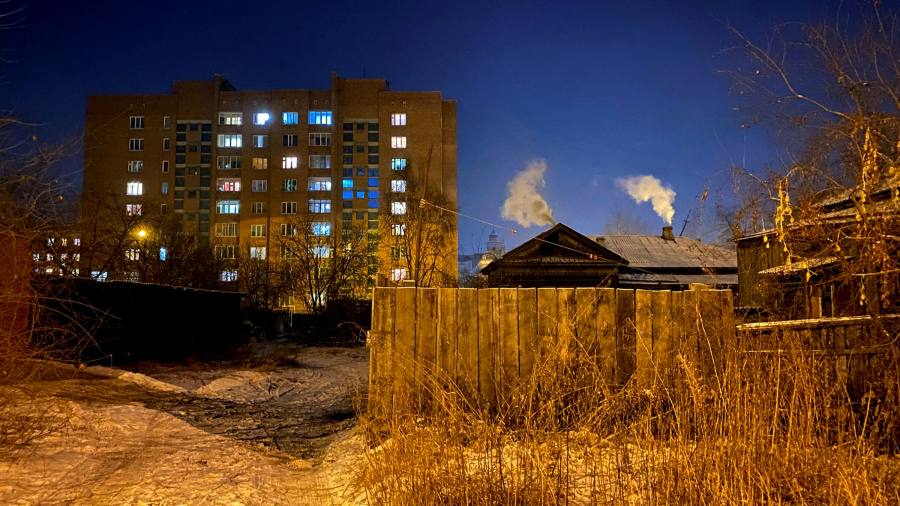 
Standing on a lookout point above the Siberian city of Chita, 46-year-old energy worker Vitaliy Gobrik surveyed its fast-expanding suburbs, where the landscape bristles with thousands of low-rise chimneys.

“Out of poverty, people burn coal, wood . . . but they also burn rubber, garbage, waste oil, wooden rail sleepers,” Gobrik said, smog sinking into the skyline below. “They put anything they can find in those stoves.”

Chita is one of many big cities in Siberia that have not been connected to Russia’s domestic gas network. Instead, coal-fired power stations heat the city centre, while residents of the suburbs fend off freezing temperatures by firing up furnaces, causing some of the worst air pollution in Russia.

Though Russia is the world’s biggest gas exporter, flexing its muscles as an energy superpower on the global stage, back home it has struggled to connect its vast landmass to the domestic network. Whole time zones have been left behind.

Only 11 of Russia’s 85 administrative regions are fully connected to the gas pipeline network; about a third of settlements are not connected. In the vast Siberian federal district, with 17m residents, just 17 per cent of settlements have access to piped gas.

State-run gas giant Gazprom, which has been responsible for expanding major domestic infrastructure since the 2000s, has said it plans to build all the domestic pipelines that are “technically feasible” by 2030.

Igor Yushkov, an analyst with the National Energy Security Fund think-tank, said it would be more apt to use the term “economically justified”. Many areas are too remote and sparsely populated for costly projects to make financial sense. “In most cases, Gazprom is justified when it makes this argument,” Yushkov said.

But many areas remain that should be connected, he added.

“Gas is not just a commodity, it’s an element of social justice,” Yushkov said. “We are the largest country in the world in terms of gas reserves . . . while many people are without gas even when living along major export pipelines. Frankly, people are annoyed.”

Chita, which lies about 5,000km or more than four days by train away from Moscow, bordering China and Mongolia, does not feature in Gazprom’s near-term proposals at all, according to the company’s pipeline expansion plans to 2025.

Konstantin Ilkovsky, the region’s governor until 2016, realised gas was a priority when he first moved to Chita and wondered why his clothes would be a sooty grey colour by the end of a working day. “Everybody got gas, while we were left behind like some outcasts,” he said. “I felt personally resentful.”

Ilkovsky lobbied Moscow for a gas pipeline and worked on expanding storage facilities for liquefied natural gas that could be delivered by tankers.

“When there’s no wind and temperatures are below freezing — meaning the power plants are burning coal at full blast — the city is covered in coal dust,” he said. “And that is what people are breathing.”

But in meetings with Gazprom and other authorities, Ilkovsky was told that his region’s population — at just over a million — was too low to make building a pipeline financially viable.

Ilkovsky disagrees. “There is no alternative to gas. We are a gas superpower. It’s just funny to even be arguing about whether or not we need to connect these regions to the network,” the former governor said.

Chita lies in a basin, at the confluence of two rivers, and the surrounding hills lock in polluted air. During the summer, smoke from nearby forest fires also gets trapped over the city, said Chita pensioner Elvira Cheremnykh.

Cheremnykh, 69, lives in a one-room wooden house that she heats with logs when she can afford to. With coal, “you end up all black like the devil,” she said, standing in the snow outside her home on a particularly toxic day, the air’s smell and taste a mix of sulphur, petrol and soot.

Her neighbours, however, burn whatever they can find, she said, and their chimney comes up right outside her window. “It’s impossible to breathe . . . it all ends up in here,” she said. “You need a gas mask, and even that won’t save you.”

In the 1990s, businesses affiliated with the Yukos oil company developed a plan to build a pipeline beside a stretch of the Trans-Siberian railway, bringing gas to the region’s cities, said Ravil Geniatulin, who was governor of Chita and the wider Zabaikalsky Krai region for 17 years.

“The project was genuinely about to get started,” Geniatulin recalled, from a room in the Chita city archives. “Maybe the documents still exist somewhere — maps, beautiful ones, where you can see the pipeline drawn on in blue.”

In the mid-2000s the plans fell apart, he said, along with Yukos itself — which was seized by the government. Its chief executive Mikhail Khodorkovsky was jailed.

The announcement of the building of Gazprom’s massive Power of Siberia pipeline, bringing gas for export to China from a field located just 500km away from Chita, raised hopes in the city once again. But a different route was chosen for the pipe.

Plans are being made for a second Power of Siberia pipeline to China via Mongolia. “Skipping us, though, once again,” noted Vladimir Kurbatov, a Chita security guard and Communist party member, who has picketed the local government over gas supplies and air pollution.

Kurbatov said many had given up on the idea of gas pipelines, himself included, but they were still desperate for cleaner air. He wants authorities to build the processing plants and storage infrastructure necessary for Chita to be powered on LNG, but is sceptical that a government-led clean air programme for the city will deliver on its objectives.

“I’ve seen how people in western Russia live,” Kurbatov said. “It’s all clean there, all using gas . . . Whereas here we breathe the entire Mendeleev [periodic] table of elements.”

Twitter Disgrace to Democracy for Ban on Marjorie Taylor Greene