After Stellar 2021, Markets Could Remain Strong In 2022, But Beware Rising Risks


After markets produced some of the biggest gains in the last 20 years during 2021, what can investors expect next?

History suggests that the momentum should continue in 2022, but investors could also face more stress in the coming year from an array of worries about the coronavirus, inflation and interest rates and politics, foreign and domestic.

As such, one hears Wall Street pundits talking a lot about the need for caution and realistic patience. Markets, they say, will have a good year, but they’ll be volatile. Maybe not as volatile as they were in early 2020 when panic over COVID-19 pressured the lower by 35% in about a month.

The fact is the US stock market has been on a durable roll since the 2008-2009 financial crisis. 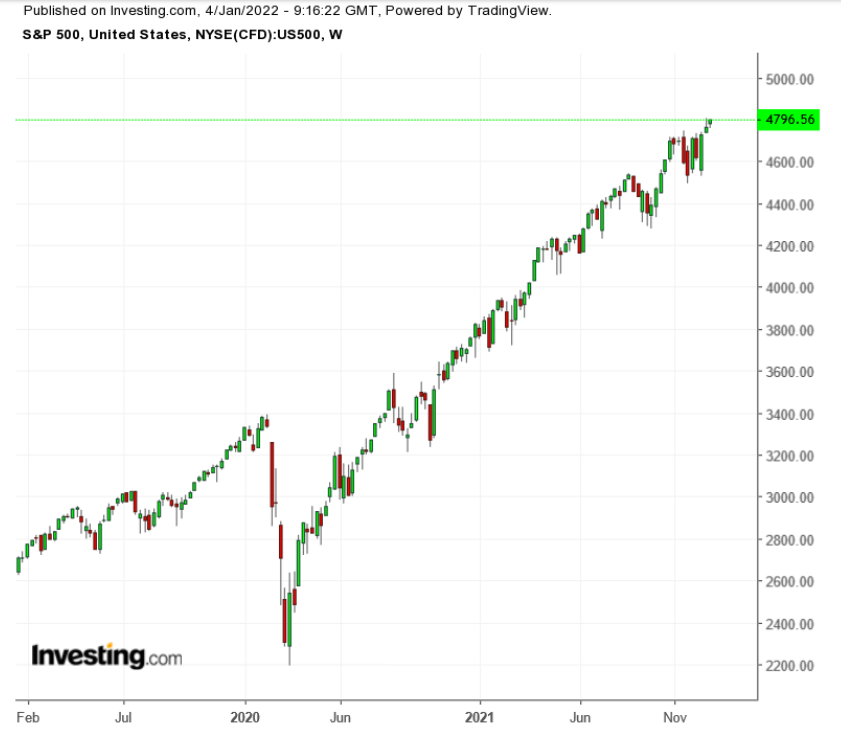 The S&P 500 has closed higher for the year 10 out of the past 13 years, and during the years it didn’t finish higher, it ended the year flat.

There are many reasons to think this streak can continue.

The domestic economy is growing. Consumer spending overall is strong. Employment is expanding, with the Labor Department expected to report on Friday that grew by 400,000 in December and the fell to 4.1% from 4.2%.

Corporate earnings, the real fuel for stock prices, are booming. Third-quarter earnings were up 27.1% from a year earlier, and it would take a major shock to derail the trend. 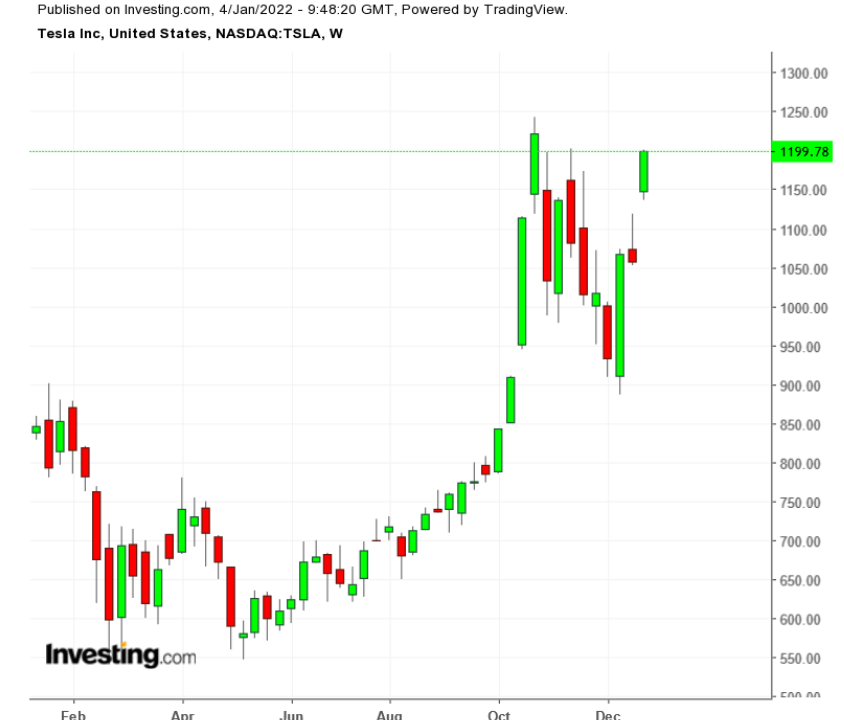 While the COVID-19 pandemic is proving stubborn, current research suggests the Omicron variant, which made its appearance around the Thanksgiving weekend in November, could be a milder form of the virus. Better still, Scott Gottlieb, former Food and Drug Administration Commissioner, told CNBC on Monday that Omicron may become less of a threat perhaps in weeks.

If the research is right and people continue to get vaccinated, he added, by the fall COVID may be far less of a threat. In the future, he suggested, Americans will get annual COVID shots, much like they do now for the flu.

But there are still many risks. These include:

The Federal Reserve thinks it’s time to start weaning the U.S. economy off the massive amounts of cash it has pumped into the economy since 2020 to prevent it from freezing up. Since then, however, inflation has emerged as a problem. Gasoline prices are up nearly 50%. Freight rates, food prices, prices for new and used cars have jumped. Workers have demanded higher wages and can back up their demands by quitting jobs.

The most immediate tool the Fed has to fight inflation is to raise interest rates, which would help solve a second issue. The Fed’s federal funds rate (the rate it wants banks to charge each other for overnight loans) is effectively zero and has been since COVID erupted. The Fed’s policy has helped fuel the stock market resurgence starting in the spring of 2000. It’s also fueled new and existing home sales and large investor purchases of homes and apartments to rent.

The central bank is expected to start raising rates possibly in the fall, two or three increases this year.

Bond yields moved higher Monday, in fact, in expectation of higher rates. The wildly followed hit 1.628%, the highest yield since peaking at 1.746% on March 31.

So, is a rate increase the end of the world? Not right away. But a rate-increase campaign must be managed carefully. The Fed started to raise rates in 2003 after cutting them sharply to help the economy weather the effects of the 9/11 terror attacks. It took three to four years before they began to weigh on markets and contributed to the 2008-2009 crash. 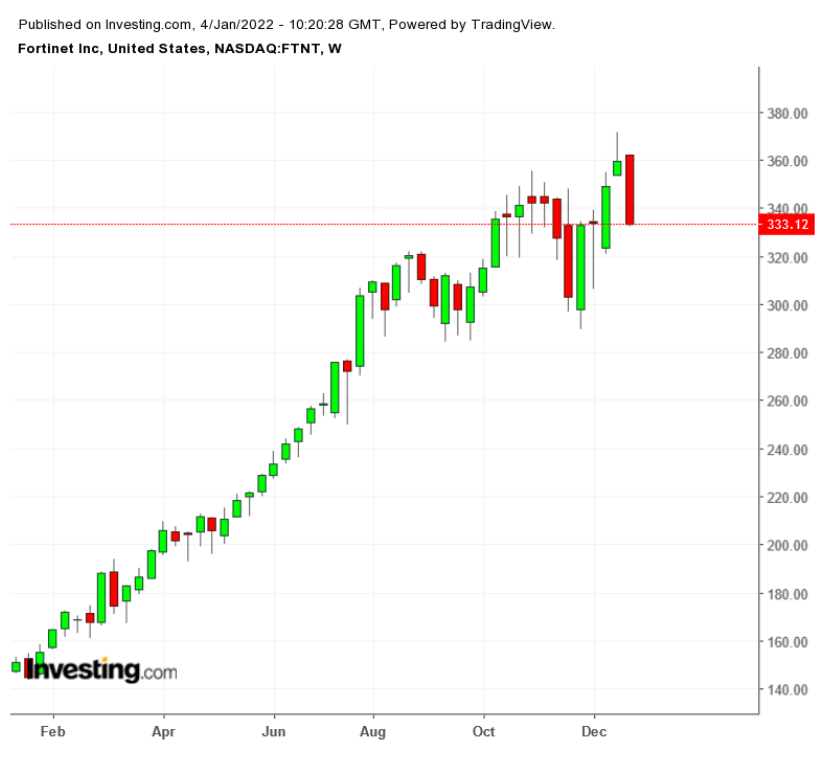 Both vaccine maker Moderna (NASDAQ:) and cybersecurity software and hardware provider Fortinet (NASDAQ:) were up more than 100% for 2021.

Apple gained 34% in 2021 alone and was up 2.5% on Monday. NVIDIA (NASDAQ:), whose chips power video games and the systems used to run cryptocurrency networks, added 125%.

At the same time, many smaller cap stocks failed to match the gaudy returns of their bigger brethren. Worse, the number of stocks making new highs lagged the number making new lows as the year wound down.

As such, the risk is this: If rates move too high (let’s say +5%), stocks will react badly. That’s what happened during the 1987 market blow-off; it was also a major contributor to the 2008-09 financial crisis.

These aren’t going away yet and they will weigh on stocks.

These appeared after the eruption of the COVID-19 pandemic in 2020, which disrupted the global trading system so much that no one could predict when a shipment of goods—from chips and electronic assemblies to cars and even the guides used in kitchen cabinet assembly—might actually be delivered.

Another inflationary driver: people quit their jobs in droves during the pandemic, forcing employers to raise wages in order to continue hiring.

An additional catalyst: OPEC and friends trimmed back global supplies. Result: Retail gasoline prices in the United States jumped 45% in 2021.

Remember last spring when there was brief global relief that pandemic numbers were decreasing and maybe one didn’t need to mask up? That stalled out thanks to the worldwide spread of both the Delta and Omicron coronavirus variants.

Omicron appeared in late November and spread so quickly that reopened theaters on Broadway had to shut down again almost immediately, restaurants saw business fall off abruptly, and cruise ships seemed unable to prevent the virus from infecting passengers and crews.

Shares of Red Robin Gourmet Burgers (NASDAQ:), a casual eatery chain, doubled in the first quarter on hopes the worst was over. 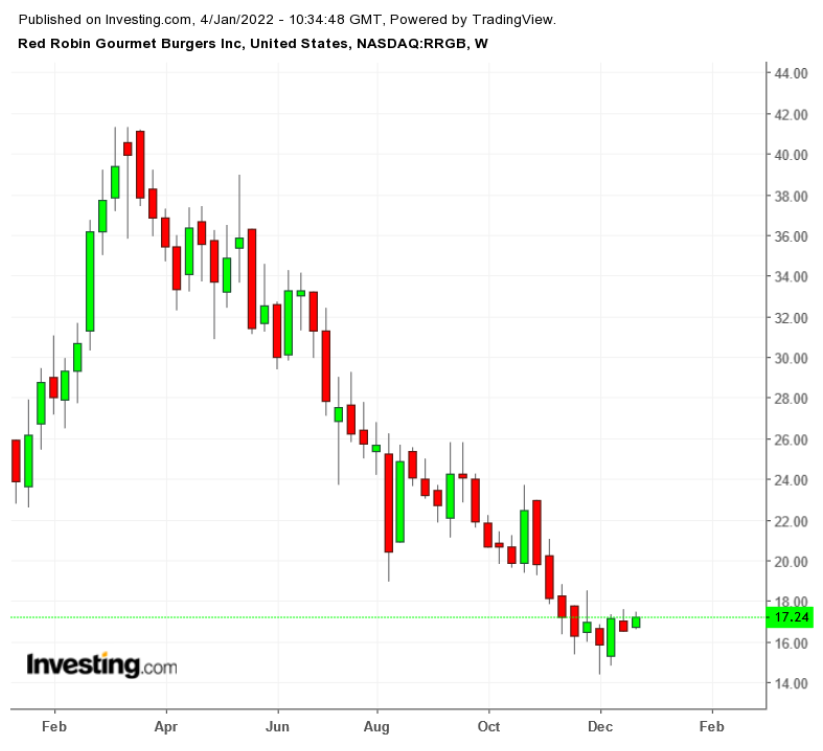 But the stock slumped 30% in the third quarter and an additional 28.3% in the fourth quarter as COVID worries made customers wary of dining inside restaurants.

With Russia’s designs on more of Ukraine, geopolitical tensions are accelerating. China’s interest in gaining control of Taiwan and Iran’s closing in on development of a viable nuclear weapon add to the headwinds.

Factor in the effects of climate change which include monster storms, wildfires, raging winter weather, plus the difficulty of getting the global community to come to a consensus on how to attack the problem and there’s yet an additional reason to be jittery.

Many fear the process could erupt in violence like the Jan. 6, 2021 riot at the U.S. Capitol building. Along with increased uncertainty, the process and potential events surrounding it could reduce confidence in American institutions.

Invest with your eyes open

But both developments add uncertainty to how any investors think about where to put their money.

Still, global tensions, COVID-19 (with all its variants) and climate change are all adding more layers of uncertainty into the market environment.