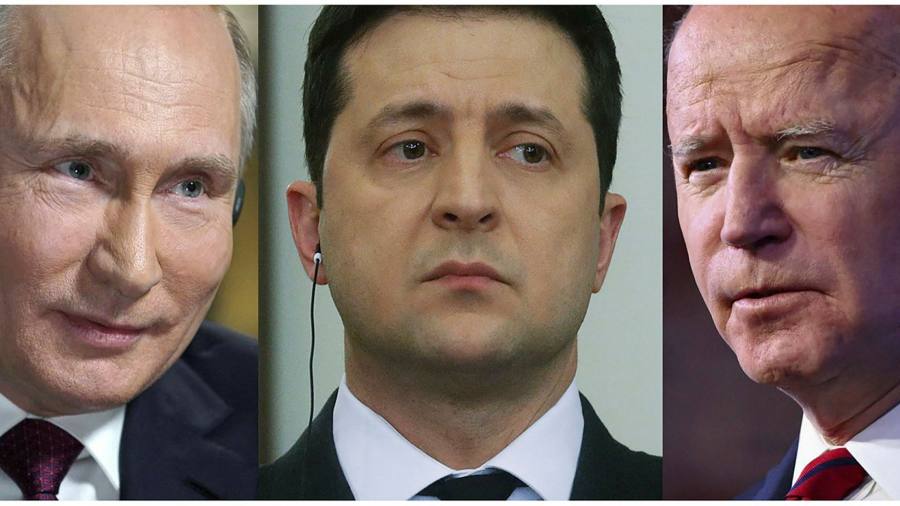 FirstFT: US warns Russia of ‘decisive’ action if Ukraine invasion goes ahead

The US and its allies will “respond decisively” if Russia invades Ukraine, President Joe Biden told his counterpart in Kyiv as tensions mounted over Moscow’s troop deployments.

The call between Biden and Ukraine’s president Volodymyr Zelensky yesterday was the latest diplomatic attempt to allay mounting tensions after Russia amassed about 100,000 soldiers on Ukraine’s eastern frontier. Washington, Moscow and Nato member states are set to meet for talks this month, when Russia intends to press for “security guarantees” to limit the military alliance’s expansion in Europe.

Biden “reaffirmed” America’s commitment to Ukraine’s “sovereignty and territorial integrity”, while after the exchange, Zelensky wrote on Twitter that the leaders had discussed “joint actions” by Ukraine, the US and partners “in keeping peace in Europe, preventing further escalation, reforms, de-oligarchisation”.

1. Tesla dodges supply woes to deliver record number of vehicles Tesla smashed its own production and delivery records in the final months of last year, shrugging off supply chain and other problems to hand customers the keys to more than 308,000 vehicles. Now Wall Street is forecasting another leap in sales to come.

2. Finland insists on right to join Nato Russia’s sabre-rattling in Ukraine has reignited the debate as to whether Finland should join Nato, defying Moscow’s demands that the military alliance limit its expansion in Europe.

3. Twitter bans US Republican lawmaker over misinformation Marjorie Taylor Greene, the Republican whose provocative social media posts have made her one of the most controversial members of the US Congress, has been permanently barred from Twitter after repeatedly posting misinformation about the pandemic.

4. Sudan’s prime minister resigns Two month after he was reinstated in the post, Abdalla Hamdok has resigned, saying a new round of talks with the military was needed on a stalled transition to democracy.

5. South Korean chip companies step up US lobbying efforts Samsung, Hyundai, SK Group and LG are ramping up their lobbying presence in Washington to navigate US-China tensions and win critical export licences to supply Chinese companies targeted by trade sanctions. The South Korean chipmakers are leading the efforts as they bow to pressure from Washington to produce strategically sensitive goods such as semiconductors and electric vehicle batteries in the US.

Happy New Year. What are you most looking forward to in 2022? Share your thoughts with us at firstft@ft.com and we may feature your response in an upcoming newsletter. Thanks for reading FirstFT Americas.

New Johnson & Johnson chief Joaquin Duato is set to become chief executive of J&J today, succeeding Alex Gorsky, who will move to the role of executive chair. See what else is in store for 2022 in our special edition of The Week Ahead newsletter.

Economic data IHS Market will give an idea of the health of the European manufacturing sector with December’s purchasing managers’ index. (WSJ)

M&A boom accelerates junior burnout at elite law firms Associates at the world’s top law firms have long viewed exhausting hours as part of a Faustian pact in which evenings, weekends and sleep are exchanged for eye-popping salaries. But junior lawyers have reached a breaking point as workloads soar and pandemic-induced anxiety and isolation rise.

Royal insider Anne Glenconner: ‘I’m not frightened of anything’ At birth, Glenconner disappointed men; ever since, they’ve disappointed her. So she has compensated. She spent three decades as lady-in-waiting to Princess Margaret. “It’s not that I don’t like men! But ones that are near to one are absolutely maddening,” she told the FT’s Henry Mance.

Ten economic trends that could define 2022 For a second year, the pandemic has reshaped the world, accelerating trends from population decline to digital revolution. Ruchir Sharma examines how these currents could define this year, from a slowing China to “greenflation” in commodity prices.

Climate change and the battle for Canada’s forests Centuries-old forests dotting the landscape in British Columbia, Canada’s westernmost province, have become a battleground for two schools of thought about curbing climate change: one that wants to use their biomass for green power, and another anxious to protect carbon-absorbing trees.

Pulp non-fiction: the worst business books of 2022 Some 10,000 business books are published annually in the US, the world’s biggest market. Almost all are unputdownable, of course, but inevitably just a few clunkers slip through publishers’ rigorous filters. Don’t miss Andrew Hill’s (entirely imaginary) examples of titles to avoid in 2022.

The eagerness to be at live performances, in-person events and experience art that’s tangible has not gone away. While pandemic uncertainty rocks the arts, here’s what to look forward to in a year of cultural highlights.

Sentiment Speaks: 2022 Can Be Your Best Year Ever