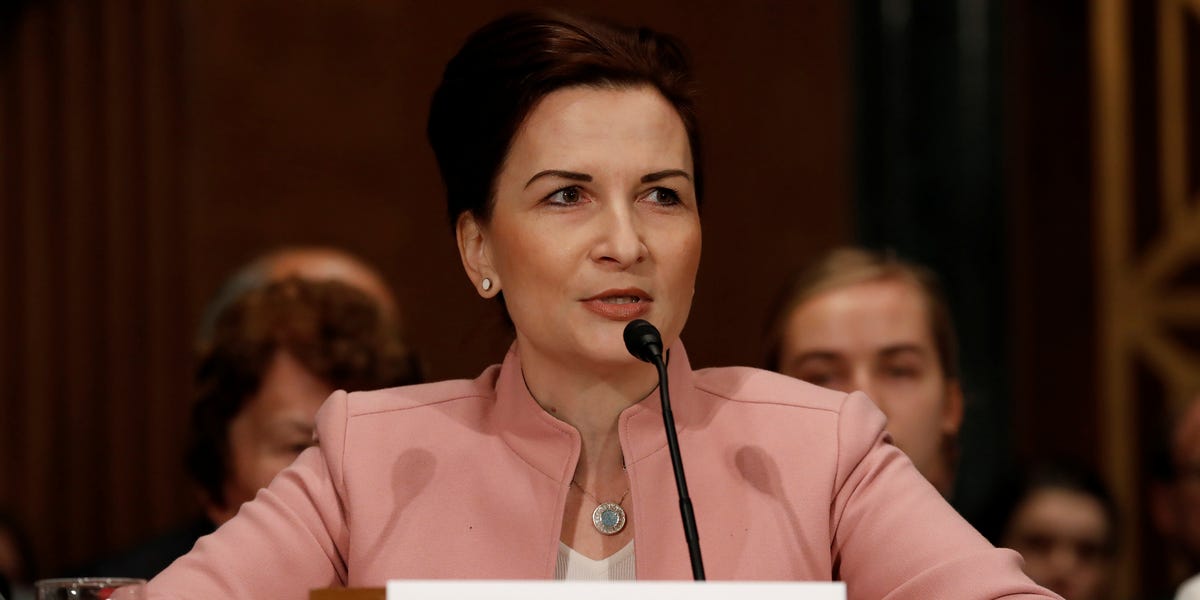 Trump-Appointed FDIC Chair Will Resign After Battle With Democratic Regulators


Federal Deposit Insurance Corporation Chairman Jelena McWilliams announced on Friday that she would step down from the post after clashing with Democratic regulators over the agency’s direction, a move that will give President Joe Biden greater influence over US banking policy, according to Politico.

McWilliams, a native of Yugoslavia who was appointed by former President Donald Trump to a five-year term in June 2018, said in a letter to Biden that her resignation would be effective February 4. In the document, she made no reference to infighting among the board.

McWilliams’ term was not set to end until June 2023.

“When I immigrated to this country 30 years ago, I did so with a firm belief in the American system of government,” said McWilliams in her letter to the president. “During my tenure at the

Board of Governors, the United States Senate, and the FDIC, I have developed a deep appreciation for these venerable institutions and their traditions.”

She continued: “Throughout my tenure, the agency has focused on its fundamental mission to maintain and instill confidence in our banking system while at the same time promoting innovation, strengthening financial inclusion, improving transparency, and supporting community banks and minority depository institutions. Today, banks continue to maintain robust capital and

levels to support lending and protect against potential losses.”

McWilliams is the sole Republican member currently on the FDIC board, and her resignation will create a second opening on the panel.

Her departure comes as Rohit Chopra, a member of the board and the director of the Consumer Financial Protection Bureau, said in December that McWilliams sought to block attempts by Democratic regulators on the panel to probe rules regarding bank mergers.

Last month, Chopra, along with Gruenberg and Michael Hsu, the acting comptroller of the currency, voted to solicit public comment on bank mergers. However, the statement of request was not placed on the FDIC site but on the site of the consumer bureau that Chopra oversees.

After a December 14 meeting, Chopra in a statement said that McWilliams “did not exercise her right to move the matter to a board meeting for discussion” and stated that the General Counsel deemed the supermajority’s vote to be “invalid.”

“This approach to governance is unsafe and unsound,” he expressed. “It is also an attack on the rule of law.”

In an op-ed that was published by The Wall Street Journal on December 15, McWilliams was critical of the push by the Democratic regulators, stating that their actions were not reflective the board’s “independence.”

“In the spirit of collegiality, I expressed to board members my willingness to work with them on a document drafted by the FDIC staff that would better reflect the agency’s historical approach and do so on an expedited basis to meet their desired timing,” she wrote.

She continued: “This conflict isn’t about bank mergers. If it were, board members would have been willing to work with me and the FDIC staff rather than attempt a hostile takeover of the FDIC internal processes, staff and board agenda. This episode is an attempt to wrest control from an independent agency’s chairman with a change in the administration.”

organizations pleaded for a return to civility among board members.

Republican Sen. Pat Toomey of Pennsylvania, a member of the Banking Committee, on Friday criticized the actions of the Democratic regulators.

“The recent, reckless effort by Director Chopra and Interim Director Gruenberg to take over the FDIC board leaves a dark mark on both the FDIC and their own personal records,” he wrote. “I am deeply troubled to see the administration support this extremist destruction of institutional norms and unprecedented action to undermine the independence and integrity of our financial regulators.”

He continued: “President Biden should move swiftly to fill the two vacant board seats and Interim Director Gruenberg’s seat with qualified individuals who will respect the FDIC’s tradition of operating free from partisan political interference.”