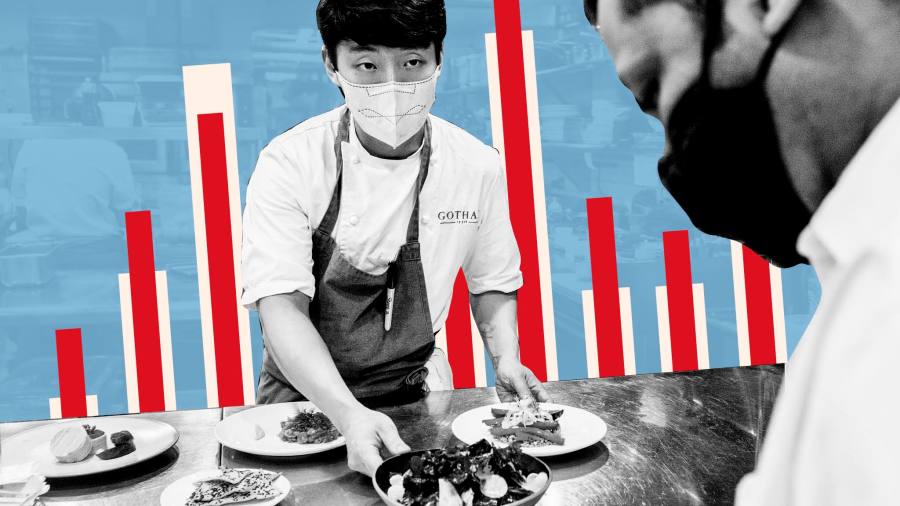 
The US government significantly underestimated the number of jobs created this year as it struggled to analyse data distorted by the effects of the pandemic, creating fresh challenges for policymakers navigating a highly volatile economic environment.

Over the course of 2021, the government agency that releases the monthly US jobs statistics has revised its initial estimates of payroll growth upwards by a total of 976,000 jobs, the highest such adjustment in a single year.

Revising past estimates to account for new data is a routine exercise: the initial estimate that the Bureau of Labor Statistics (BLS) calculates is updated twice, with the second estimate published in the next month’s jobs report and the third estimate published the month after that.

It is during major economic inflection points, however, that these numbers are not only hardest to measure, but also monitored most closely. That means data revisions, typically published without fanfare, suddenly have the potential to substantially alter conceptions of labour market health and in turn, how exactly policy should be fine-tuned.

“The economic fundamentals have been shifting at unprecedented speed. Not in my lifetime and not in the lifetime of most people alive today have we seen . . . an economic recovery that has been as rapid as it has been since the spring of 2020,” said David Wilcox, who used to lead the research and statistics division at the Federal Reserve. “The challenges of economic measurement in a pandemic environment are enormous.”

The pandemic has proved uniquely thorny for economists looking at the US labour market, because it has not only created lags in the reporting of data but also distorted the seasonal rhythms that are typically factored into estimates. The sheer size of payroll growth during the economic recovery has also created challenges.

“You’re taking an already difficult task and making it absolutely Herculean,” said Ernie Tedeschi, a senior economic adviser to the Biden administration as a member of the Council of Economic Advisers.

That difficulty was once again on display in the latest jobs report published on December 3, which showed just 210,000 new positions created in November. The unemployment rate tumbled further to 4.2 per cent, a far cry from the nearly 15 per cent level reached last year.

The numbers confounded economists, not least because of a sizeable gap between the two surveys that comprise the monthly report. The “establishment” survey of businesses, from which the headline jobs figure that is subject to revisions is derived, suggested a sharp slowdown in recruitment. The “household” survey of individuals, used to calculate the unemployment rate, showed a gain of 1.1m.

Further complicating the picture, the BLS updated its September and October numbers extensively, bringing September’s job gains to 379,000 and October’s to 546,000. Taken together, roughly 6m jobs have been recovered in 2021.

“Everything has been so much larger than it used to be,” said Stephen Crestol, an economist who has spent more than three decades at the BLS. “A big drop and large increases, we are not used to that.”

The task of estimating the payroll numbers during the pandemic has been complicated by two primary factors. First, an increasing share of businesses are turning in their survey responses late.

The agency has had trouble getting businesses to opt into the establishment survey during the pandemic, said Crestol. Participation, which is voluntary in all but three states, has halved since last February.

Even if businesses agree to fill out the survey, their responses may come in after the deadline for the initial estimate in the jobs report, which is released on the first Friday of the month.

To produce the first figure, the BLS calculates an expected payroll number for businesses that have not yet replied. Late responses are incorporated in subsequent revisions.

“In a normal month, you don’t get that much change in the bottom line,” said Erica Groshen of Cornell University and a former BLS commissioner. But in a year like 2021, marked by an intensely rapid economic recovery, the businesses that are slowest to respond could be recruiting most rapidly, she said, leading to larger upward revisions.

Economists look closely at the “seasonally adjusted” figures, because they are thought to offer the most direct view of ongoing trends once regularly occurring fluctuations in the data tied to events like the start of the school year are stripped out.

Retail businesses in November, for example, reported 331,600 more people on payroll compared with October. But the BLS adjusted that number downward because recruitment in the retail sector tends to pick up just before the start of the holiday season. The agency reported that the sector had “lost” 20,400 jobs after taking into account seasonal adjustment.

In total, the raw numbers showed payroll growth of 778,000 in November, which the BLS adjusted downward by 568,000, a record revision.

“The seasonal patterns are not some kind of law, they are just patterns,” said Betsey Stevenson, a professor of economics at Michigan university and a member of the CEA during the Obama administration. “Covid has done more to disrupt our patterns than anything I could have imagined.”

Seasonal factors are based on the past 10 years of data, with more weight given to recent years. In 2020, many movements were deemed outliers and not included in the adjustment model.

The model is continually tweaked as new data come in, leading to more revisions. “You get more data, then that affects your understanding of past seasonal trends,” said Nick Bunker of Indeed, the jobs website.

How the new coronavirus variant unfolds will determine if the recent waves of revision are set to crest or grow larger from here.

The implications are enormous for the US Federal Reserve, which is closely watching the employment situation for the green light to tighten monetary policy next year.

Christopher Waller, a Fed governor, said the central bank had already supplemented its models with high-frequency data and other sources, including the weekly ADP employment report.

“The more what we see going ahead is just recovering from a recession, then the better the statistical techniques are going to work,” said Groshen. “The more that it’s being driven by a new variant and a different policy response to it . . . the more the models may fail because they’re based on the past.”