Over a month ago, I that the topped 6p shy of the ideal upside target of SPX 4750-4800 I found weeks before that using the Elliott Wave Principle (EWP) and technical analysis. I then outlined:

“Now, the market will have to thread through a needle…[as], the upside potential is ideally around 120p on the SPX, while the downside risk is now potentially 300p. How do we know? A drop below the Nov. 10 low of SPX4630 without making a new ATH will be an excellent signal that SPX4350+/-50 is, at some point, most likely next. On the other hand, a rally back above SPX4725 will be a perfect signal that SPX 4800+ is next.” 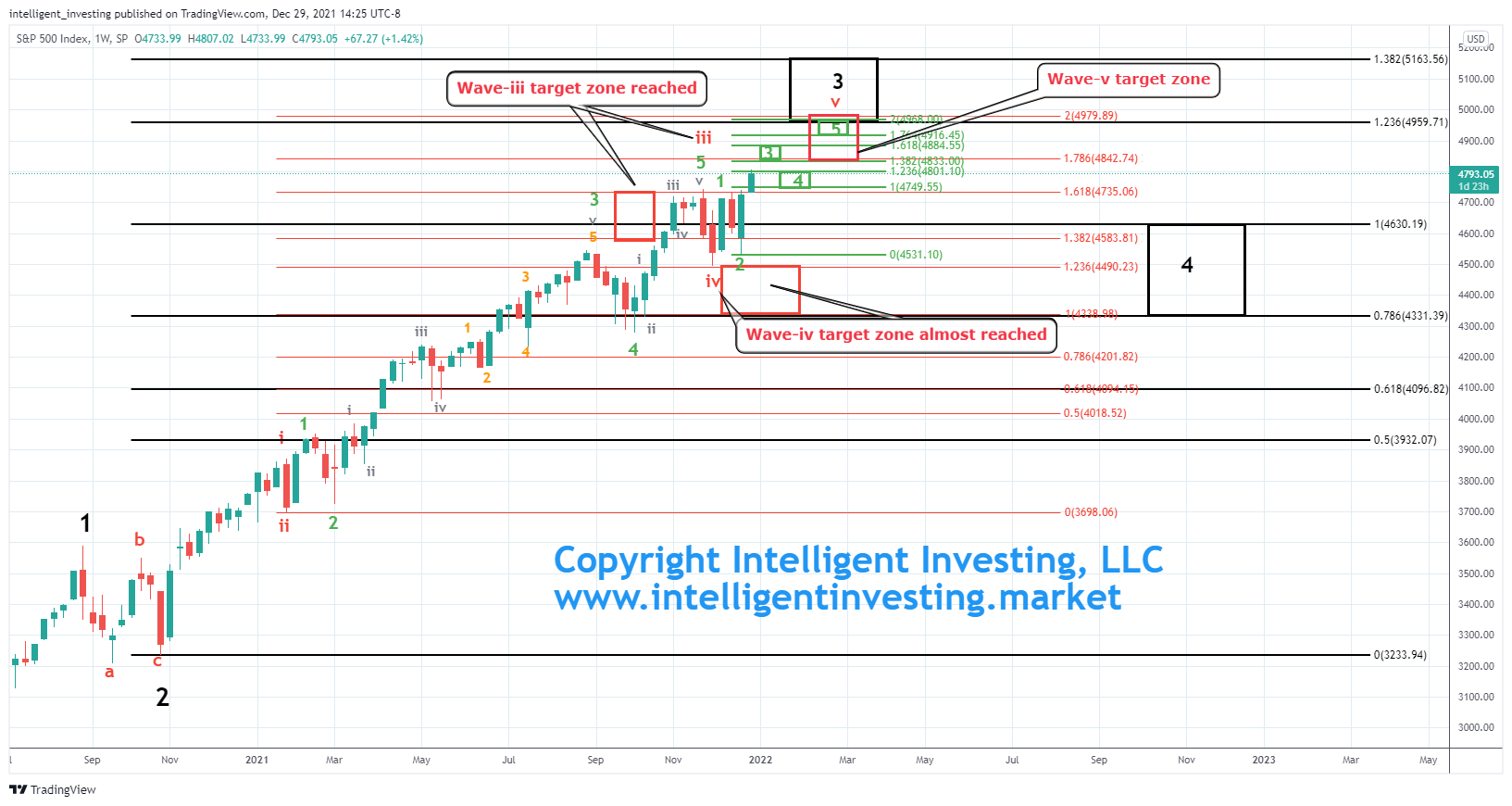 Besides, as I always say, “in bull markets, upside surprises and downside disappoints.” Since that low, the index has rallied to new all-time highs, and as I told my premium major market members since last week, “as long as the Dec. 20 low holds, I expect SPX 4975 to be reached.” Why? See figure 1 above.

Since 5th waves often target the 200% extension of the 1st wave, and comprise five smaller waves, i.e., the EWP is fractal in nature; it is logical to expect the SPX to reach SPX 4980. Besides, and albeit a bit hard to read on the chart, the five (green) minor waves that build (red) intermediate wave-v target ideally SPX 4968. This wave-v is then “only” the end of an even more significant 3rd wave, (black) major wave-3, which started in October 2020 at the major-2 low. Moreover, the 1.236x extension of wave-1 resides at SPX 4960. Thus, barring any unforeseeable extensions, there is Fibonacci confluence at SPX 4960-4980. Such a cluster often acts as a magnet for the market.

Bottom line: The S&P 500 lost the critical SPX 4630 in late November, bottomed 2% shy of my ideal downside target on Dec. 3, and now the index is already trading at new all-time highs. Thus, the SPX has so far carved out a nice 3rd wave top and 4th wave bottom almost precisely where it should have based on the typical Fibonacci extensions and retraces for these two waves.

Now, the next 5th wave should be under way, subdividing into five smaller waves and targeting SPX 4960-4980 ideally. Once that level is reached a more significant 3rd wave should top, and another multi-week correction should unfold before the (final?!) run to SPX 6000 gets under way. This anticipated EWP path should unfold if the Dec. 20 low at SPX 4531 holds.