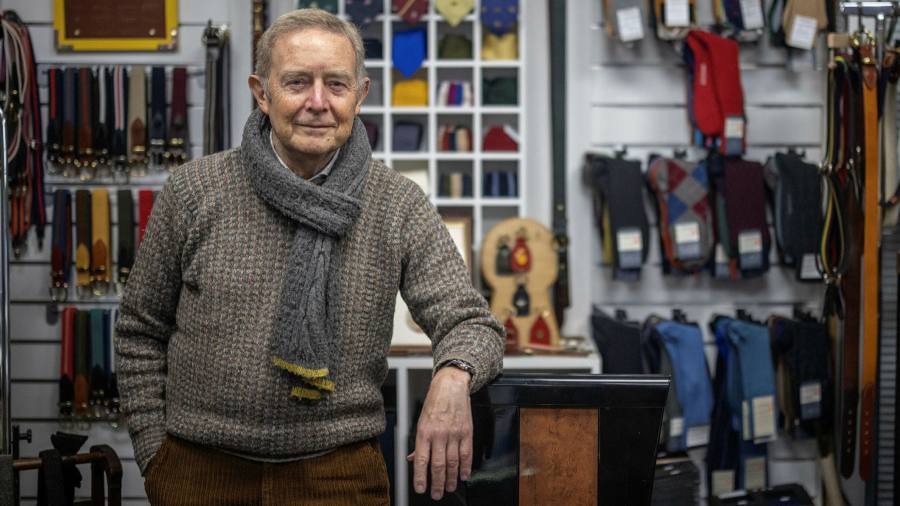 
Maurice Greig might have expected a well-earned break over Christmas, having spent 2021 struggling with the post-Brexit bureaucracy now required to export his tailor-made gentlemen’s accessories to the EU.

But instead the 74-year-old owner of the Greig & Greig Partnership gave up at least part of the festive season in order to pore over UK government technical guidance for new border controls about to be introduced on imports from the EU.

Starting in January, UK importers must complete customs declarations in real time; pre-notify the authorities of incoming animal and plant products; and be able to produce proof that the goods they are importing from the EU qualify for tariff-free access to the UK.

“It will do my head in,” said Greig in the stockroom of his London boutique, which is filled with samples of expensive handmade leather gloves, belts and fancy-handled Italian umbrellas. “but then I’m only a very small business, I don’t have anyone else to help.”

Business groups have warned that the new import controls, which were delayed by one year in order to keep trade flowing, will put considerable new pressure on small businesses in 2022 as they continue to adjust to trading outside the EU single market.

Greig & Greig is one of thousands of micro enterprises that the Federation of Small Businesses trade group has warned are insufficiently prepared for the new checks after a membership survey found that only a quarter of businesses were ready.

A survey from Institute of Directors, the bosses organisation whose members generally represent larger businesses, found one-third were “not at all prepared” for the changes.

Business groups and officials concede that it is impossible to predict exactly how the changes will impact the flow of imports from the EU, which in 2020 accounted for 50 per cent of all UK imports, worth £300bn.

Senior government officials responsible for the border told MPs in November that businesses were being contacted about the changes, including on the other side of the Channel, where EU hauliers and exporters will also need to get prepared.

The biggest source of concern about possible disruption comes from the requirement for lorries entering the UK to obtain an authorisation code from the UK’s goods vehicle movement services, or GVMS, prior to boarding a ferry.

To obtain the code, their paperwork must be in order. From January 1 this will mean customs declarations and duty payments can no longer be deferred by up to 175 days, and animal and plant products must be preregistered with the UK’s import of products, animals, food and feed system (IPAFFS).

Jim Harra, the permanent secretary at HM Revenue & Customs, told MPs on the public accounts committee that “undoubtedly” some EU lorry drivers would be turned away because of the new system but he was “confident” they would soon adapt.

From July food importers will also need their goods to be accompanied by health certificates signed off by EU vets and be ready to submit to spot checks if selected at UK border control posts.

Harra said government confidence was based on the fact that hauliers had adapted to a similar French pre-declaration system in 2021, when predictions of a reasonable worst-case scenario of tailbacks of 7,000 trucks failed to materialise.

Shane Brennan, chief executive of the Cold Chain Federation, said the requirement to gather customs and IPAFFS declarations, often in a tight timeframe, was likely to leave many EU hauliers “playing catch-up” in the early months of 2022.

HMRC said it had been sending 14,000 letters a month to EU hauliers to prepare them for the changes. However haulage groups in the EU told the Financial Times that they expected delays because they had been unable to pretest the GVMS system. HMRC said it was ‘live proving’ the system with selected organisations.

Artur Kalisiak, from TLP, which represents Poland’s big transport companies, said that while it was flagging UK government webinars to its members, 90 per of Poland’s 36,000 haulage companies were small operators with 10 vehicles or less.

Waberer’s, one of eastern Europe’s largest haulage groups, was more pessimistic, complaining that it had not been possible to pretest the GVMS system ahead of the January 1 launch date.

“We are certain there will be logjams, because we don’t know if the UK system can handle the claims flooding them,” said a spokesperson. “There will be a lot of clueless drivers backed up at the transit points.”

As well as new border controls, UK companies trading with the EU will need to show proof that their goods are eligible for tariff-free importation into the UK.

Under the so-called ‘rules of origin’ of the EU-UK Trade and Cooperation Agreement, goods must typically be 50 per cent made in the UK to qualify for export to the EU tariff-free. And vice versa for EU goods being exported to the UK.

In 2021 exporters on both sides were given a one-year grace period that reduced the required documentation, but from 2022 companies on both sides of the Channel will need to provide documentary proof that their goods comply if challenged by customs authorities.

In December HMRC told UK traders that if they failed to provide “supplier declarations” for goods they risked paying penalties or being barred from using preferential tariff rates in the future.

Trade groups have warned ministers that for smaller businesses the rules of origin process can be confusing and time-consuming, with many not fully appreciating the requirements.

Daniel Pettitt, managing director of Wiltshire-based Heaven Scent Incense, which makes scented soaps and candles using ingredients sourced from around the world, said he was grappling with the new rules.

“We’re starting to ask suppliers for declarations and we know that our products do qualify,” he said, but admitted he was not sure where the information proving this should be lodged when exporting to the EU.

He added despite plentiful emails from the government about the coming changes, online guidance was difficult to use. “It’s like falling down a rabbit hole. You click link after link to get to some website. You just get lost,” he said.

Tanya Marriott, the owner of SoleLution, an independent shoe shop in Bristol which imports shoes from the EU, said the company was still trying to work out its legal position in the event of a dispute over duty with EU suppliers.

“As a small business we’re trying to find our way. I’ve attempted to investigate via the HMRC website, and I don’t consider myself new to all this, but it’s not explained in layman’s terms,” she added.

Back in London, Greig of the gentleman’s accessories importer, is still trying to iron out this year’s problems, which include duty payments being charged erroneously on shipments that ‘originate’ in the UK and the EU.

“It’s going to be very complicated,” he says of importing his samples from the EU, “because I’m only a micro business. I don’t yet know what the rules are after January 1, but no doubt it will not be straightforward.”

Food and plant products pre-notification Businesses importing food goods that require so-called Sanitary and Phytosanitary checks must enter these into the UK’s import of products, animals, food and feed system (IPAFFS). They will still not need export health certificates or physical veterinary inspections on arrival.

EU hauliers to be pre-authorised Lorry drivers entering from the EU will need to show they have the above documentation to obtain a pre-authorisation code to board ferries. They will obtain this via the goods vehicle movement service (GVMS).

Rules of origin requirements enter into full force UK businesses wanting to take advantage of zero tariff access for EU imports will need to ensure products from the EU are supported by suppliers’ declarations proving the goods are sufficiently EU-made to qualify for tariff-free access. And vice versa for EU importers of UK goods.

Physical checks and certification introduced Plant and meat products from the EU will need to be accompanied by export health certificates and will be liable for physical inspections by UK port health authorities.