Japanese industrial output jumped in November by the largest margin since 2013, providing hope that the country’s automotive sector could finally be moving beyond its semiconductor supply struggles.

Industrial production increased 7.2 per cent last month compared with October, significantly exceeding economists’ forecasts. The improvement was driven by a 43.1 per cent month-on-month resurgence in car production, said analysts, who noted that other manufacturers appeared to be rebuilding exhausted inventories more rapidly than expected.

Takuji Aida, chief economist at Okasan Securities, said that while overseas parts procurement was stagnant, it appeared that supply chain problems that have afflicted Japanese manufacturers were gradually being resolved.

The monthly data released by the Ministry of Economy, Trade and Industry represent Japan’s last major economic release of the calendar year. The November increases followed October’s more modest 1.8 per cent gain from the previous month.

The government also issued an upward revision of its overall assessment of industrial production, saying the manufacturing sector was “showing signs of recovery” after having previously rated the situation as “at a standstill”.

Analysts at Goldman Sachs, who had forecast a 4.8 per cent increase, noted that the production index had recovered to just below its pre-pandemic level in January 2020.

“While monthly production will likely fluctuate amid lingering supply shortages for semiconductors and other components, it appears to be returning steadily to a solid growth track,” wrote Yuriko Tanaka, a Goldman Sachs economist, in a note to clients.

Investors reacted positively to the data, with the benchmark Topix closing up 1.37 per cent higher on Tuesday.

But while some interpreted the numbers as a potential leading indicator of more sustained gains during the final quarter of the financial year ending in March 2022, others were more guarded.

Kazuma Maeda, an economist at Barclays Securities Japan, cautioned that while some automakers expected production to reach last year’s levels this month, “making up for lost production and stockpiling inventories will require more production than usual”. 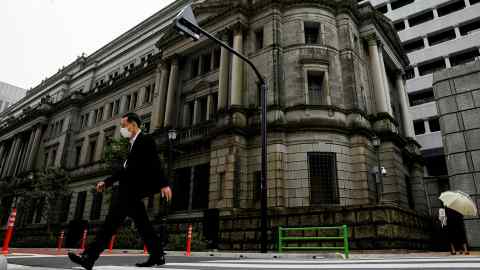 “It’s unclear how much production can be increased given the potential impact of the Omicron variant on the supply chain,” Maeda added, echoing a warning from Meti, and noting that China’s economic slowdown and weaker orders could hit Japan’s overall production.

Takashi Miwa, chief Japan economist at Nomura Securities, added that January could generate a degree of downside risk as the variant spreads. “Some manufacturers have already announced downward revisions to production for December and January, so we should be a bit cautious about what will happen in the fourth quarter,” he said.

“That could negatively affect production and tighten the supply side constraints for technology, IT and other industries that depend on semiconductor supplies.”