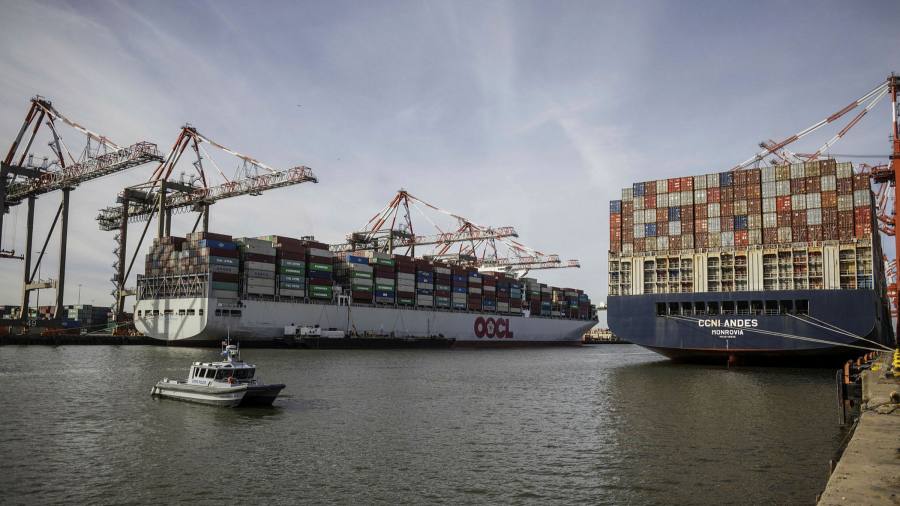 
A small group of hedge funds is enjoying some of the best trades in years thanks to huge volatility in shipping charter rates, fuelled most recently by the collision of the Omicron coronavirus variant with the reawakening global economy.

Dry bulk shipping rates have surged to their highest levels since the 2008 financial crisis this year while container rates have also shot up, buoyed by a recovery in global demand and congestion at ports. For consumers, that is feeding through to higher inflation. But for some specialist hedge fund traders, it is offering just the sort of big price moves they love.

Demetris Polemis, principal at Guernsey-based hedge fund Paralos Asset Management, said price rises and volatility in dry bulk rates this year have “led to some of the best trading opportunities we have seen since we started Paralos in 2011”. The fund, which manages about $450m in assets and which trades futures on the indices that make up the Baltic Dry index, has gained 110 per cent this year to the end of November, its best year of returns since launch.

Restrictions due to the emergence of the Omicron variant and high energy and commodity prices “point to a high but volatile market for next year”, he added.

Investment group Pilgrim Global, run by former Fidelity portfolio manager Darren Maupin, is up about 117 per cent this year, according to numbers sent to investors, with roughly three-quarters of gains this year coming from shipping.

Funds that use algorithms to latch on to data patterns are also profiting, including AHL, the computer-driven unit of $139.5bn-in-assets hedge fund firm Man Group. Its Evolution fund, which trades a range of markets, has gained 16.9 per cent this year.

Hedge funds on average are up 8.7 per cent in the first 11 months of this year, according to HFR.

Shipping has been out of favour with many investors for years, given its low returns and repeated cycles of booms and busts. Even in the hedge fund world, which is more accustomed to trading tricky markets, it is a niche sector, although it has become more popular with some computer-driven funds in recent years as they search for new, untapped markets to bet on.

After trading within a range for much of the past decade, container and dry bulk rates have exploded this year, yielding funds their reward. The Baltic Dry index, which measures rates for transporting commodities such as iron ore and coal on various shipping routes, is up 75 per cent this year. It has been pushed higher by strong demand for commodities and delays at ports due to coronavirus such as border restrictions and shortages of crew and pilots to guide ships, as well as the blockage of the Suez Canal in March.

The index had been up by more than 300 per cent in October, before Chinese authorities intervened to push down coal prices and problems escalated at indebted property developer Evergrande. The Freightos Baltic container index, which tracks container shipping rates, is up by about 180 per cent, having suffered less of a drop this autumn. Front-end rates can be very volatile because shipping is akin to a commodity that cannot be stored.

Hedge funds can profit from such volatility. Paralos, for instance, bet this autumn that volatility was priced too cheaply relative to the threat of typhoons in China. It scooped up options on the Capesize index, the index for the largest of the four categories of ships in the Baltic Dry index. Such derivatives soared in price, with some rising more than tenfold, as the storms forced delays at ports.

London-based Svelland Capital, meanwhile, had been expecting higher Chinese oil imports to push oil prices higher this autumn. As well as buying crude, it also bought shipping futures and tanker stocks, before selling out in late October after they moved higher.

And while some managers have given back portions of their gains during the autumn’s fall in prices, others have been able to profit. Norway-based Joakim Hannisdahl, chief executive of Cleaves Asset Management, has gained 34 per cent this year, profiting from a surge in shipping stocks for much of the year before starting to bet on falling prices as rates dropped.

With the rapid rise of Omicron infections leading governments to start imposing social restrictions once more, some fund managers expect some shipping rates to stay elevated in 2022. Looming new regulations to curb carbon emissions in the industry could also force ships to reduce their speed, some traders say, which could reduce capacity and push rates higher.

Renaud Saleur, a former trader at Soros Fund Management who now heads Anaconda Invest, has been increasing positions in operators of crude oil tankers. Despite gains this year, rates in this area of the market are well below their mid-noughties peak, but Saleur expects them to be pushed higher by a declining supply of ships as older boats are scrapped.

Cato Brahde, chief investment officer at Oceanic Investment Management, is positioning for volatility as ships transition to cleaner fuels. This, he believes, could create a “supercycle in shipping and energy investments similar to that experienced with China joining the world economy 20 years ago”.

Current Health System Is ‘Unsustainable,’ Only Working for Pay