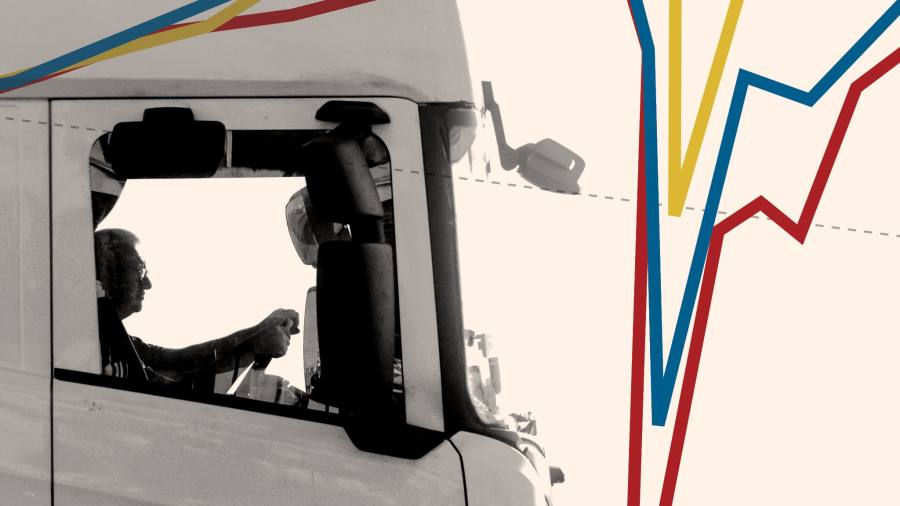 Brexit one year on: the impact on the UK economy


At the end of the first year of new trade terms between the UK and EU, Brexit has been most notable by the absence of drama at Britain’s borders.

There have been few tailbacks at the ports and little noticeable disruption to the flow of trade. But activity has been much lower than expected, even ahead of tighter import controls coming in next year, especially on food and agricultural goods.

Brexit’s overall effect on the UK economy and people’s living standards appears to be negative but uncertain, according to economists.

They say growth has been already hit by the new rules which kicked in on January 1 when the UK officially left the bloc. Over time, these could leave the country roughly 4 per cent worse off than it would have been had the 2016 EU referendum gone the other way, according to the Office for Budget Responsibility.

The debate among economists on Brexit has rarely been about whether there would be a hit to growth and living standards, but rather how big a hit.

The exact costs remain unknown because the effects have not been immediate, economists say, and are difficult to disentangle from the impact of the coronavirus crisis.

One of the simplest measures to assess Brexit, say economists, is to examine the UK’s overall performance since the June 2016 referendum until now, thereby taking account of the uncertainty created by the Leave vote as well as the country’s experience since.

UK growth has lagged behind the US and the eurozone. Gross domestic product in the UK was 3.9 per cent higher in the third quarter of 2021 than in the second quarter of 2016. Over the same period, however, the eurozone produced 6.2 per cent growth and the US 10.6 per cent.

While the underperformance of the UK economy is not disputed, it could have many causes apart from Brexit.

Economists worry that variations in counting GDP by the ONS have potentially temporarily depressed the UK number. So too are they concerned by different underlying rates of growth which have nothing to do with Brexit, and varying experiences of the Covid-19 pandemic.

With these potentially confounding causes of economic weakness, analysts have attempted more direct measures of the Brexit effect, concentrating on the impact on trade.

John Springford, deputy director of the Centre for European Reform think-tank, estimated the likely UK trade performance based on a model, “doppelgänger UK”, derived from the performance of similar countries.

The model showed that as of October, the latest month for which data is available, UK imports and exports of goods were 15.7 per cent below the level that could have been expected had the UK not left the EU’s customs union and single market in January.

The analysis points to a picture that, along with EU nationals leaving, Brexit has “made it harder for the supply side of the British economy to adapt to the reopening of [sectors after lockdown was lifted],” Springford said.

He added that uncertainty and sterling’s depreciation following the referendum have left the economy on track to lose around 4 to 5 per cent of national income compared with expectations had the UK voted Remain.

Julian Jessop, an independent economist and fellow at the Institute of Economic Affairs think-tank, did not disagree that Brexit has so far been a minus for the economy, even though he supported the UK decision to leave the EU.

“There’s not a lot of doubt that the things you can measure have been negative,” he said.

Jessop added that lower trade would lead to lower growth, but how trade activity would affect the economy was “extremely uncertain”. Still, the detrimental effects of reduced trade with the EU would diminish over time, he said.

While the debate is now less heated, Springford did not dissent from the view that the overall economic hit was likely to be unclear. He said the “big question” for economists was will the trade effects translate into GDP losses.

If the trade performance in goods has been negative to date, Sarah Hall, professor of economic geography at Nottingham university, thinks the effect on the UK service sector is more of “refocusing geographically” than of large losses.

Her research showed that UK services exports in the second quarter of this year were 14 per cent down on two years earlier, globally, reflecting the effect of Covid-19, especially on tourism. However, exports to the EU were 30 per cent down, suggesting an amplified impact on business with the continent.

Hall expects the UK will try to reorganise its service sector over time to be more of a global hub, especially in finance, and believes this has some chance of success. While the end result would be negative, she said, it would not be “apocalyptic”.

Shortages of lorry drivers, farm labourers and abattoir workers have showed up teething problems in the ending of free movement of labour. However, economists have been surprised by the smooth introduction of a new visa regime to stem the losses.

Jonathan Portes, professor at King’s College London, said there was no surprise that there had been a “very large fall in EU immigration” because anyone who had wanted to come to the UK would have done so before visas were required in 2021.

“We’ve seen skilled work visas are substantially up on the pre-pandemic period and, in particular, the health and care visas have seen a huge take up,” he said. “There has been a swift reorientation for the NHS from EU workers to non-EU.”

“I didn’t think the Home Office would be able to deliver a new system,” he added.

Economists have stressed that data comparisons are still highly uncertain.

New imports rules being implemented in the first half of 2022 threatened to add more friction, said Springford, but commitments from HM Revenue & Customs to prioritise trade flow over controls implied there will be only a minimal additional negative effect.

“HMRC will change the procedures if the new rules are creating a lot of problems at the border,” he predicted.

Kristalina Georgieva, managing director of the IMF, summed up the UK position in mid-December. While acknowledging specific problems clouding the medium-term outlook, she said “we are in no position today, yet, to identify to what extent this is due to the pandemic and what role Brexit may play in it”.

The advice from the outside, therefore, is that Brexit has done some harm to UK living standards and all efforts should be made to patch up its relationship with the EU to minimise further damage.

Should WisdomTree U.S. Dividend exFinancials ETF (DTN) Be on Your Investing Radar?