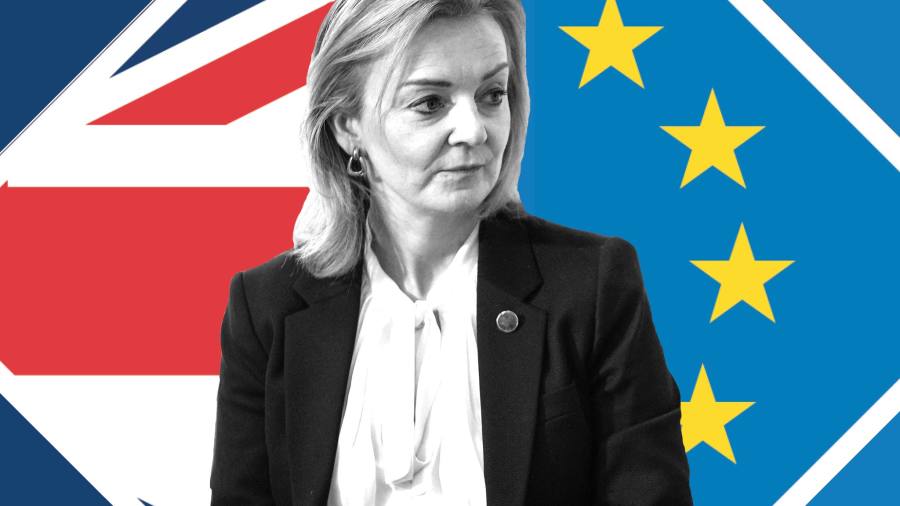 
Liz Truss, the UK’s new Brexit negotiator, will be faced with exactly the same dilemma as her predecessor, Lord David Frost: compromise with Brussels or risk a trade war, diplomats in Brussels have said.

Several welcomed prime minister Boris Johnson’s decision to hand his foreign secretary the role in the hope that she and her team would try to forge a broader, more positive relationship with the EU. But they warned that to achieve success would require a more emollient British approach.

“It’s good the Foreign Office is getting involved again,” said one EU diplomat. “Let’s give her the benefit of the doubt but I fear more of the same.”

Weeks of talks over the Northern Ireland protocol, which governs trade with the region, remain unresolved, with Frost repeatedly warning he could trigger Article 16 of the protocol to suspend large parts of it, which would spark retaliation by the EU.

Officials in Brussels have said this could range from tariffs on British goods entering the bloc to the suspension of the post-Brexit trade deal.

“Our position . . . particularly on the protocol, does not change depending on who is holding the position on the other side,” European Commission chief spokesman Eric Mamer told reporters on Monday.

The EU believes its proposals to cut customs and health checks on goods moving between Great Britain and Northern Ireland would substantially reduce trade disruption, caused by both sides’ wish to avoid a trade border on the island of Ireland. It also maintains that the UK should implement a deal it agreed only two years ago, rather than undermine it.

“We do hope for a constructive partner who re-establishes trust in the UK,” another diplomat said. “At the same time, we need to be prepared for a Frost 2.0 style of confrontation.”

“She is a politician where Frost was not, so perhaps she can get something out of a space where he was more destructive,” said another EU official. “But Boris Johnson calls the shots, so domestic UK politics will always dictate what happens.”

Johnson only last week approved a big climbdown in the UK position that diplomats say could pave the way for a deal.

He accepted that the European Court of Justice would continue to play a role in the operation of the protocol in return for a scaling back of checks at British Irish Sea ports for trade with Northern Ireland.

In a separate dispute the UK gave French boats more licences to fish in its waters, although Paris said it was too few and it will ask Brussels to take legal action.

Truss, who was handed the Europe portfolio the day after Frost resigned on Saturday, tweeted that she would talk to EU negotiator Maros Sefcovic on Tuesday — despite talks being paused until January 10.

Some Tory Eurosceptics believe that Truss, a former Remainer with prime ministerial ambitions, will take a tough stance in negotiations to prove her mettle to the Tory rightwingers who could ultimately decide who succeeds Johnson as prime minister.

“She’ll be no less tough than Frost,” said one Tory MP. A Whitehall insider added: “Liz has been one of the most hawkish ministers on the protocol.”

Downing Street, asked if Truss’s appointment would see a change in the UK position, declined to comment.

Other Tory MPs said Truss would stick to the course set by Johnson and that, as foreign secretary, she was aware that US President Joe Biden’s administration would react badly to any further ructions on the Northern Ireland issue.

“She’s got no choice but to compromise,” said one former minister. “We can’t afford to have another year of toxic messing around.”

George Osborne, former chancellor, said of his former ministerial colleague: “The capable Liz Truss now has the tools to be the most powerful foreign secretary for many decades.”

While Truss will have broad responsibility for EU relations, Tory Eurosceptics believe most of the line-by-line negotiating on the protocol will be done by her newly appointed deputy, Chris Heaton-Harris, who becomes Europe minister.

Heaton-Harris, a former MEP and former chair of the pro-Brexit European Research Group of Conservative MPs, is viewed by Tory backbenchers as a brake against any significant new concessions in negotiations.

Peter Bone, a Tory Eurosceptic, said Heaton-Harris was “a determined Brexiteer” and, as a part-time football referee, would be “more than willing to show the EU a red card if necessary”.

Chart Of The Day: E-Tail Giant MercadoLibre Tops Out Despite Positive Fundamentals