The S&P 500 has climbed roughly 25% in the past year, with the Nasdaq up 19%. The benchmark index currently hovers around 2.5% off its recent records, while the teach-heavy index is about 6% off the pace. The recent wave of selling and volatility that began on Black Friday could continue into the early days of 2022, as Wall Street assesses the Fed’s updated outlook and possible disruptions from the latest covid variant.

The central bank said earlier this week that it plans to complete tapering in March, cutting its timetable from June, as it winds down its stimulus-focus bond purchases. Wall Street was more focused on Jay Powell and the Fed’s updated outlook for interest rate hikes amid nearly 40-year high inflation.

The Fed expects they will start to lift rates in the second half of 2022, with three hikes projected next year and three more in 2023. The guidance gives Powell and his peers more time to see how the economy is performing, with hikes only truly likely once there are stronger feeling the pandemic is fully behind us, or if rising prices get too out of control.

The near-term economic uncertainty is clear. Yet, it doesn’t appear the political will is there for another round of lockdowns in the U.S. It is also worth remembering that the two most important factors that drive stock prices over the long haul, earnings and interest rates, continue to flash bullish signals.

For instance, even if the Fed started to lift its core rate sooner than projected, it will take some time to get to levels that make stocks look unattractive. The 10-year U.S. Treasury has rarely and barely moved above 3% since the financial crisis and if rates were pushed back up to the 4% and 5% levels of the 2000s, U.S. debt servicing costs turn far more daunting.

Plus, U.S. bonds, even at their current levels, with the 10-year at 1.4%, are far more appealing compared to near the zero or even negative rates in other major economies such as Germany or Japan. And the S&P 500 earnings and margin outlook for 2022 and 2023 remains historically impressive (also read: Making Sense of Evolving Earnings Estimates).

Circling back to the market, the strength and massive impact of mega-cap technology stocks have covered up the fact that many one-time covid high-flyers have already given up a year’s worth of gains to trade at new 52-week lows in late December. Cathie Wood’s widely-popular ARK Innovation ETF (ARKK), which is full of growth names from Tesla (NASDAQ:) to Roku (NASDAQ:), is trading around where it was before the 2020 election and down 40% from its February 2021 peaks—though it popped 6% Friday.

This appears rather bullish for 2022 and beyond since Wall Street already chopped down and greatly recalibrated valuations for many growth names that soared out of control off the covid lows. Other far more stable names have also been caught in the selling, as Wall Street takes profits.

Therefore, now appears to be a solid time for long-term investors to consider buying strong stocks at discounts for 2022 and beyond… 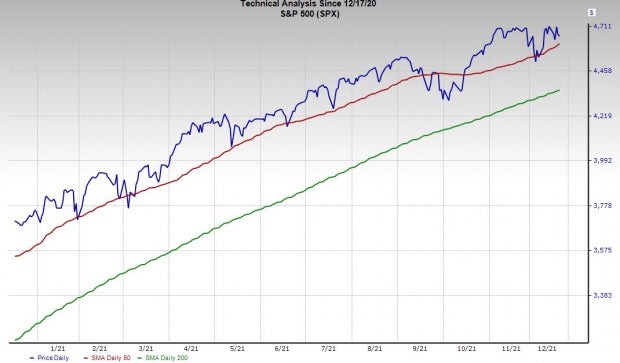 Align’s Invisalign system changed the orthodontics industry forever. Its clear aligners are true alternatives to traditional metal braces that have continued to grow at a rapid pace since Align’s founding in the late 1990s. Align’s innovation and success spurred other clear aligner firms to enter the market from SmileDirectClub (NASDAQ:) to Candid. Despite the competition, Algin has remained the dominant force in the space and is poised to continue its reign.

Align offers people the ability to straighten their teeth and correct other orthodontics-related issues in a far less visible and clunky fashion, most often at far more affordable prices. ALGN’s business model also includes tons of technology, from digital teeth scanners and beyond, which is part of its expanding end-to-end solutions.

Wall Street and patients love that Align works hand-in-hand with dentists and orthodontists who digitally scan a patient’s teeth in person and work with them through the entire process. Meanwhile, many of its competitors committed to an e-commerce-focused approach. Align is also expanding its reach both internationally and in the teenage demographic, as it successfully attracts more people who might have otherwise used traditional metal braces.

Align had helped treat 11.6 million patients by the end of Q3. The quarter also saw it top our estimates, with revenue up 38% and teen volume at record highs. Zacks estimates call for its FY21 to soar 60% to $3.9 billion, with FY22 projected to come in 21% higher to $4.77 billion. These estimates follow a five-year streak of 25% average sales growth—dragged down by +3% in covid-hit 2020. Meanwhile, its adjusted earnings are projected to skyrocket 111% this year and then another 21% in FY22.

Align has crushed our bottom-line estimates in the trailing four quarters and its FY21 and FY22 consensus estimates have gone up since its Q3 release. ALGN, which lands a Zacks Rank #3 (Hold) right now, has improved its balance sheet in the last year and its continually increased its stock buyback program. Plus, eight of the nine brokerage recommendations Zacks has are “Strong Buys.”

Align shares have soared 500% over the last five years, with its run over the past decade far more impressive—up 2,400%. It’s cooled off a bit more recently and closed regular hours Friday about 15% below its September highs and is now sitting around where it was in February. ALGN also hovers well under neutral RSI levels at 41 and it trades at a discount to its own three-year median in terms of forward 12-month earnings.

Salesforce beat Q3 FY22 estimates on November 30. Still, CRM, which had been trending downward heading into the report, tumbled on lower-than-projected near-term guidance. Wall Street also didn’t appear to love the appointment of new co-CEO Bret Taylor—who was COO since 2019—alongside Marc Benioff. The move returned the company to the co-chief executive structure it operated under for around two years until Keith Block step down in early 2020.

Salesforce shares hover about 20% below their early November records and beneath where they were in August 2020. Better yet, CRM’s Zacks consensus price target represents 27% upside vs. its current price. Buyers have also steeped in twice in the last several weeks to prevent CRM from falling below its 200-day moving average and the stock hovers right near oversold RSI levels (30 or under) at 34. 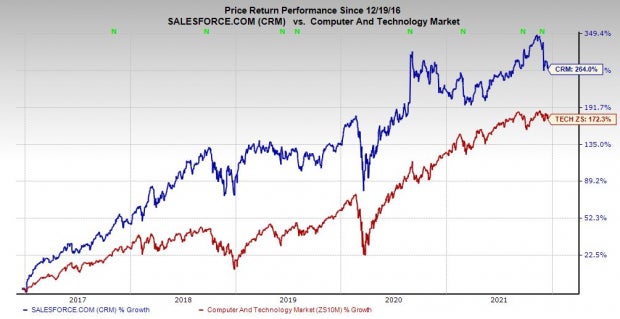 These are rather attractive levels considering Salesforce’s standing in a huge growth industry that becomes more important by the day. Salesforce and its various subscription-based business software support sales, marketing, commerce, customer and client engagement, analytics, app development, and much more.

Salesforce is also set to play an even larger role in the business and enterprise software world via two major acquisitions in the last few years. It bought Tableau in 2019 to improve its data-analytics side and it completed its $28 billion Slack deal in the summer to help it stand out in the crowded non-email communication world. And CRM’s sales have soared between 25% and 30% in the last five years.

Looking ahead, Zacks estimates call for Salesforce’s revenue to climb 24% this year and another 20% in its FY23 to $32 billion. Plus, its FY22 and FY23 Zacks consensus EPS estimates have popped since its report to help CRM land a Zacks Rank #1 (Strong Buy) right now.

CRM has crushed our EPS estimates by an average of 44% in the last four periods. And 24 of the 28 brokerage recommendations Zacks has for Salesforce right now are “Strong Buys,” with nothing below a “Hold.”

Garmin was at the forefront of the modern consumer-focused GPS movement. Today, its in-car navigation systems, fitness wearables, smartwatches, and more are staples in our connected world. Consumers want to track everything from their steps and heart rates to elevation climbed. Garmin’s Fitness and Outdoor segments are by far its two largest top-line contributors.

Along with its everyday consumer electronics, Garmin sells high-end fish finders, advanced radars and systems for boats and airplanes, and even sci-fi sounding tech for flying taxis. Its diverse and compelling offerings have helped GRMN post five-straight years of revenue growth, with sales up 11.4% in 2020.

Most recently, Garmin beat our Q3 earnings and revenues estimates at the end of October. Peeking ahead, Zacks estimates call for GRMN’s fiscal 2021 sales to climb 18.4% to $4.96 billion, with FY22 set to pop another 7% higher. Meanwhile, its adjusted EPS figures are expected to jump by 10.5% and 9.4%, respectively.

Garmin’s stock price fell after its Q3 release on the back of a slightly subdued outlook for 2022. GRMN is now down 27% from its late-August records at $132 a share and it’s approaching oversold RSI levels once again at 34. Despite the pullback, Garmin has matched the broader Zacks tech sector over the past five years, up 170%. And GRMN, which lands a Zacks Ranks #3 (Hold) right now, has crushed our bottom-line estimates by an average of 27% in the trailing four periods.

Garmin’s recent fall has recalibrated its valuation, with it trading at a discount to its own three-year median and 20% below its industry’s average at 21.7X forward 12-month earnings. Better still, GRMN is now trading right near year-long lows and beneath where it was prior to the initial covid selloff.

Along with a possibly attractive entry point, Garmin management runs an extremely financially sturdy operation, with no debt on the books and $3.2 billion in cash and marketable securities, alongside $7.6 billion in total assets vs. $1.7 in liabilities. And its 2% dividend yield tops the 30-year U.S. Treasury and blows away the S&P 500 average.

Blockchain and cryptocurrency has sparked one of the most exciting discussion topics of a generation. Some call it the “Internet of Money” and predict it could change the way money works forever. If true, it could do to banks what Netflix (NASDAQ:) did to Blockbuster and Amazon (NASDAQ:) did to Sears. Experts agree we’re still in the early stages of this technology, and as it grows, it will create several investing opportunities.

Zacks’ has just revealed 3 companies that can help investors capitalize on the explosive profit potential of Bitcoin and the other cryptocurrencies with significantly less volatility than buying them directly.

Want the latest recommendations from Zacks Investment Research? Today, you can download 7 Best Stocks for the Next 30 Days. Click to get this free report