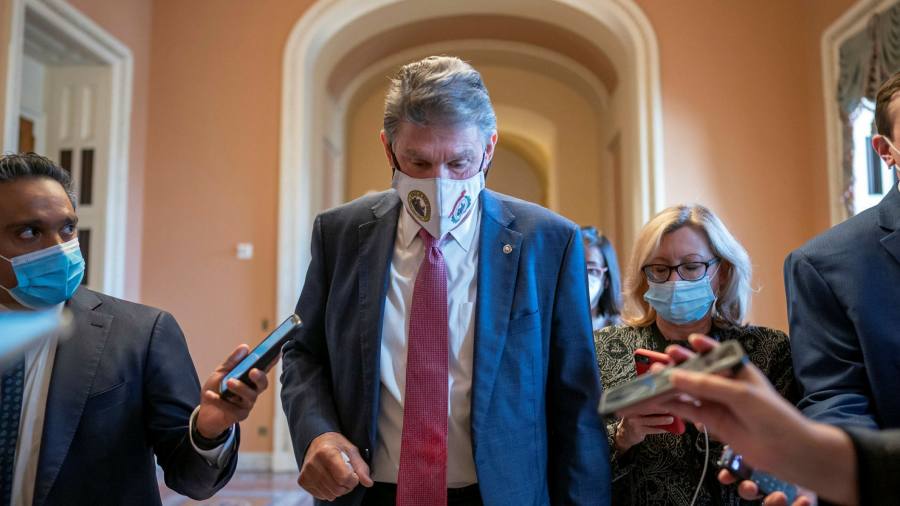 
The White House is rushing to save its plans to pass Joe Biden’s $1.75tn Build Back Better bill by the end of the year, with time running low to win over Democratic holdouts worried about excessive spending and persistent inflation.

On Monday afternoon, the US president spoke with Joe Manchin, the Democratic senator from West Virginia who has proved a frequent obstacle to passing Biden’s domestic agenda.

“The president and Senator Manchin had a good, constructive phone call and agreed to follow up with one another in the coming days,” Andrew Bates, a White House spokesperson, told the Financial Times.

Manchin told reporters on Monday that he had a “good conversation” with the president and remained “engaged” in negotiations.

“We are still talking about different iterations, that’s all,” the senator said. When asked whether a deal could still be done by Christmas, Manchin replied: “Anything is possible.”

The call marked the president’s latest attempt to reach a deal on his flagship economic proposal, which directs large-scale government investment into safety-net programmes and measures to fight climate change.

But the fate of the legislation, which would be paid for largely with tax rises on the wealthy and big businesses, is still uncertain with less than two weeks to go until Democrats’ self-imposed deadline to pass it before Christmas.

Charles Schumer, the Senate majority leader, had initially suggested the upper chamber of Congress would begin poring over the bill this week after the House of Representatives passed it last month.

But many in Washington remain sceptical the bill will arrive on the president’s desk before the end of the year, given Manchin’s resistance.

“I know people have been in a hurry for a long time to do something, but I think basically we are seeing things unfold,” Manchin told reporters on Capitol Hill earlier on Monday. “I basically go and have conversation whenever the president calls me or wants to visit . . . we talk genuinely, as person to person, as two people who have had the experience of being in the Senate.”

Jen Psaki, White House press secretary, said the Biden administration remained “fully supportive” of Schumer’s effort to pass the legislation by the end of the month, and said speculation that the negotiations might stretch into next year was premature.

She was also upbeat about Biden’s relationship with Manchin, saying their “conversations have always operated in good faith”.

Democrats are looking to pass the Build Back Better plan without Republican support using a Senate procedure called reconciliation, which would allow them to bypass the 60-vote filibuster threshold. But because Democrats control the chamber by the narrowest of margins — 50-50, with vice-president Kamala Harris able to cast the tiebreaking vote — they need the support of all 50 Democratic senators. 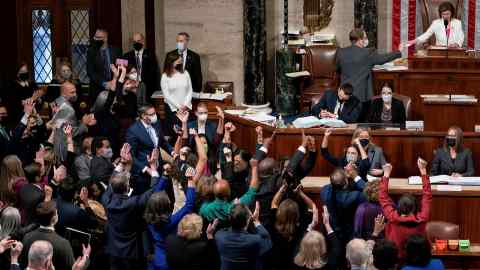 No Republicans have indicated they would back the bill, which the opposition party says amounts to wasteful public spending at a time of soaring consumer prices.

Manchin, the most conservative Democrat in the Senate, has for months raised concerns about the size and scope of the legislation, and has recently tied his objections to rising inflation. The latest official figures last week showed US consumer prices increased at the fastest pace in almost 40 years in November.

The independent, non-partisan Congressional Budget Office produced an analysis of the Build Back Better package last month that said the bill would “result in a net increase in the deficit totalling $367bn over the 2022-31 period”. The CBO projected separate White House proposals to beef up tax enforcement would reduce the deficit by $127bn over the same period.

The White House, however, has pushed back on the CBO’s projections, insisting the bill would be “more than fully paid for” and producing its own more aggressive projections suggesting that Build Back Better would actually reduce the federal deficit by $112.5bn.

Rana Foroohar and Edward Luce discuss the biggest themes at the intersection of money and power in US politics every Monday and Friday. Sign up for the newsletter here