Rivian Or Coinbase: Which Is A Better Buy After Post-IPO Plunges?


It’s been a tough year for investors in Initial Public Offerings (IPOs). Most of the companies that raised money through public markets in 2021 are trading in a bear market after initial spikes in their share prices.

CNBC last week identified 55 tech companies that debuted in the US this year via an IPO, special purpose acquisition company (SPAC), or direct listing. Only one—Globalfoundries (NASDAQ:), which produces semiconductor devices—is less than 20% off its post-IPO high price. Even worse, 23 of those companies have lost half or more of their value since reaching their highs, according to the CNBC report.

Below, we’ve analyzed Rivian Automotive (NASDAQ:) and Coinbase Global (NASDAQ:)—two companies from the hottest segments of the market this year—to understand which stock offers a better entry point after a steep sell-off in each of their share prices.

Shares of Rivian, an electric truck and SUV maker backed by Amazon (NASDAQ:), are down more than 30% from their post-IPO peak which took the stock to a high of $179.40 in mid-November. 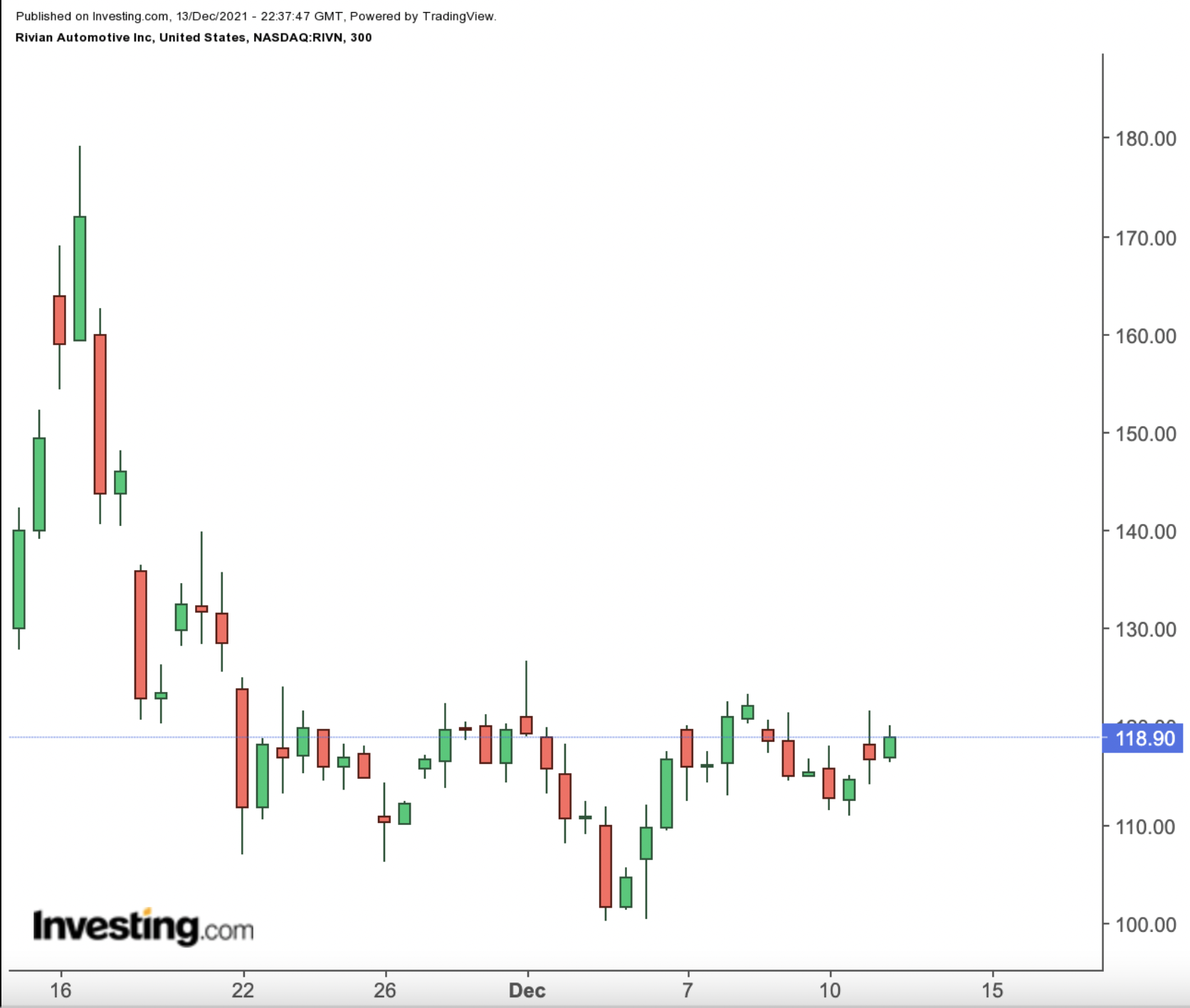 At one point, the post-IPO buying spree made Rivian worth more than almost 90% of S&P 500 companies, including stocks like Boeing (NYSE:), Starbucks (NASDAQ:) and Caterpillar (NYSE:).

That eye-popping rally unraveled quickly, however, after investors realized that the stock was trading at unsustainable levels. Rivian is developing an electric pickup truck and an SUV. It started delivering some trucks in September, mostly to its own employees. It estimates that annual production will hit 150,000 vehicles at its main facility by late 2023.

Though many Wall Street firms have a favorable view on the future of this new EV player, the majority of analysts believe that all the good news is mostly already baked into the price of the stock. The start-up, at yesterday’s closing price per share, has a market cap of $105.97 billion. This puts the company’s valuation at a point higher than legacy automakers Ford (NYSE:) and General Motors (NYSE:).

In a note last week, JPMorgan set a $104-a-share price target for Rivian with a neutral rating. The bank’s analyst said:

“Our neutral rating balances — on the one hand — extremely compelling top-line growth prospects, surprisingly world-class products for a new manufacturer and structural industry tailwinds, with — on the other hand — equally heavy investments anticipated to fund that growth and valuation which is clearly already pricing in a lot.”

Goldman Sachs also assigned Rivian a neutral rating, with a $94 per share price target, saying the company is well positioned in the EV space with good growth potential. Its note added:

“The automotive industry has historically been difficult for new entrants to scale, including in EVs (e.g., Tesla (NASDAQ:) has faced delays on product launches). Rivian is still in the early stages of its ramp, and while the company has a team with industry veterans, the supply-chain environment remains challenging.”

Shares of the cryptocurrency exchange Coinbase show a similar boom-and-bust pattern to that which hit some of the hottest IPOs of 2021. Its stock has been under pressure ever since it began trading on Apr. 14. Currently, it is down about 30% from its early November high. 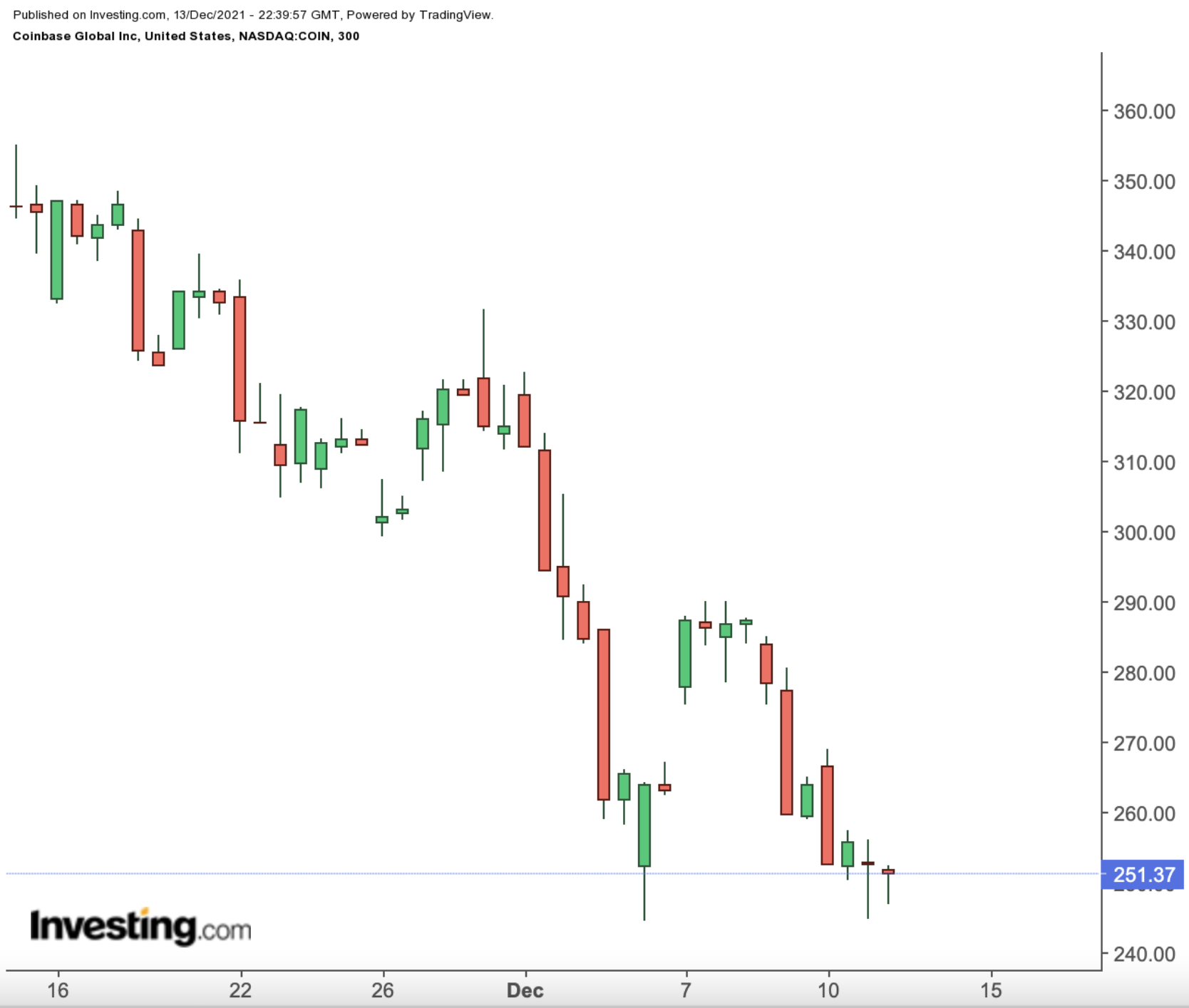 But this bearish spell runs counter to the improving growth prospects for the largest cryptocurrency exchange in the US, and the first major cryptocurrency-focused company to go public. With interest from both individual and institutional investors in the digital coin market spiking, Coinbase is well positioned to benefit.

The latest weakness in its share price started after Coinbase analysts’ forecast for the third-quarter earnings. While the revenue miss has made some investors skeptical about the growth prospects, there are plenty of reasons to believe this could be just a bump amid the increasing global adoption of and other digital assets.

According to JPMorgan analyst Kenneth Worthington:

“We see the crypto markets as durable and growing, and expect Coinbase has the opportunity to influence and benefit from this market growth as it innovates.”

“We see organic and inorganic growth opportunities leveraging Coinbase’s position as a large and trusted exchange with success contingent on hiring the talent needed to develop and acquire ‘the best’ in crypto.”

Both Rivian and Coinbase represent the fast growing segments of the modern economy, offering investors an opportunity to gain exposure to the future growth of each segment.

The latest slump in their share prices indicates their valuations have moved closer to their fundamentals. With that said, long-term investors could consider building gradual positions in either or both.