No matter how old I get, it never ceases to amaze me how much can happen in a year.

Exactly 12 months ago today, inflation was running at only 1.1%, was still under $50 per barrel and was trading at $18,260. Virtually no one had been vaccinated against COVID-19, and even fewer people had ever heard of the word “Omicron” – let alone that it is a letter in the Greek alphabet.

Try to imagine, then, what we’ll be talking about 12 months from now. No one can predict the future, of course; otherwise, we’d all be multi-billionaires.

At the same time, there are a number of key investment themes for 2022 I feel most people would agree on. Below are just a handful.

Inflation Will Stick Around A Little While Longer

Did anyone really think inflation would be “transitory?”

On Friday, the Bureau of Labor Statistics reported that consumer prices rose at their fastest annual pace in about 40 years. The increased 6.8% year-over-year in November, the highest of such a reading since June 1982. Among the biggest contributors to higher inflation were gasoline (up 58.1%), (25.1%), used cars and trucks (31.4%) and clothes (5%).

But as I’ve said before, the official CPI reading could be understating inflation. Prices may very well have increased even more than we’re being led to believe.

By now, you should know what solutions are available to combat inflation’s deleterious impact on your wealth. It’s slightly distressing to look at the following chart, which shows that the total value of deposits in U.S. commercial banks is about to exceed $18 trillion. Inflation is melting away people’s cash faster than the Federal Reserve can print more of it.

As you know, I’ve always recommended a 10% weighting in and gold mining stocks for this very reason. Some readers may rightfully point out, though, that gold is set for a loss this year. As of Friday, it was down about 5.8% year-to-date, which would be the metal’s deepest plunge since 2015.

However, if we step back, we see that gold has been positive for the year far more often than it’s been negative. In several instances, it’s significantly outperformed inflation. In fact, had inflation been at 6.8% every year from 1971 to 2020, gold would have beaten it half of the time. Since 2000, 62% of the time. 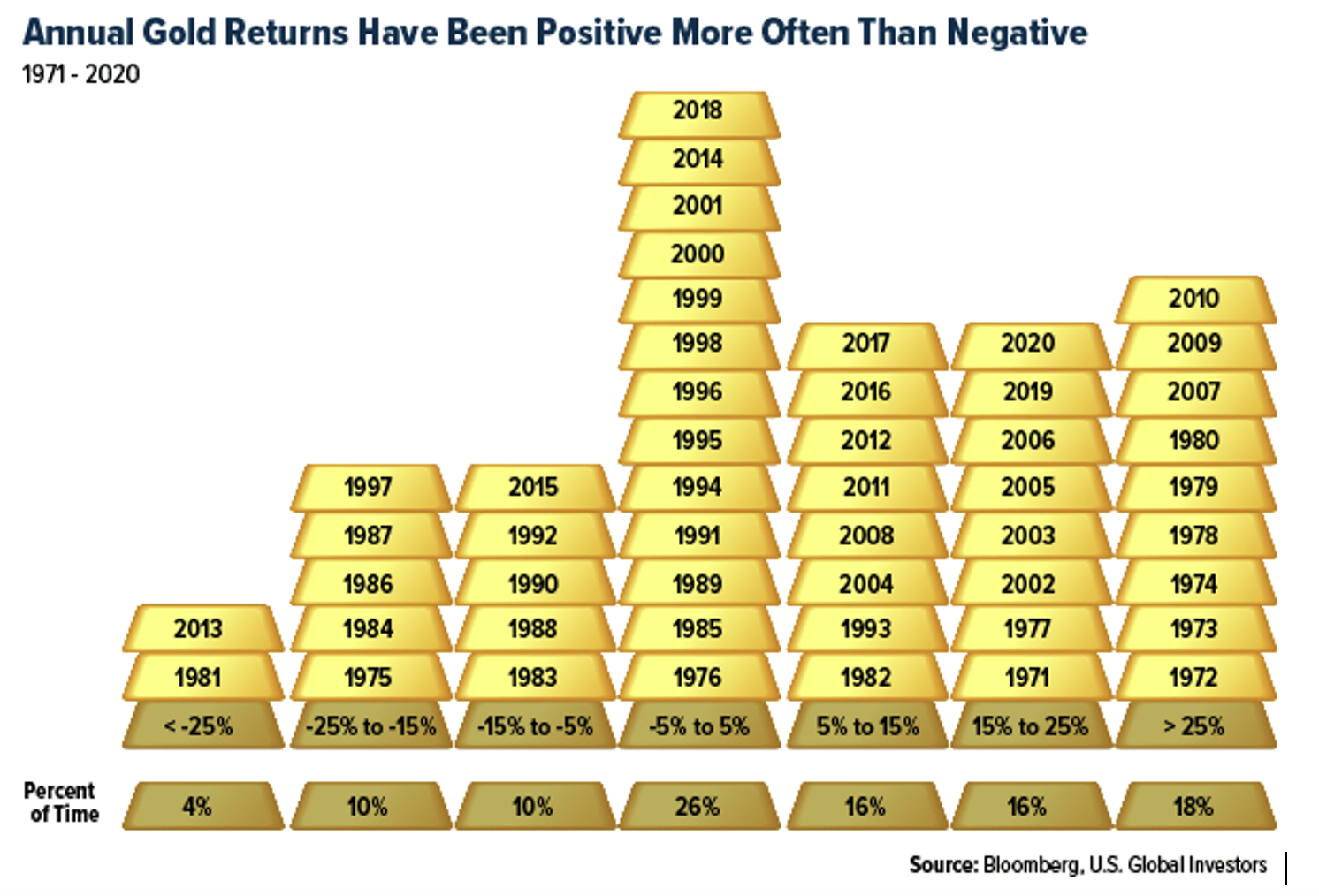 That brings me to , which I also believe is a fabulous hedge against inflation. The cryptocurrency saw an incredible surge in adoption in 2021, and I see the rate accelerating even more in 2022.

A new survey by Grayscale Investments appears to confirm this. More than half (55%) of all current Bitcoin investors said they began participating in just the last 12 months, the firm found. Let’s say another 55% admits to the same at the end of 2022. The compounding effect would be incredibly massive as even more people joined a network for an asset whose supply is capped at 21 million.

As Bloomberg’s Mike McGlone put it in a note to investors last week, “Demand and adoption are rising and still appear in the early days versus supply, which is declining.” The analyst sees $100,000 Bitcoin as “good target resistance,” which I agree with.

Spending On Energy Transition Is About To Blow Up

The transition to net-zero carbon pollution energy has been with us for years now, but 2022 may be a red-letter year for federal spending on renewables, battery technology and more, with huge implications for investors.

Each goal has a different due date. By 2030, 100% of the federal government’s electricity must be generated through carbon pollution-free means (think wind and solar). Five years later, all new vehicle purchases must be of zero-carbon emission cars and trucks. By 2045, all federal buildings must be retrofitted and refurbished.

The U.S. isn’t alone, of course. Germany’s new chancellor, Olaf Scholz, vows to expand spending on renewable energy and phase out coal by 2030. It’s been estimated that for renewables to replace fossil fuels, global investment must triple between now and the end of the decade to around $2.3 trillion per year.

As I’ve said many times before, the opportunities aren’t limited to the companies that manufacture and install wind turbines and solar panels, though we like a few of them, including Canadian Solar (NASDAQ:) and Siemens Gamesa. Remember, these projects will require incredible amounts of strategic metals and minerals, and this should benefit producers and explorers. Our favorites include Ivanhoe Mines (OTC:) (), NanoXplore (graphene) and Standard Lithium (lithium), as well as battery materials and technology companies First Cobalt and Nano One Materials.

A huge contributor to inflation right now is the ongoing supply-chain snarls that were trigged by the pandemic and that have caused all sorts of shipping and logistics delays across the globe. U.S. ports, and those in Los Angeles and Long Beach in particular, are at a disadvantage compared with others because they have not yet embraced robotics and automation. Most ports around the world use automated cranes and trucks, something U.S.-based longshoreman unions have opposed. As a result, it can take twice as long to unload a ship in L.A. as it does in Rotterdam or Shanghai.

This has given container shipping companies a major headache, but it’s also helped fill their coffers. This year, the industry is set to make a collective $150 billion in profits, a new record, according to maritime research firm Drewry. Next year, earnings could be even more, analysts believe, so there could still be time to start participating.

Disclosure: The Consumer Price Index (CPI) measures the average change in prices over time that consumers pay for a basket of goods and services.

All opinions expressed and data provided are subject to change without notice. Some of these opinions may not be appropriate to every investor. By clicking the link(s) above, you will be directed to a third-party website(s). U.S. Global Investors does not endorse all information supplied by this/these website(s) and is not responsible for its/their content.