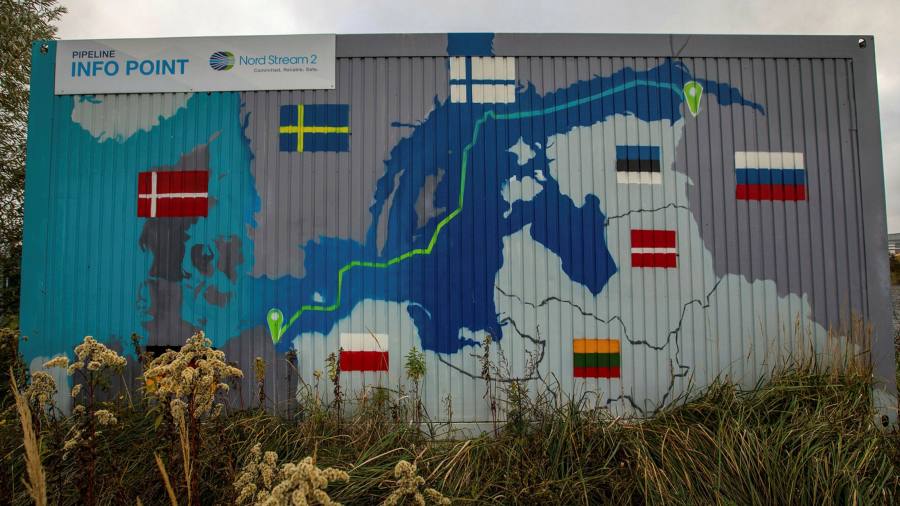 
European gas futures surged 11 per cent on Monday after German foreign minister Annalena Baerbock said the Nord Stream 2 pipeline could not be permitted in its current form because it did not comply with EU law.

Speaking on ZDF TV late on Sunday evening, Baerbock said the three parties that make up the new German government — Social Democrats, Greens and Free Democrats — had agreed that all energy projects, including Nord Stream 2, must be in accordance with EU energy legislation.

“And that means that, as things stand at the moment, this pipeline can’t be approved because it does not fulfil the requirements of European energy law,” she said.

The situation on the Ukrainian border, where Russia has amassed an estimated 100,000 troops, was “also a factor”, Baerbock said. “The last government discussed with the Americans that if there are further escalations this pipeline can’t come on line,” she added.

The pipeline was top of the list when US officials considered potential sanctions that western countries could threaten against Russia.

Baerbock’s comments suggest that Germany’s position on Nord Stream 2 could harden now that the Greens, who have long opposed the project, are in charge of the foreign ministry. However, the Social Democrats, the party of Chancellor Olaf Scholz, have traditionally supported the pipeline.

Nord Stream 2, which is complete but has not yet been permitted to begin operations, will double the capacity of undersea routes from Russia to Europe. US and European critics of the project say it will increase the EU’s dependence on Russian energy exports and allow the Kremlin to put pressure on Ukraine, which will be denied lucrative gas transit fees if the pipeline goes ahead.

European natural gas futures rose to their highest levels since early October. The European gas benchmark for delivery in January jumped as much as 11 per cent on Monday to a high of €117.25 per megawatt-hour, up from €105.35 on Friday and just under the record high of €117.50/MWh in October.

Spells of cold weather and stable but weak flows from Russia to western Europe have resulted in an accelerated drawdown of gas stocks. Across Europe, gas storage facilities are now just 62.8 per cent full, more than 10 per cent below seasonal norms. If the drawdowns continue at current rates, storage levels will reach critically low levels by March/April next year. Analysts say there is no obvious reprieve for Europe’s gas market outside of a mild winter.

Nord Stream 2 can only go into operation once it has been approved by Germany’s regulator, the Bundesnetzagentur, or Federal Network Agency, and the European Commission.

But in mid-November the Bundesnetzagentur suspended the certification process, citing non-compliance with the EU’s gas directive. This has strict rules about “unbundling”, which dictate that companies producing, transporting and distributing gas within the EU must be separate entities. The Bundesnetzagentur said it could only approve the pipeline if the operator was “organised according to German law”. Nord Stream 2 will seek to comply with the requirement by setting up a subsidiary based in Germany that will own and operate the part of the pipeline running across German territory.

Asked on Monday morning why Nord Stream 2 in its current form was non-compliant with EU law, Baerbock pointed to the decision of the Bundesnetzagentur to suspend the certification process, “because there are clear requirements under EU energy law regarding unbundling”.

Nord Stream 2 AG, the operator of the pipeline, and Gazprom, which supplies the gas that will flow through it, both declined to comment.

When asked for his response to Baerbock’s comments, Dmitry Peskov, the Kremlin spokesman, said the pipeline company “is working with the regulator and fulfilling all its demands. We just need to be a bit more patient.”

“This is technical, bureaucratic and legal work. So it’s still going on, let’s not get ahead of ourselves,” he said, according to Interfax.

This article has been updated since original publication to reflect that the European gas benchmark price was for delivery in January, not December

Accused Capitol Rioter Says, ‘I Know We Took It Too Far’