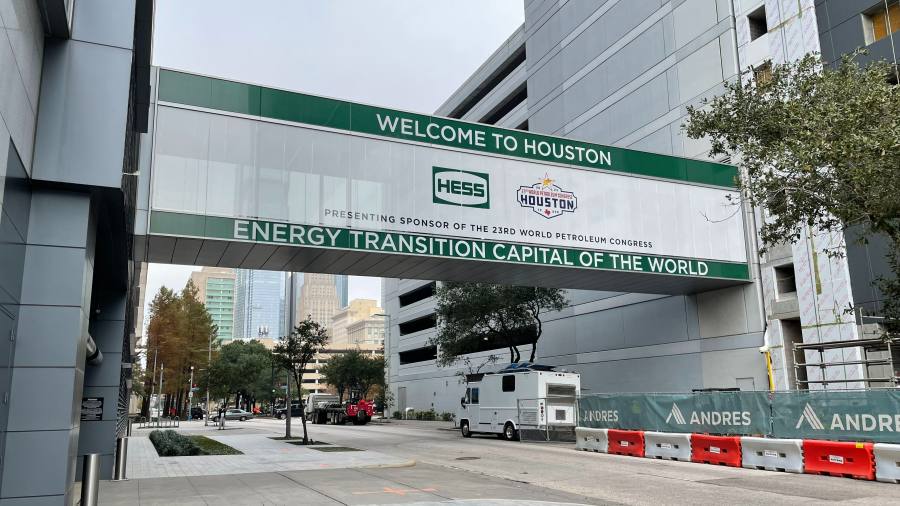 
An oil and gas industry under siege on multiple fronts hunkered down in friendlier environs this week: the World Petroleum Congress in Houston.

There, executives gathered downtown in the George R Brown Convention Center argued that their companies would play a starring role in the transition to cleaner energy and the fossil fuel age was still burning bright. Billboards on roads leading to the event sought to rebrand Houston — traditionally known as the “energy capital of the world” — the “energy transition capital of the world”.

The congress, which bills itself the “Olympics” of the oil sector, was one of the first big gatherings for the industry since the pandemic dramatically disrupted energy demand. After postponing the conference last year, organisers were determined to move forward.

Yet the pandemic was inescapable. Conferees, masked in the main auditorium and largely uncovered elsewhere, were noticeably light on an exhibition floor that is usually a bustling hub of glad-handing and dealmaking. The free canapés were absent. The emergence of the Omicron coronavirus variant caused some headliners, such as BP’s Bernard Looney and Opec secretary-general Mohammed Barkindo, to cancel.

Houston had fought hard to bring the event back to the city for the first time since 1987. Organisers said around 5,000 people showed up; participants said that seemed to be a stretch.

“I didn’t even know it was happening,” said Steven, an Uber driver in the city. “Usually we’re the first to know these kind of things are on.”

Still, the show went on with exhibitions showing off the industry’s latest kit. A Boston Dynamics robot dog, made famous in viral internet videos, fetched rolls of tape. More ominously for future oil demand, an electric race car sat displayed in the centre of the hall.

Also looming over the meeting was the COP26 climate conference in Glasgow last month, where world leaders tried to strengthen plans to move away from a hydrocarbon-based energy system.

Executives did not try to wave off the energy transition, as they have done in years past. Darren Woods, ExxonMobil chief executive, kicked off the conference by calling climate change “one of the most important conversations of our time,” setting a tone that was echoed throughout the speeches and panels.

Rather, the oil bosses aimed to bend the narrative of the energy transition to include a central role for their companies.

The world’s big oil and gas companies have come under intensifying pressure from their shareholders, governments and financiers to adapt to a decarbonising future. Nearly all now acknowledge that their fortunes are tied to the energy transition.

Yet the oil executives rued the fact that they felt they were being left out of the conversation.

“One of the key things that happened at COP is very few — actually I’ll say zero — oil companies were included in any of the official dialogues going on,” said Vicki Hollub, chief executive of US producer Occidental Petroleum.

In a pre-recorded message beamed in from his Vienna office, Opec’s Barkindo said that fossil fuel voices had been “all but excluded” in Glasgow and bemoaned the state of the public discourse on climate.

“At times, the narrative around the energy transition has been overtaken by emotional outburst, with rational discussions based on facts, hard data and science taking the back seat,” he told a receptive crowd.

Executives argued that without their input, the climate conversations at COP26 and elsewhere were becoming dangerously disconnected from the realities of today’s energy system and the pace of decarbonisation they see as possible.

Woods darkly warned of the “unintended consequences” of a rapid shift away from oil and gas, arguing that “the best of intentions poorly executed can do more harm than good.” 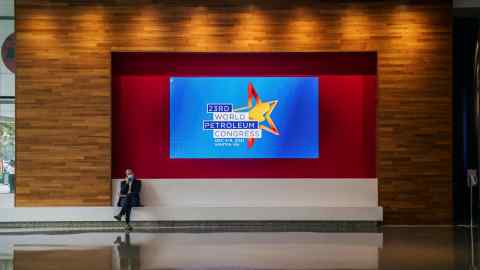 Recent surges in global oil and gas prices were a preview of the decade to come because the world was not investing enough in new supply, setting up a “messy transition,” said Ryan Lance, chief executive of ConocoPhillips.

Mark Little, chief executive at Suncor, a large producer in Canada’s oil sands, was one of many who argued that oil-based products were fundamentally interwoven into the fabric of modern life.

“People don’t realise how useful this commodity is . . . it shows up in asphalt, and you know, nobody is talking about getting rid of roads,” he said.

However, it was Amin Nasser, the chief executive of Saudi Aramco, the world’s largest oil company, who captured the mood in the hall with an impassioned defence. Nasser warned that prematurely abandoning hydrocarbons would send fuel costs soaring and lead to “energy insecurity, rampant inflation and social unrest”.

His advocacy for an industry that sees itself as both indispensable and under siege gave a megaphone to the whispered conversations in the hallways. “He was the only honest one up there. The only one telling the truth how it is,” said one attendee.