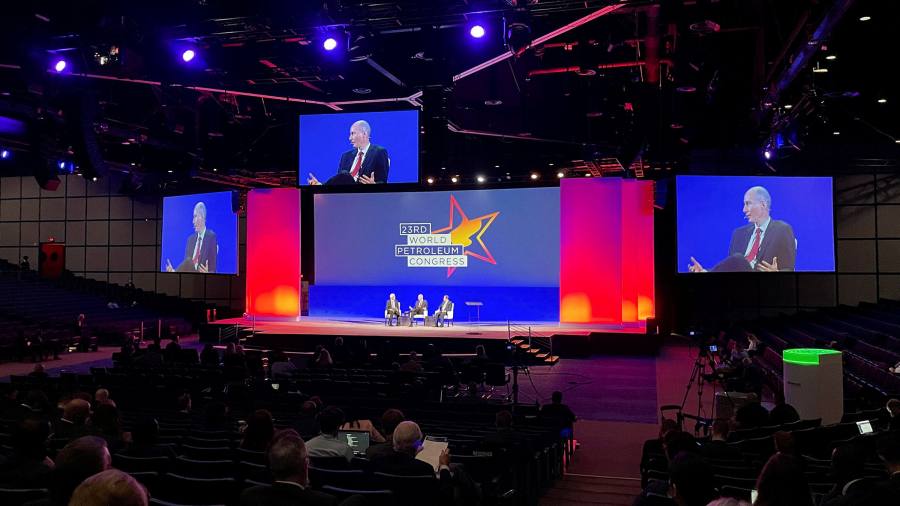 
Fissures between US oil producers and the White House were on full display at an industry gathering in Houston, as executives criticised government officials who have claimed they are not doing enough to boost supply.

The Biden administration, under pressure in the polls from spiralling inflation, has searched for ways to bring down fuel prices and senior officials have begun to question why producers have not raised output.

But at the World Petroleum Congress on Tuesday, some executives said the administration was not serious about its push for more domestic oil, charging that officials were only trying to deflect criticism after turning to Saudi Arabia and others to boost supply.

“Their first response was to call Opec and ask them to pump more oil. They have not called me,” Scott Sheffield, chief executive of Pioneer Natural Resources, a leading shale oil producer, told the Financial Times on the sidelines of the conference. “And we’re the largest Permian producer,” he said, referring to the biggest US oilfield that straddles Texas and New Mexico.

David Turk, deputy secretary of energy, earlier told executives at the event that the Biden administration was “not standing in the way of increasing domestic oil production to meet today’s energy needs”.

Turk, however, said that while the US oil and gas industry’s top 50 publicly traded companies had made $30bn in profits in the second quarter of the year, “production has not recovered accordingly”.

His comments echoed those of Jennifer Granholm, energy secretary, who in recent weeks urged US operators to increase supply while scolding them for their “enormous profits”.

Oil executives in Houston pointed to a different reason for supply that is below previous peaks: investors burnt by years of lossmaking shale companies are demanding they return cash to shareholders in the form of increased dividends and share buybacks, rather than ploughing it into higher output.

“I think [officials] are smart enough to understand the contract we have with our investors — it’s important to give a good return,” Sheffield said. “There’s no way that the industry is going to change overnight and start growing again.”

Executives said the government call to increase output flew in the face of policies the industry argues are at odds with raising domestic oil output. As part of its climate push, the White House scrapped a permit for a big oil pipeline, paused new leases for drilling on federal lands and floated the idea of banning US crude oil exports.

“Oil and gas leadership in fact disqualifies you from being part of the administration,” said John Hess, chief executive of Hess, a big US producer.

US petrol prices have declined modestly in the past month but are up more than $1 a gallon from a year ago. In addition to leaning on producers, the Biden administration has also announced plans to release 50m barrels of crude from the country’s Strategic Petroleum Reserve and sought probes into price fixing by fuel suppliers.

Mike Sommers, chief executive of the American Petroleum Institute, the largest US oil lobby group, said: “I think the logical thing to do would be to reverse some of those policies to incentivise production, rather than to browbeat people into producing more.”