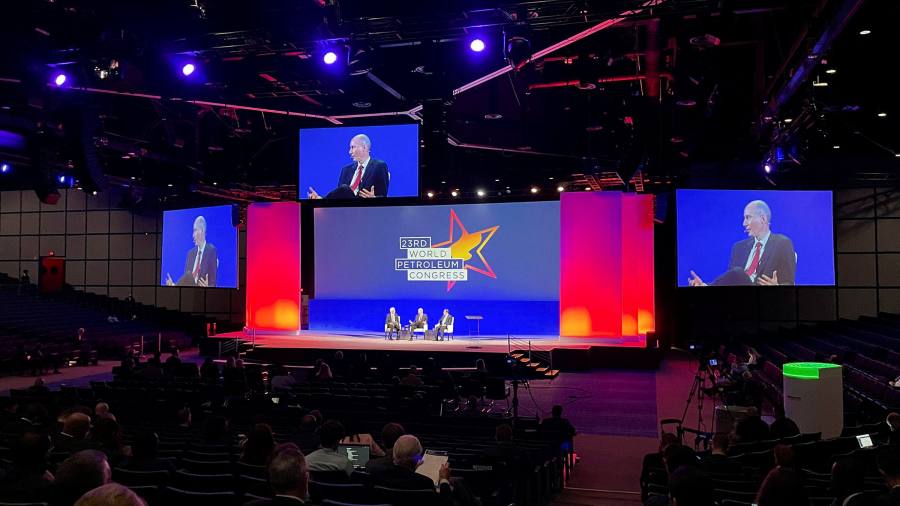 The mixed messages Biden is sending to oil and gas producers


One thing to start:

Today we’re coming to you from Houston. The Energy Source team is in town for the World Petroleum Congress, where Nasser made his comments.

The general sentiment here at the WPC is one of an industry under siege. Big Oil executives have been anxious to show they are doing their bit to help tackle climate change — all the while stressing the enduring importance of their products.

“While a fight to mitigate the risk of climate change is vitally important, so is the work to meet the growing needs of people around the world.”

How to balance these two needs is the theme of today’s Energy Source.

In our first item, Justin Jacobs looks at the stand-off between the Biden administration and the US shale patch over pumping more oil.

Our second item is an op-ed from Morgan Bazilian of the Colorado School of Mines and Jamie Webster of Columbia’s Center on Global Energy Policy on how the White House should pay attention to the nuts and bolts of traditional energy policy even as it pursues its lofty climate goals.

We’ll be bringing you more from Houston on Thursday. If you are in town we’d love to hear from you. Drop us an email at myles.mccormick@ft.com or justin.jacobs@ft.com.

I’ll also be spending a few days in Midland and Odessa after the conference to get a sense of how things are looking on the ground. So for any readers based out in West Texas, please do get in touch.

The Biden administration came to the World Petroleum Congress in Houston this week with a message for the domestic oil and gas industry: step up output to help bring fuel prices down for Americans.

David Turk, the deputy secretary of energy, told the executives that there was a need for “leadership by our domestic producers” to address high fuel prices and the Biden administration “was not standing in the way of increasing domestic oil production.”

The call prompted indignation from many in the audience. The oil and gas industry has been critical of the administration’s oil and gas policies — which have included calling on Opec to step up output before US producers, pausing leasing on federal lands and cancelling the Keystone XL pipeline.

President Joe Biden came into office promising a long-term transition away from fossil fuels and has announced ambitious carbon-cutting targets. But surging prices at the pump this year, the most visible source of inflation for most Americans, have quickly made addressing energy prices a top-tier political issue.

“Our oil and gas sector is seeing a remarkable recovery. The top 50 publicly traded companies earned over $30bn in Q2 of this year,” said Turk. “And yet, production has not recovered accordingly.”

US oil and gas producers are under intense pressure from their shareholders to use that influx of profits from higher energy prices to increase dividends and share buybacks, rather than accelerate output.

The few US producers that have announced their plans for 2022 have indicated they plan to keep a lid on production growth next year, a major reversal from previous years when high oil prices triggered a frenzy of drilling. That expectation has helped prop up global oil prices.

Darren Woods, ExxonMobil’s CEO, said in response that companies were still in recovery mode after the financial devastation of 2020 and were responding cautiously to a still-uncertain economic recovery.

“A big part of what you’re seeing this year is companies rebuilding their balance sheets, to basically make sure that they’re in position for what we know will be continued volatility,” said Woods.

But he added that signalling from governments was important and could hinder investment.

“This is a long time horizon and big dollar investment business,” said Woods. “Every company is going to weigh . . . whether or not they can expect to see a return for the life of their investment. And I think policy positions and positions that government state have an influence on that.”

Joe Biden is the first US president to make climate change a top priority.

Within his first year in office, the topic has been firmly ensconced in rhetoric, executive orders, personnel and regulatory responses — as well as in departments and agencies across the system.

Despite these significant efforts, the administration will also need to apply the same deft handling and attention to navigating the rough waters of a massive set of energy transitions.

Traditional energy issues such as security, relationships with Opec countries, policies for US oil and gas producers and refiners, and prices at the pump will remain key for many years.

Navigating the razor’s edge between industry and the environment within the larger minefield of American politics will be increasingly difficult. On climate the administration is in top form, but in terms of energy, more engagement is needed. There is an ongoing global energy crisis — and it won’t be the last.

Rising gas prices might nudge some higher income populations to buy low-carbon tech like electric vehicles. But for lower income countries and communities, increased costs can drive greater use of coal and oil — and it can also produce a backlash, potentially slowing climate efforts to date.

While the US has largely been shielded from the worst of the energy crisis so far, the average petrol price in the country, the world’s largest producer of oil and gas, was recently at around $3.50 per gallon. That’s the highest in the last eight years.

Despite many recent polls showing voters care a great deal for the climate and environment — the cost of filling up their cars and heating their homes remain the real priorities.

After a series of overtures to Opec, and an ongoing period of muddled messaging, the Biden administration banded together with five other countries to announce a release of crude oil from the Strategic Petroleum Reserve — and without the typical International Energy Agency co-ordination.

Releasing these barrels in partnership with countries like China is unprecedented, and perhaps shows the beginning of a new energy statecraft. Still, the actions thus far, including murmurings of banning crude exports, appear more peripatetic than the result of an elegant strategic intent.

The government should consider more engagement with US producers on low-emission differentiated products and switching some of the focus from supply issues to demand-side measures.

Policy “attention”, and the associated personnel and budgets, cannot be doled out evenly. Governments, like people and businesses, have to make choices.

The Biden administration has prioritised the climate. The timing is good for such a push, but as a result, the diplomatic focus on energy security has waned.

That has been highlighted in the lacklustre approaches to energy diplomacy, the public communications on the issue, and high-level political appointments.

Biden’s well-intentioned climate goals require paying attention to the nuts and bolts of conventional energy policy and closely minding the pace of change­. That means keeping legacy fuels flowing for the time being, and at affordable prices.

“If you have built castles in the air, your work need not be lost; that is where they should be. Now put foundations under them.”

This advice should be heeded in terms of marrying long-term aspirations with the ongoing realities of the real economy.

Soaring natural gas prices helped revitalise coal demand in the third quarter as power producers switch back (at least for now) to the dirtier fossil fuel. An analysis by S&P Global Market Intelligence found coal production is up 9 per cent from the same period last year.

The latest surge in coal usage did not carry over to the labour market, however. While the average number of US coal employees rose 2.5 per cent from last quarter, employment is still down 3.2 per cent year-over-year, according to S&P.

Despite the recent uptick, US coal production and jobs are nowhere near levels a few years ago. Both metrics have fallen roughly 40 per cent since 2015, according to S&P. The research firm expects coal demand to return to its downward trend as natural gas prices fall in the next year. (Amanda Chu)