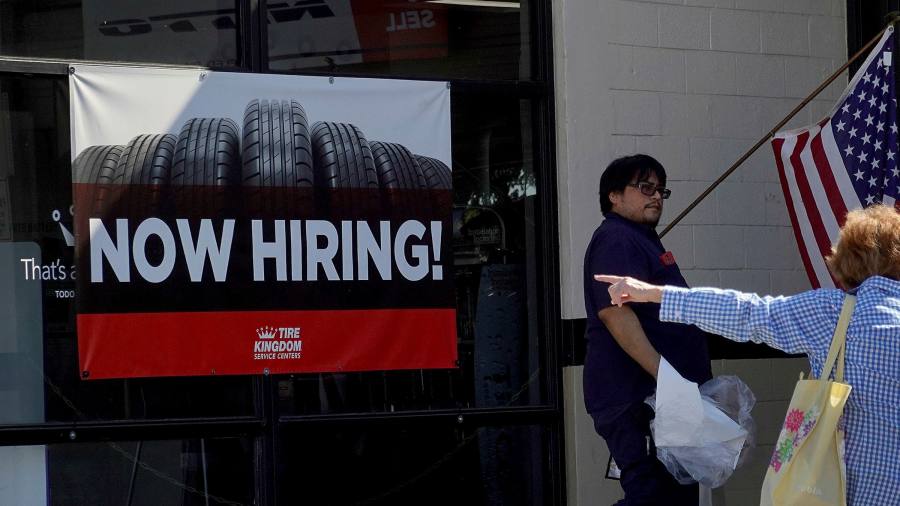 Shares in the technology-focused Nasdaq Composite fell 1 per cent in early dealings, with electric vehicle company Tesla and fitness technology group Peloton both sliding more than 5 per cent.

The moves came after investors last Friday retreated from shares in highly valued US tech companies, which have been sensitive to sudden shifts in market sentiment. The Nasdaq 100, a gauge of the largest and most actively traded stocks on the Nasdaq Composite, ended last week almost 2 per cent lower.

The broad-based S&P 500 share index was up 0.2 per cent in early US dealings on Monday.

Tech stocks, which during the pandemic era have been boosted by coronavirus restrictions, may no longer receive such support, said Trevor Greetham, head of multi-asset at Royal London. “This is now a hugely expensive sector, just very overvalued.”

US jobs data released on Friday showed US employers added 210,000 workers last month, fewer than half the number economists polled by Reuters had expected, but also a significant fall in the unemployment rate to 4.2 per cent.

That came days after Jay Powell, Federal Reserve chair, signalled his support for rapidly reducing the central bank’s $120bn monthly bond purchases that have lowered borrowing costs and boosted equities during the pandemic. US consumer prices rose at their highest annual rate for 30 years in October.

The Fed’s purchases, while not directly responsible for flows into speculative tech stocks and cryptocurrencies, had created a “sense of confidence”, and “a feeling that you’ll never lose money”, said Hani Redha, multi-asset portfolio manager at PineBridge Investments.

“Normalisation of monetary policy is a headwind for markets,” he added. “The areas that are most speculative and least driven by fundamentals are the most vulnerable.”

The yield on the benchmark 10-year Treasury rose about 0.04 percentage points to 1.38 per cent as the price of the debt fell. This key debt yield traded at above 1.65 per cent in late November, before the World Health Organization declared Omicron a variant of concern.

On Sunday, top US health official Anthony Fauci called early signals about the severity of Omicron “encouraging”, telling CNN “we feel certain that there will be some degree and maybe a considerable degree of protection” with booster jabs.

Investors expect markets to swing on fresh headlines about Omicron while scientists await conclusive data about the variant.

“It has also not been a good time for the Fed to talk about speeding up monetary tightening,” Greetham said. “Central banks should step back and wait to see what happens with the variant.”

Europe’s Stoxx 600 share index gained 0.9 per cent. London’s FTSE 100, which has heavy weightings of commodities producers and miners, rose about 1.2 per cent as traders focused on stocks that benefit when oil prices price.

Brent crude advanced 2.7 per cent to $71.77 a barrel. The oil benchmark fell about 16 per cent in November, weighed down by concerns about Omicron and producer group Opec + increasing supply.

Meanwhile, the FT Wilshire blended bitcoin price gauge, which collates data from several exchanges, fell as low as $42,222 on Saturday, from Friday’s closing level above $53,000. It traded at $48,437 on Monday.