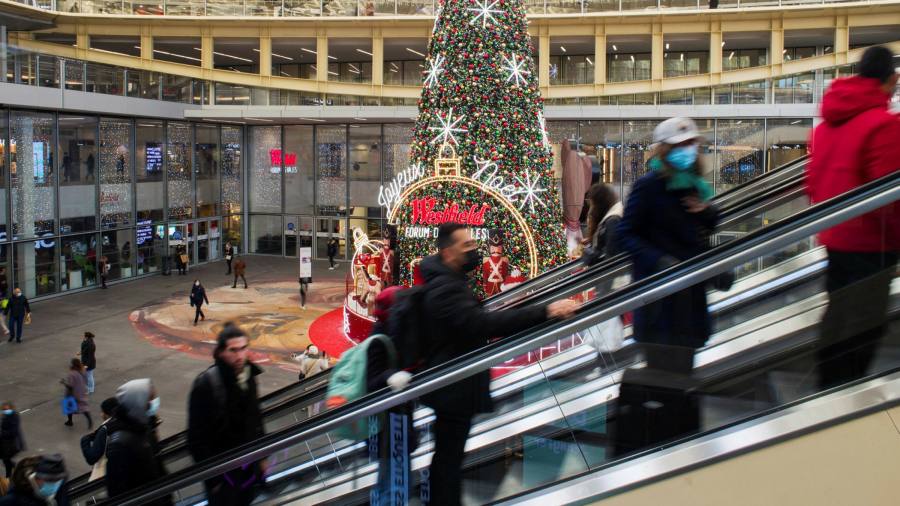 
Inflation in the eurozone rose to 4.9 per cent in November, a record high since the single currency was created more than two decades ago, prompting policymakers and economists to warn that price pressures are likely to persist for longer than expected.

Driven by soaring energy prices, the increase in eurozone inflation — as measured by the harmonised index of consumer prices — outstripped the 4.5 per cent expected on average by economists polled by Reuters. The rise is likely to put more pressure on the European Central Bank to reduce its monetary stimulus.

Some investors said the ECB seemed too relaxed about rising prices. “It may be wishful thinking on the part of ECB president [Christine] Lagarde when she declares that price pressures won’t run out of control — they already are and it’s difficult to follow the argument that it will abate soon,” said Charles Hepworth, investment director at GAM Investments.

Jens Weidmann, the outgoing president of the Bundesbank, on Tuesday warned the ECB to be “wary of any pressure to maintain its very loose course longer than the price outlook dictates”.

The German central banker’s comments came as a 6 per cent rise in German consumer prices, the fastest increase for almost 30 years, is causing political unease. Germany’s incoming finance minister Christian Lindner wrote on Twitter that “inflation gives rise to legitimate concerns”, adding: “In the case of currency devaluation, we’ll observe how it develops after the pandemic.”

The ECB has tried to calm anxiety about rising prices by saying many one-off causes of inflation such as surging energy prices, supply chain bottlenecks and the reversal of a German sales tax cut will fade next year.

While a surge in coronavirus cases and the spread of a new variant are causing more uncertainty over the economy, there are signs that ECB officials doubt whether inflation will fall as fast as they thought.

“In 2022, bottlenecks may last longer than expected,” Luis de Guindos, vice-president of the ECB, said in an interview with Les Echos published on Tuesday. “There’s a risk that inflation will not go down as quickly and as much as we predicted.”

A 27.4 per cent rise in energy prices in November from a year earlier was the biggest driver of inflation in the bloc’s 19 countries. But the prices of food, services and goods all rose faster than the ECB’s 2 per cent target.

Core inflation, which the ECB monitors for underlying pressures because it strips out more volatile energy, food, alcohol and tobacco prices, climbed to 2.6 per cent, up from 2 per cent a month earlier. Some of the increase in services prices was due to a lower weighting of package holidays in the official inflation basket to reflect the drop in tourism during the pandemic.

Luigi Speranza, chief global economist at BNP Paribas, said: “It is quite difficult to ignore figures like those we see today, so there will be growing demands for compensation in higher wages for workers.”

Economists are struggling to assess the impact on inflation of a record surge in coronavirus cases and the spread of the Omicron variant in Europe.

Jack Allen-Reynolds, senior Europe economist at Capital Economics, said the variant was likely to reduce overall inflation due to lower oil prices but could push up goods prices by adding to supply chain logjams created by the pandemic. He predicted eurozone inflation would only fall below the ECB’s 2 per cent target in late 2022.

The ECB will issue new inflation forecasts on December 16 and is widely expected to increase them from those issued in September, when it predicted a fall from 2.2 per cent this year to 1.7 per cent next year and 1.5 per cent in 2023.

Chart Of The Day: The NASDAQ 100 Could Be About To Top Out