The Wendy’s (NASDAQ:) Company WEN has been focused on expanding its presence globally. In sync with the endeavor, the company is planning to open 50 restaurants in the U.K. throughout 2022 following a successful relaunch in the country this year.

Wendy’s managing director for the U.K. and Canada, Paul Hilder, said “We’re in the final stages of discussions with two traditional franchise partners who will help the brand cross the Midlands and the North of England, and we have a very strong pipeline of franchise candidates beyond that.”

Shares of the company have gained 0.6% in the past year, compared with the industry’s growth of 14.6%. 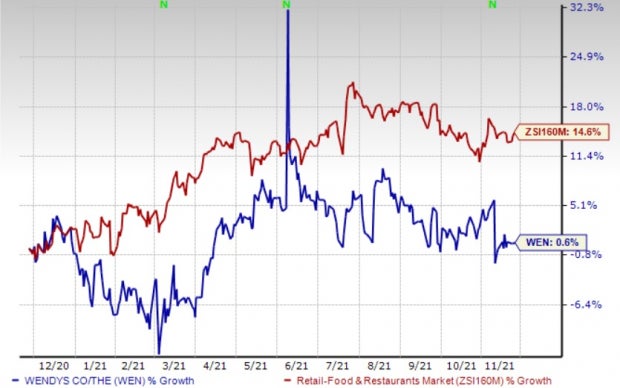 Expansion to Act as a Key Catalyst

Backed by a strong pipeline of locations and a talent team in place, the company is optimistic regarding prospects in the international markets. Despite the pandemic, the company opened approximately 150 restaurants in 2020. In third-quarter fiscal 2021, Wendy’s had 48 global restaurant openings with an increase of 25 net new units.

During the fiscal second quarter, the Zacks Rank #3 (Hold) company announced a development commitment by REEF to open and operate 700 delivery kitchens (over the next five years) across the United States, Canada and the U.K. The commitment builds upon the successful test of eight delivery kitchens in Canada (beginning in late 2020). With this agreement, REEF will become the first Wendy’s franchisee in the U.K. The company together with REEF expects to inaugurate approximately 50 delivery kitchens in 2021, with the rest expected to be launched by 2025. WEN also announced 240 incremental new restaurant commitments in Canada and the United States through its Groundbreaker Incentive Program. Notably, commitments from REEF and Groundbreaker Incentive Program represent 70% of its new global restaurant pipeline through 2025.

Dave & Buster’s Entertainment, Inc. PLAY, which has been benefiting from reopening initiatives, ramped up vaccinations and excellent operational execution, sports a Zacks Rank #1 (Strong Buy). The company anticipates sustaining the momentum in the days ahead, backed by its strategic initiatives that include new menu, optimized marketing and technology investments.

Dave & Buster’s has reported better-than-expected earnings in each of the trailing four quarters, the average surprise being 201.8%. The company’s fiscal 2021 earnings is likely to witness growth of 147.7%. PLAY stock has gained 36.4% in the past year. You can see the complete list of today’s Zacks #1 Rank stocks here.

Kura Sushi USA (NASDAQ:), Inc. KRUS carries a Zacks Rank #2 (Buy). The company has a trailing four-quarter earnings surprise of 15.6%, on average. Shares of the company have surged 57.1% in the past six months.

The Zacks Consensus Estimate for Kura Sushi’s current financial year sales and earnings per share suggests growth of 108% and 85.7%, respectively, from the year-ago period.

Del Taco Restaurants (NASDAQ:), Inc. TACO has a Zacks Rank #2. The company has a trailing four-quarter earnings surprise of 25.7%, on average. Shares of the company have declined 7.8% in the past three months.

The Zacks Consensus Estimate for Del Taco Restaurants’ current financial year sales and earnings per share suggests improvement of 7.2% and 33.3%, respectively, from the year-ago period.

Blockchain and cryptocurrency has sparked one of the most exciting discussion topics of a generation. Some call it the “Internet of Money” and predict it could change the way money works forever. If true, it could do to banks what Netflix (NASDAQ:) did to Blockbuster and Amazon (NASDAQ:) did to Sears. Experts agree we’re still in the early stages of this technology, and as it grows, it will create several investing opportunities.

Zacks’ has just revealed 3 companies that can help investors capitalize on the explosive profit potential of Bitcoin and the other cryptocurrencies with significantly less volatility than buying them directly.

Want the latest recommendations from Zacks Investment Research? Today, you can download 7 Best Stocks for the Next 30 Days. Click to get this free report