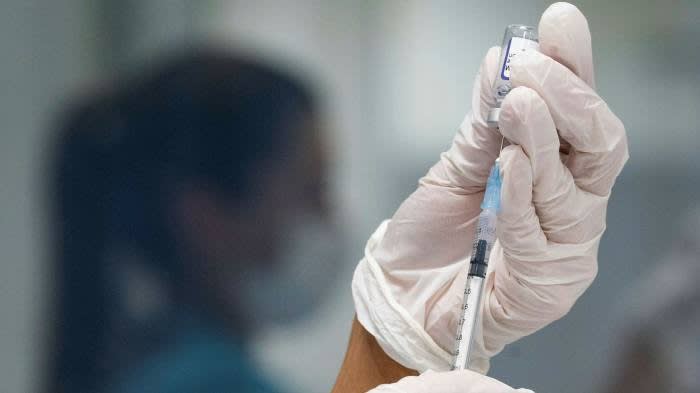 Good morning. I hope you had a good Thanksgiving. As you will have noticed, we took the day off to mark this holiday, but are glad to be back with you today.

The B.1.1.529 Sars-Cov-2 variant, first identified in Botswana, is believed to be behind a surge in Covid cases in southern Africa over the past week and has alarmed global health officials because of its apparent ability to evade vaccines and spread more quickly than the Delta variant.

“Things have escalated on the Covid front quite rapidly over the last 12 hours,” said Jim Reid, a strategist at Deutsche Bank. Yesterday, the new variant “was slowly starting to gather increasing attention but overnight it has begun to dominate markets”, he said.

Thank you for reading FirstFT Americas. Here is the rest of today’s news — Zehra

1. Countries ban travellers from southern Africa over Covid variant The EU and UK moved to impose travel restrictions on a group of southern African nations as a surge in cases of a heavily mutated coronavirus variant caused alarm among global health officials.

2. US commission calls for tighter controls on flows to Chinese markets The latest annual report from the US-China Economic Security Review Commission highlighted security concerns from a huge rise in US investment.

3. France cancels UK invitation to migrant crisis talks France has withdrawn an invitation to the UK home secretary to join talks on the migrant crisis following a public letter from Prime Minister Boris Johnson to President Macron. The letter called for French and British reciprocal maritime patrols in each other’s territorial waters and for the thousands of migrants who reach English shores to be returned to France.

Black Friday Thanksgiving is followed by the consumer frenzy, now an international event, providing a reading of the health of the retail sector. US consumers are expected to spend between $5.1bn and $5.4bn online on Thanksgiving Day, a record for the day, Adobe Analytics said on Thursday.

WHO emergency meeting over variant The World Health Organization will discuss the new coronavirus variant, first identified in South Africa and Botswana, that is believed to be spreading faster than thought.

Economic indicators Huw Pill, the Bank of England’s chief economist, is due to deliver a speech on the UK’s economic outlook. France will release consumer confidence data and Switzerland will release third-quarter gross domestic product figures.

Amazon workers’ Black Friday strike On one of the company’s busiest days of the year, Amazon workers in 20 countries — including the US, UK, and several in the EU — are planning protests and work stoppages. (BBC)

Abortion and the American divide The Supreme Court decided this summer not to block a Texas law that offers private citizens a bounty to bring lawsuits against anyone who helps with an abortion after a “foetal heartbeat” can be detected. Katie Roiphe asks, how did it come to this?

What the ‘big quit’ tells us about inflation The pandemic has seen even more people decide that the labour market is not for them. But if resignation rates tell a clear story, the message from overall labour market participation is much more subtle, writes Chris Giles.

Honduras on edge ahead of presidential election Hondurans will go to the polls on Sunday. At stake is the stability of a country plagued by corruption, drug trafficking and one of the world’s highest murder rates.

The logical case for employing reverse logic What problems could we fix by doing the exact opposite of what one might expect? Here’s a thought: environmentalists should fight climate change by buying coal mines, then shutting them down. Tim Harford takes a look at other reversals of logic.

Yes, there is a third way on ‘wokeness’ Liberals should aim to marginalise the whole debate on “wokeness”, writes Simon Kuper. It should not be the culture war of our time.

From politics, economics and history to art, food and, of course, fiction — FT writers and critics pick their favourite reads in our annual round-up of publishing highlights. You can browse their choices here.

Is This A Fake Move In U.S. Markets?