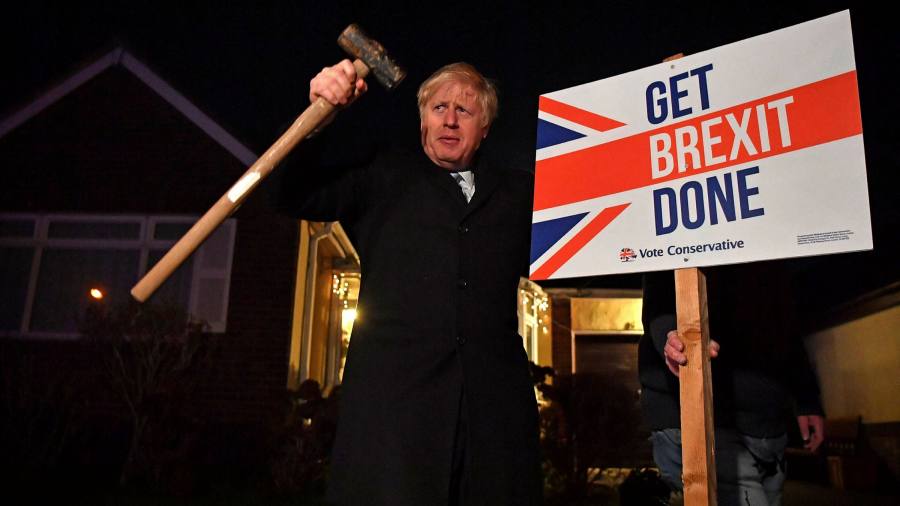 David Frost in bullish mood despite shortage of post-Brexit momentum

The slogan ‘Get Brexit Done’ was a powerful vote-winner in 2019 because it promised closure to the public after three long years of acrimonious and exhausting national feuding.

Those three words — and the related promise to ‘Unleash Britain’s Potential’ — were on the front cover of the Tory party manifesto, featuring a picture of Boris Johnson giving the nation a thumbs up. The message was clear: time to move onwards and upwards.

But this week, as we approach the end of the first year of the UK’s life outside the EU single market, it has been hard to find much sense of the post-Brexit momentum that was promised two years ago.

The Northern Ireland situation has come off the boil, but based on this week’s headlines is likely to remain a source of simmering tensions well into next year.

The trade secretary Anne-Marie Trevelyan said it was “absolutely not” the government’s intention to trigger Article 16 before Christmas, and Maros Sefcovic, the EU’s Brexit negotiator, wearily confirmed talks are now likely to drag on into 2022.

This is clearly better than a full-blown bust up, but as Lord David Frost has frequently himself said, resolving the disagreements over Northern Ireland is a necessary precursor to normalising relations with the EU. That still feels a long way off.

And if proof were needed of the extent to which the Northern Ireland Protocol has infected EU-UK relations, it was evidenced by Germany’s new government coalition agreement specifically referencing the need to ensure “full compliance” from the UK with agreements it had signed.

But there was also a much longer-term warning from Frost about the government’s determination not to dilute its Brexit vision. This is despite pressure from companies facing the problems caused by erecting high levels of non-tariff barriers with the advanced economy trading bloc on Britain’s doorstep.

The barriers are high. The talk of a ‘zero tariff, zero quota’ free trade agreement may have conjured the notion of ‘free-flowing’ trade, but the reality (as this excellent and readable paper by Catherine Barnard and Emilija Leinarte of Cambridge university law faculty explains) is much closer to “WTO rules” or “no deal” than was popularly understood.

As they observe, the Trade and Cooperation Agreement (TCA) is spectacularly unambitious. It contains almost nothing on services, mutual recognition of each others’ standards, mobility provisions for young people and skilled workers, or an agreement on agrifood products that create a fair proportion of headaches at the border.

“The result is that the TCA offers little more in terms of eliminating technical barriers to trade than the parties would have been subject to under the WTO rules in case of a ‘no deal’ situation,” they write.

This always was a big step for any government to take — the Office for Budget Responsibility continues to forecast that Brexit will cause a 4 per cent long-term hit to UK gross domestic product (twice that of the pandemic) — but forecasts are only forecasts, so in the meantime the government will continue to conjure a more optimistic vision for the future.

In his speech to the Margaret Thatcher Conference on Trade this week Frost insisted the UK was right to reject a softer version of Brexit that left the UK “more closely in the EU’s orbit”. He then appeared to squash hopes some in the business world harbour that a resolution in Northern Ireland could kick start a process of addressing some of the deficiencies in the UK Trade and Cooperation Agreement.

“As far as I can tell, many people . . . would like to inch us back to that situation over time. That can’t be right,” he said.

So there will be no backsliding on Brexit. Instead Frost promised to focus on domestic innovation, a more enabling regulatory environment, and forging global trade deals while also, in his own words, overcoming “the forces of entropy, of laziness, of vested interest”.

Recalling Margaret Thatcher’s vision of “a do-it-yourself nation, a get-up-and-go Britain”, Frost said the UK appeared to have lost that spirit during the days of EU membership. But, he said: “Brexit is bringing it back”.

This is a seductive narrative for Brexiters. It was one, interestingly, that Johnson reverted to during his infamous ‘Peppa Pig’ speech to the CBI which opened with a paean of praise to the “kitchen appliance and hairdryer makers” who were asked to try to reinvent medical ventilators in the “dark days” of the pandemic. And yet in reality, the scheme was far better at delivering quick headlines than it was ventilators.

At ground level, the regulatory autonomy and can-do spirit that Frost and Johnson extol in their speeches gets a much more mixed reception from business, as previous editions of Britain after Brexit have explored, from chemical manufacturers to medical device makers.

This week it was the building industry (key to delivering the net zero and levelling-up agendas) which wrote to warn the government over the consequences of its plans to introduce the UKCA quality mark to duplicate the EU’s CE mark.

As Peter Caplehorn, chief executive of the Construction Products Association, said, lack of UK bodies able to test for the UK standards (in windows, glass, sealants etc) meant that companies were spending millions in the short term but in the long term “our concern is UKCA will stifle innovation, reduce product ranges and [put] upward pressure on costs over time”.

The drinks industry also wrote in to warn that labour and truck driver shortages, driven in part by Brexit, were pushing up delivery times fivefold from three to 15 days, and urged the government to extend its Christmas visa scheme to allow in more lorry drivers.

Perhaps in the mind of the government these complaints — usually batted away as a necessary part of “taking back control” — are simply those of “vested interests”, or too granular to bother with.

But for businesses on the ground, particularly small businesses with tight margins and limited personnel, the ‘can-do spirit’ that Frost says Brexit is revitalising, is having to expend a lot of its energy battling supply-side headwinds that are, at the very least, not helped by a decision to erect maximum barriers with the EU.

It is to be expected that politicians campaign on vision rather than reality, but come the next general election Boris Johnson (or whomever) will still need voters to feel that this government did indeed work to “Unleash Britain’s Potential”, rather than stifle it.

The Johnson government — and Frost again in his speech to the Thatcher conference — has consistently pointed to the value of recovering control over international trade policy as a key benefit of Brexit.

This is the case despite the fact that, as was pointed out at an international trade select committee hearing this week, the long term upsides to UK GDP of doing trade deals are tiny. In the case of New Zealand and Australia estimates come in at around 0.01 or 0.02 per cent by the government’s own estimates.

Those gains clearly do little to offset the negative hit from erecting such substantial trade barriers with Europe — even if the OBR forecast of a long-run hit of 4 per cent turns out to be overstated.

One way of trying to screen out the effects of Covid-19 and other factors is to measure UK trade against a ‘doppelgänger’ UK that had not exited the EU, built around modelling the trade performance of other advanced economies such as the US, Germany, Greece, New Zealand and Sweden.

This is what has generated the above chart from John Springford at the Centre for European Reform (CER) whose work was referenced by the OBR in its October update.

Here he shares the latest iteration of the model for Britain after Brexit readers. It found that in September 2021, leaving the EU’s single market and customs union had reduced goods trade between the UK and the world by £8.5bn or 11.2 per cent.

Monthly trade data is quite volatile, but since May 2021 the model has shown a hit to UK trade of between 11 and 16 per cent, which is similar to pre-Brexit forecasts from the OBR and the Theresa May government.

Springford says that translating that ‘hit’ to trade into precise estimates of impact on GDP per capita (a key measure of living standards) is an imprecise science. The forecasts range from 2 to 9 per cent reduction in GDP compared to a UK that stayed in the EU.

Before the pandemic, the CER estimated that the effects of depreciation of sterling and foregone consumption and investment had reduced GDP by 1 to 3 per cent. Add the effect of reduced trade after a single market exit on top of that figure and, Springford says, there is “good reason to fear” that the OBR estimate of a 4-5 per cent smaller economy is “about right”.

Until now, these economic consequences have been largely met with a shrug by voters who were indeed relieved to have “got Brexit done” and then been consumed by dealing with the pandemic. It is also true that since no one lives in Springford’s “doppelgänger” UK most people don’t miss the economy they could, theoretically, have enjoyed.

Regardless of whether anyone connects economic issues with Brexit, Springford reckons that a 4-5 per cent is “a big deal” that has already hit tax revenues, causing chancellor Rishi Sunak to raise taxes more than he otherwise would.

Whether or not voters attribute weaker economic performance to Brexit policy, the risk for this government is that a prolonged squeeze on living standards (driven in part by its choices on Brexit) will ultimately land at the PM’s door.

Do you work in an industry that has been affected by the UK’s departure from the EU single market and customs union? If so, how is the change hurting — or even benefiting — you and your business? Please keep your feedback coming to brexitbrief@ft.com.

Brexit may not seem to have caused the City of London a serious injury, but, Helen Thomas argues, it has led to a slow bleed. While early predictions of hundreds of thousands of job losses have proved overblown, change is happening, she says. And there are worrying times ahead.

Whatever happened to Michel Barnier? In his latest column, Gideon Rachman investigates why the former EU commissioner has had a curious change of direction Barnier is now running for the presidency of France, but what does his story tell us about European politics?

As you will have seen above, this week I wrote about how the UK construction industry has warned that a new post-Brexit UKCA safety and quality mark could cause shortages of key building products and materials, as well as damage the government’s levelling up agenda. Find out more about their concerns, and the letter they wrote to business secretary Kwasi Kwarteng.

Germany has a new government and Valentina Pop, editor of our Europe Express newsletter, has been delving into the new 178-page German coalition agreement. She explains why it’s more evolution than revolution. You can sign up for Europe Express here.

What Happens To My Shares In A Stock Split?