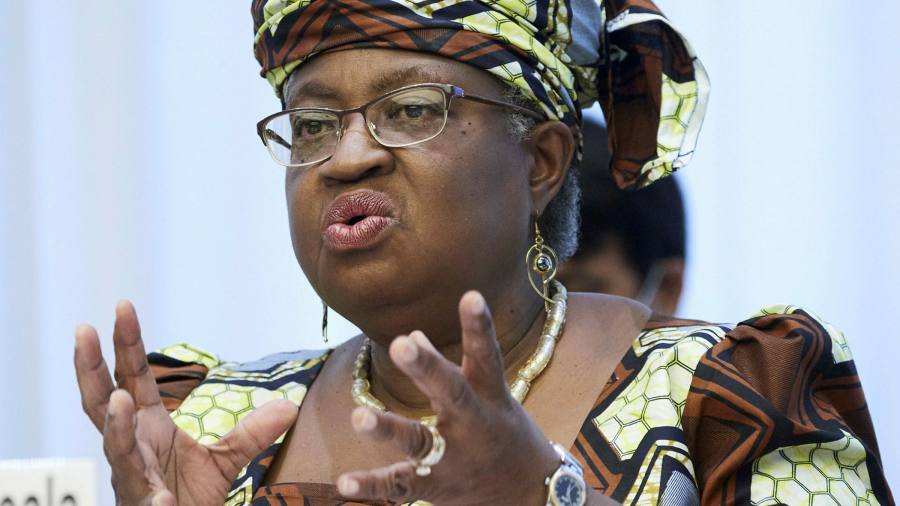 
The World Trade Organization’s head has warned that highly-charged talks on an intellectual property waiver for Covid vaccines are “stuck” and need governments to compromise at the WTO’s main ministerial meeting next week.

Ngozi Okonjo-Iweala told reporters on Thursday: “If we take an all-or-nothing attitude, then it means potentially we all walk away with nothing.”

More progress was likely on other issues including a deal to reduce fisheries subsidies, work on using trade to combat Covid and launching a discussion on reforming the WTO itself, she said.

Last year India and South Africa made a sweeping proposal to waive IP protections including patents, copyright and trade secrets on all medical goods used to treat Covid, particularly vaccines. Rich-country governments including the EU, UK and Switzerland have opposed such a broad move, while the US has supported a waiver in principle without giving any details of what deal it might accept.

The EU last week made a fresh suggestion to make it easier for governments to override vaccine patents, but trade officials agree it is highly unlikely to bridge the huge gap with the Indian and South African position.

“We’ve been stuck on the formal track,” Okonjo-Iweala said. “We’ve tried many things informally to get negotiations going. At one point that seemed to be going pretty well. But again, that got stuck.”

Okonjo-Iweala recently visited India to discuss Delhi’s concerns over several WTO issues including fisheries, which will also be discussed next week. India is demanding broad exemptions from restrictions on fishing subsidies.

She said that while the talks with Narendra Modi, India’s prime minister, had been useful, she could not claim to have made a breakthrough.

Officials from the WTO’s 164 member governments meet in Geneva next week for the regular ministerial meeting, which is usually held every two years. The meeting has already been postponed from last year and its location shifted from Kazakhstan to Switzerland because of the Covid pandemic.

Although ministers will be able to attend in person, the size of delegations has been limited to minimise the chance of a Covid outbreak, limiting the possibility for the usual intense negotiations that have produced agreements in the past.

Okonjo-Iweala, a former Nigerian finance minister and World Bank number two, became WTO director-general in March. She has impressed ambassadors and ministers with her energetic advocacy, including for more co-ordination on vaccine production and distribution.

On Thursday she said that her initiative of convening meetings of pharmaceutical companies, health experts, governments and activists had helped the global response to Covid. “The WTO’s work is not just defined by the IP waiver,” she said. ‘If you get the waiver but you don’t have manufacturing capacity, you can’t use it. If you have manufacturing capacity but no technology transfer, you can’t use it.”

The Biden administration, although it has sounded more positive about the WTO than Donald Trump’s officials, has continued to hamstring the institution’s dispute settlement process by refusing to name new appointees to its appellate body. That and other WTO reform issues will be pushed off to the next ministerial after the upcoming meeting.