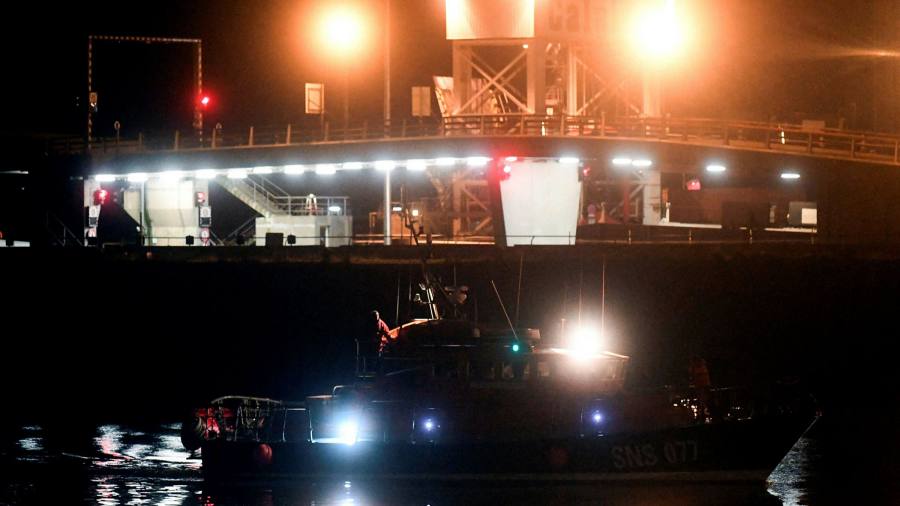 Click here to listen to the latest news in less than three minutes. Top Stories Today is an audio news digest that gets you up to speed on the day’s headlines.

More than 30 people have drowned during an attempt to cross the English Channel from France in the worst accident since the beginning of a surge of clandestine small-boat crossings that have frayed relations between Paris and London.

French officials said they were alerted to the disaster by the crew of a fishing boat who saw people in the sea in the Dover-Calais strait. Gérald Darmanin, France’s interior minister, said 31 people had drowned after the migrant boat capsized, including five women and a girl.

“It was an extremely frail boat, and when the rescuers arrived the boat had deflated like an inflatable garden pool.”

The AFP news agency reported that prosecutors in Dunkirk had launched an inquiry into possible offences of people smuggling and aggravated involuntary manslaughter.

Thank you for reading FirstFT Europe/Africa. Here is the rest of today’s news. — Jennifer

2. Jamie Dimon apologises twice over China comment The JPMorgan Chase chief executive has issued two separate apologies after telling a group of US business leaders that the Wall Street lender would outlast the Chinese Communist party. His public climbdown underlines that the bank and European rivals believe there is a big prize worth chasing in China.

3. Sweden’s PM resigns hours after taking office Magdalena Andersson stepped down as the country’s first female prime minister just seven hours after gaining backing from parliament, when her new partners from the Green party quit the coalition and her centre-left government collapsed.

4. Government-backed review calls for shake-up of English football The sport is set for a radical makeover that would include powers to block club ownership changes, a veto for supporters over crucial decisions and a redistributive levy on Premier League player transfers under the proposals.

5. Three men found guilty of murder in shooting of Arbery A US jury has found three white men guilty of murdering Ahmaud Arbery, a 25-year-old black man who was shot while jogging in Georgia last year in an incident that fuelled racial justice protests across the US.

European Central Bank meeting minutes How long do ECB rate-setters expect to keep buying bonds and when might they raise interest rates from their ultra-low levels? More clarity is expected on these crucial questions when the minutes of last month’s policy meeting are published.

British International Investment launch Liz Truss, UK foreign secretary, is due to unveil the body that will leverage private capital to invest in countries across Asia, Africa and the Caribbean, offering an alternative to Chinese loans, which some see as a tool to spread Beijing’s influence.

US Thanksgiving holiday Fears of a Covid-19 surge come on the cusp of the holiday, when tens of millions of Americans will travel to reconnect with their families, some of them for the first time since the start of the pandemic. But returning consumers should expect higher prices this year.

Scholz bridges political differences to become Merkel’s heir On Wednesday, Olaf Scholz sealed one of the most remarkable comebacks in German politics: written off for months as an also-ran, he stood before a packed hall as the country’s new chancellor. His coalition deal now focuses on climate investment along with commitments on wages and pensions.

Sometimes we need to ‘unbelieve’ our tribe In today’s “attention economy”, it often seems that people have decided on what they believe not after a rational assessment of the facts, but according to the belief system of their ideological camp. Jemima Kelly asks what is making us all so unwilling, perhaps even unable, to understand the “other side”?

Inside Boris Johnson’s Downing Street A series of policy mishaps has drawn attention to the UK prime ministerial operation, which some believe lacks experience ahead of major winter challenges. Here are the four groups of Number 10, each with distinct priorities, vying for Johnson’s ear.

Is it time to be open about pay? Chances are, not even your best friend knows how much you earn at work. In this episode of the FT podcast Working It, host Isabel Berwick tries to work out what we are worried about. Plus, she talks to Brooke Masters about how to negotiate a pay rise.

The US and China are already at war. But which kind? As hedge fund luminary Ray Dalio has noted, conflicts can erupt on many fronts, not just kinetic. “There’s a trade war, a technology war, a geopolitical war, a capital war and there could be a military war . . . and there’s good reason to worry about the fifth type,” he told Gillian Tett.

Thanks to readers who took our poll yesterday. Sixty-two per cent said global brands were facing a “tipping point” in balancing ethics with China.

Ridley Scott has called his chaotic new film House of Gucci “satire”. In other words, it is meant as a joke. That explains a lot. Scott is many things, among them a sometimes peerless grand-design film-maker. A comedian he is not, writes FT film critic Danny Leigh.