It’s the holiday season again, and while that may mean early alarm clocks or camping out in front of stores to grab the best “doorbuster” deals for many of us, it’s arguably an even more important time for retailers.

How important are holidays for retailers? It varies from business to business, but the range roughly spans from “very, very important” to “make-or-break the entire year important.” As the below chart shows, some stores see well over a third of their total business for the year in Q4 alone, with most of those sales concentrated in the last six weeks of the quarter: 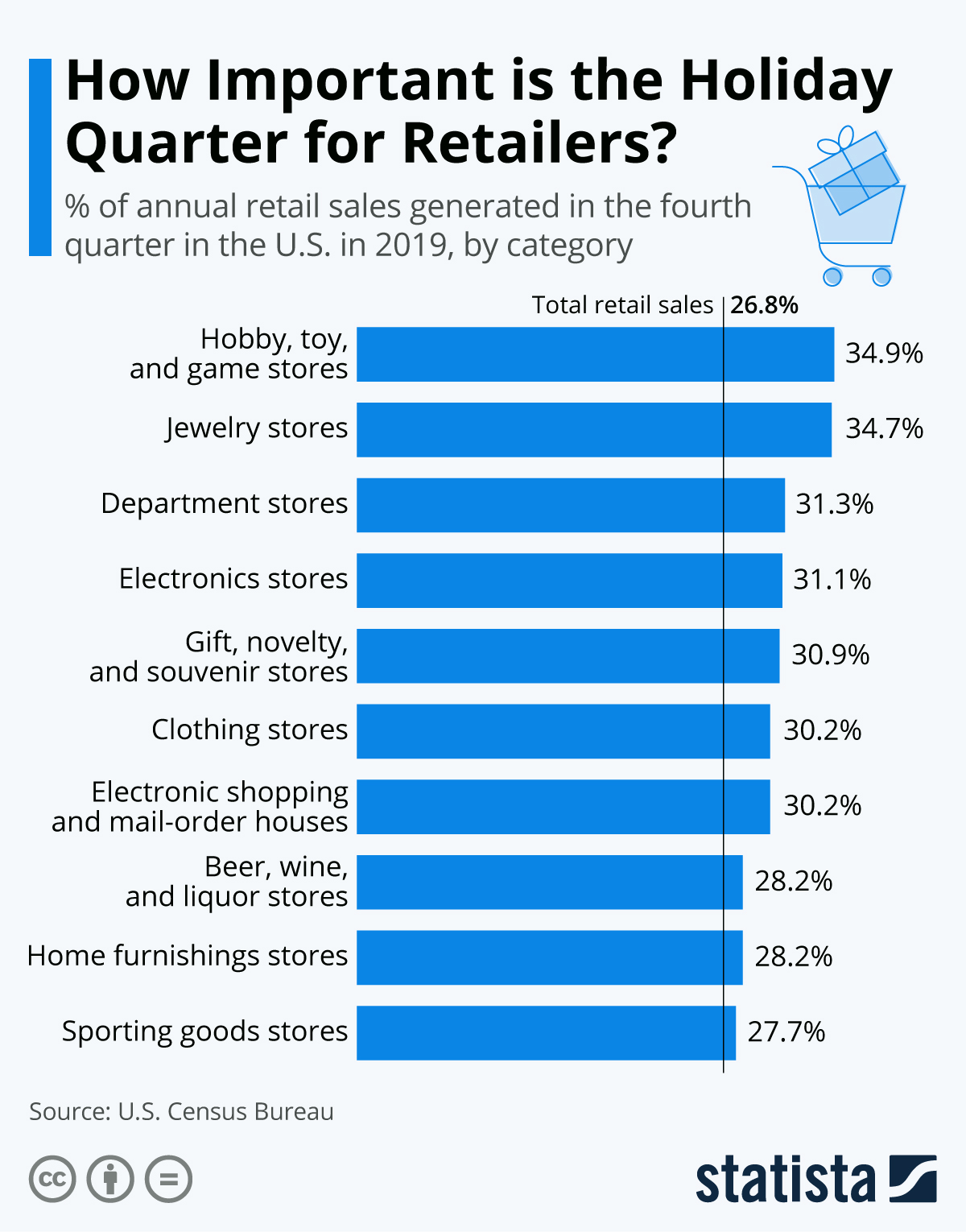 As we approach the proverbial retailer “Super Bowl” this year, there are three key themes to watch, both for the broader economy and more importantly, for us as traders, for market movements:

The ongoing snags in global supply chains (and the ensuing inflationary pressures—more on that below) have been a major theme of 2021 so far, and the upcoming holiday period may only exacerbate the issue in the short term.

Interestingly, consumers are starting to plan around the potential for shipping delays on their gifts rather than risk having empty Christmas stockings for their loved ones (as an anecdote, my wife’s already essentially done with her Christmas shopping; your humble author has so far stuck with his usual blasé schedule of not starting to think about it until after Thanksgiving).

To the extent this impacts consumer behavior, we could see peak holiday sales shift a couple weeks forward and an uptick in brick-and-mortar sales at the expense of online retailers, as some consumers may rationalize that “a gift in their hands is worth two in the mail.”

2. Labor prices on the rise

In addition to inflation from supply chain disruptions, many retailers are also navigating an environment where workers have their most leverage in decades to demand higher wages.

One obvious side effect of this situation writ large is that retailers may raise prices to pass along their higher costs to consumers, driving nominal retail sales figures (price * volume) higher even if consumers collectively purchase the same amount of goods and services as in recent years.

Thankfully, many consumers can afford rising prices this year, even if they’d prefer not to. The US savings rate finally moderated back to pre-pandemic levels near 7.5% in September. But that comes on the back of more than a year with the measure above 12%, a figure last seen consistently nearly 40 years ago:

In other words, consumers in the US (and throughout most of the developed world) are sitting on nearly unprecedented savings after more than a year and a half of scrimping. With COVID still plaguing the planet, they may be hesitant to blow all their accumulated savings in one holiday period, but at the margin, consumers’ fat pocketbooks argue in favor of a strong holiday period for retailers.

As the three themes above imply, there’s a strong case for a stronger-than-usual holiday shopping period this year. From a macroeconomic perspective, such a development would boost near-term global growth, though much of that could be due to an increase in nominal prices, rather than inflation-adjusted “real” growth.

For traders, an unexpectedly strong holiday shopping period could provide a short-term boost to indices and the in particular.

With fears of shipping delays and costs still lingering in many consumers’ minds, traditional brick-and-mortar retailers may be able to claw back some market share from ecommerce-only shops; accordingly, traders who are bullish on the prospects for this year’s retail “Super Bowl” may want to look for buying opportunities in psychical-first outlets like Walmart (NYSE:) and Costco (NASDAQ:).

Traders who are pessimistic on the prospects of a meaningful uptick in sales over this holiday period may want to consider short positions in internet-first retailers like Amazon and Alibaba (NYSE:):

Kenyan fintech Asilimia raises $2 million in a pre-seed round, plans to extend loans to MSMEs and expand in East Africa – TechCrunch