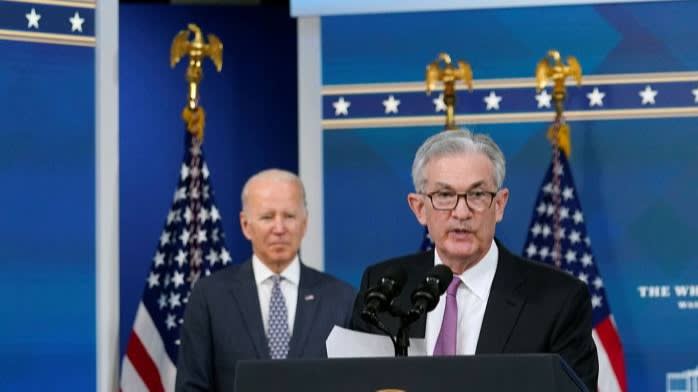 Click here to listen to the latest news — in less than three minutes. Top Stories Today is an audio news digest that gets you up to speed on the day’s top headlines in three minutes or less. Listen every weekday by clicking here.

Joe Biden has nominated Jay Powell to serve a second term as chair of the Federal Reserve, opting for continuity at a delicate moment for the US economy as it confronts persistently high inflation and a patchy labour market recovery.

Lael Brainard, considered Powell’s main competitor for the top job, was selected for the role of vice-chair, a position at present held by Richard Clarida.

Biden praised Powell’s response to the coronavirus pandemic, his commitment to the Fed’s goals of full employment and stable prices, and his defence of the central bank’s “integrity and credibility” during the administration of former president Donald Trump.

The decision ends months of speculation about the Biden administration’s appetite to reshape the Fed. It comes as the central bank debates how to fine-tune monetary policy in the face of supply-related disruptions and mounting inflationary pressures.

What do you think of Biden’s decision to reappoint Jay Powell as Fed chair? Tell me what you think at firstft@ft.com. Thanks for reading FirstFT Asia. — Emily

1. Weak performance in Asia-Pacific markets Most markets in Asia-Pacific fell yesterday as investors began the week on a cautious note. Shares in Reliance Industries tumbled more than 4 per cent after the Indian conglomerate revealed that a $15bn deal with Saudi Aramco had been called off. And shares in the recently listed financial services company Paytm plunged for the second day.

2. Elizabeth Holmes describes Theranos’s mission to jurors The Theranos founder accused by US prosecutors of defrauding hundreds of millions of dollars from investors, took the stand in her own criminal trial, telling jurors: “We thought this was a really big idea.”

4. Uber to sell cannabis to customers in Canada Uber is adding cannabis to the list of items that can be ordered through its app, though for now it will be pick-up only, and only for customers in Ontario, Canada. From Monday, users in the province can buy the drug via a new cannabis category in the Uber Eats app, to be picked up within the hour.

5. Five die as car is driven into Wisconsin Christmas parade A sport-utility vehicle drove into a Christmas parade in a suburb of Milwaukee yesterday, killing at least five people and injuring 48 adults and children. The suspect, Darrell Brooks, 39, would be charged with five counts of intentional homicide, police said.

Funeral service for MP David Amess Mourners will reflect on the significant contribution of public service made by David Amess, the Southend West MP who was killed at a constituency surgery meeting last month.

China’s exiled crypto machines China’s ban on cryptocurrency mining in May triggered an exodus of miners and a global race to relocate millions of the clunky, power intensive machines they use to solve complex puzzles and earn bitcoin. From Venezuela to Russia, data collected by the FT map where the machinery ended up.

Inside Modi’s U-turn on farming laws Prime minister Narendra Modi made a rare apology last week when he made a stunning reversal by pledging to repeal contentious farm laws. Analysts said the climbdown reflected the ruling party’s growing anxiety about its prospects in elections next year in Uttar Pradesh.

Peng Shuai’s plight poses Olympics headache for China Communist leaders may have underestimated the world’s alarm about the tennis star’s disappearance, writes Tom Mitchell. Instead, party leaders are more concerned about how to quash — and quash quickly — the rapidly developing scandal.

Where did all the workers go? Two years of unprecedented upheaval in labour markets has caused millions on both sides of the Atlantic to step out of the workforce. Is it the result of reduced migration? Early retirement? And will it last? This is the first part of an FT series analysing how the pandemic has transformed the labour market.

How to nudge an asteroid off course There is always a touch of Hollywood about a rocket launch, but the Nasa mission due to leave Earth this week is more dramatic than most, writes Anjana Ahuja. The mission, to slam a spacecraft into an asteroid to knock it off course, is a dummy run for a strategy that might one day save the planet.

Thank you to readers who shared their views on US President Joe Biden considering a diplomatic boycott of the Beijing Olympics.

“If the US boycotts the Beijing Olympics for diplomatic reasons then it will affect the world economy. On the other hand, if I consider only Uyghurs and the genocide, I strongly support the diplomatic boycott. As a person who grew up in a small nation that also suffered from genocide and oppression by the Japanese government, I wish the US government would speak up more loudly for the minority ethnic groups in China.” — Minhee Kim, Seoul, South Korea

“A boycott of the Beijing winter Olympics by the US will backfire on the co-operation needed to move forward on the most pressing issues the world is facing right now. Yes, there is a geopolitical rivalry between the US and China and clearly not everything China does should be tolerated silently; however, a boycott by the US will do nothing to deter China from realising its vision . . . More trust between the two powers is what is needed rather than insult. The recent reach-out by the Biden administration to start a dialogue with its rival sets a better example for resolving geopolitical differences.” — Gijs Holstege, The Hague, Netherlands

A European Debt Crisis Is Bullish For Bitcoin –…