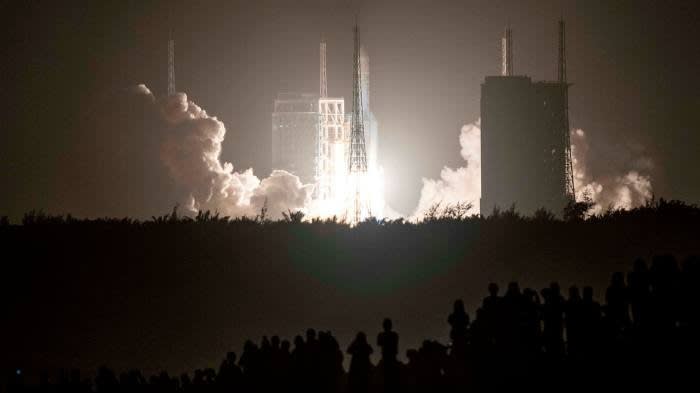 
China’s hypersonic weapon test in July included a technological advance that enabled it to fire a missile as it approached its target travelling at least five times the speed of sound — a capability no country has previously demonstrated.

Pentagon scientists were caught off guard by the advance, which allowed the hypersonic glide vehicle, a manoeuvrable spacecraft that can carry a nuclear warhead, to fire a separate missile mid-flight over the South China Sea, according to people familiar with the intelligence.

Experts at Darpa, the Pentagon’s advanced research agency, remain unsure how China overcame the constraints of physics by firing countermeasures from a vehicle travelling at hypersonic speeds, said the people familiar with details of the demonstration.

Military experts have been poring over data related to the test to understand how China mastered the technology. They are also debating the purpose of the projectile, which was fired by the hypersonic vehicle with no obvious target of its own, before plunging into the water.

What’s your reaction to China’s technological advance? Tell us what you think at firstft@ft.com. Thanks for reading FirstFT Europe/Africa. — Jennifer

1. KKR makes €33bn buyout offer for Telecom Italia The US buyout fund has launched a more than €33bn offer to take Telecom Italia private in what would be one of the largest private equity buyouts of a European company in history.

2. HSBC faces struggle to attract Big Four bids The UK’s largest lender fears it will struggle to convince some of the country’s biggest accounting firms to bid for its $94m-a-year audit after initial outreach to contenders suggested a number of Big Four firms were reluctant to take on the role.

4. Tories ‘losing support’ over migrant surge Senior Conservatives have warned Boris Johnson of a backlash from their supporters over a surge in the number of migrants crossing the English Channel, as the UK prime minister set up a new cross-departmental task force to tackle the issue.

5. Olympics chief holds video call with missing Chinese tennis star Thomas Bach said he held a 30-minute video call with Peng Shuai on Sunday, with the International Olympic Committee stating she was “safe and well” in Beijing but that she “would like to have her privacy respected at this time”.

Join over 100 influential leaders and the FT’s top journalists from across America and around the world for the Global Boardroom conference as they discuss how to build resilient, sustainable, inclusive economies and businesses in a world transformed by crisis. Register for free here.

World Trade Organization meeting The organisation’s general council will meet in Geneva ahead of its 12th ministerial conference, a gathering of its highest decision-making body, on November 30. (BBG)

CBI annual conference Tony Danker, director-general of the UK’s largest employer group, will announce plans for a new regional unit with its own steering committee and director to boost growth, skills and investment around the country. He told the FT that five decades of “benign neglect” of regional industries has left Britain with a “branch line”, London-centric economy. CBI is also due to release its monthly industrial trends survey.

Zoom earnings The video conferencing platform reports numbers for the third quarter, as it wrestles with the need to broaden its scope as staff return to the workplace and become less reliant on screen-based meetings. US financial software maker Intuit releases results for the first quarter.

Is it time to get worried about inflation? With prices at multi-decade highs in the US and other advanced economies, the subject has shot to the top of the economic agenda so rapidly that what was a niche concern at the start of 2021 is now at the heart of politics. For policymakers, a wrong response could derail the recovery.

The Spac machine sputters back Sponsors hope that the market’s signs of life signal it is maturing. Some have drawn analogies with the junk bond market, which went through a frenzied boom period followed by scandal in the 1980s before becoming an integral part of the modern financial system.

Too much choice is confusing and unsustainable In a restaurant, Andrew Hill tends to opt for the set menu rather than going à la carte. “Confronted with an abundance of choice, I am an indecisive shopper, so news of simplification is cheering”, he writes. Similarly, supply chain shortages and a climate crisis are reminding companies that less is often more.

Where did all the workers go? Two years of unprecedented upheaval in labour markets has caused millions on both sides of the Atlantic to step out of the workforce. Is it the result of reduced migration? Early retirement? And will it last? This is the first part of an FT series analysing how the pandemic has transformed the labour market.

EU fiscal rules need more than technical tweaks In Freudian psychoanalysis, neurotic behaviour is the manifestation of repressed feelings. In the EU’s obsession with codified rules, it is politics that is being repressed. That is why the relaunched debate on fiscal rules is going to be difficult, writes Martin Sandbu.

Could you work from home in the Alps? During the pandemic, some skiers have been doing just that. FT’s Liz Rowlinson explores whether the romantic vision tallies with the reality.