After plunging due to the global health crisis, the personal luxury goods market returned to pre-pandemic growth in 2021, with sales estimated to top 283 billion euros ($325 billion) by year-end, according to a new report by Bain & Company. That would represent a slight increase from then-record sales of 281 billion euros ($318 billion) in 2019.

Bain analysts note that these figures include only high-end merchandise, from leather handbags to jewelry to fragrances. Luxury “experiences,” like travel and dining, still lag 2019 levels due to the ongoing pandemic.

The V-shaped recovery was largely powered by the U.S. and China, with U.S. consumers outspending their Chinese counterparts by 1.5 times, the report says.

That’s despite the fact that the luxury market in China has nearly doubled since 2019. Consumers there are so hungry for luxury brands that Louis Vuitton is reportedly considering opening its first duty-free store in China, on the island-province of Hainan, which has rapidly become a luxury shopping destination for Chinese tourists unable to travel overseas due to pandemic restrictions.

Louis Vuitton, or LV, is the largest brand in the giant stable of luxury goods companies owned by LVMH Moët Hennessy Louis Vuitton. The Paris-based conglomerate reported record revenue of 44.2 billion euros ($51 billion) in the nine months ended September 30, an 11% increase from the same period in 2019.

Looking at demographics, the biggest contributors to the global sales recovery in 2021 were millennials and Gen Z, the oldest of whom are 40, according to Bain. These two cohorts are expected to make up 70% of all spending on luxury items by 2025.

Bain’s report helps underscore the reason why I was interested in providing an easy way for investors to gain access to the luxury goods market. As I’ve said before, there was initially some pushback to the idea, especially during the pandemic.

The Global Luxury Goods Fund (USLUX) became available in July 2020 after changing its name and investment strategy. Since then, it’s done better than even I imagined. For the 12-month period through September 30, USLUX beat its benchmark, the S&P Composite 1500, by more than 750 basis points, on impressive revenue generated by many of the fund’s top holdings.

That includes Tesla (NASDAQ:), which now ranks third among luxury automakers in the U.S., having surpassed Mercedes-Benz in sales during the first nine months of 2021. Toyota-owned Lexus holds the number two spot, while BMW, also held in USLUX, tops the list. To see the top 10 holdings, click here. 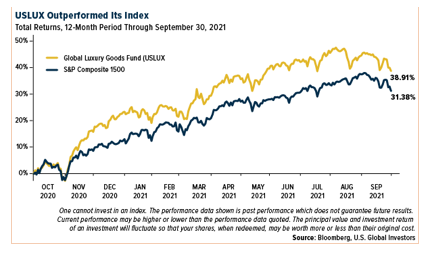 Retail, and particularly luxury retail, has done very well during the pandemic as consumers reallocated discretionary spending from services to goods. Low interest rates and government-issued stimulus checks also supported consumption, which doesn’t appear to have been impacted by higher inflation.

Obviously, these conditions won’t last forever, but I’m bullish on the luxury goods market, especially in China, India and other emerging markets that are seeing a steady expansion of household income as well as growth in the number of people joining their middle class.

Disclosure: Performance data quoted above is historical. Past performance is no guarantee of future results. Results reflect the reinvestment of dividends and other earnings. For a portion of periods, the fund had expense limitations, without which returns would have been lower. Current performance may be higher or lower than the performance data quoted. The principal value and investment return of an investment will fluctuate so that your shares, when redeemed, may be worth more or less than their original cost. Performance does not include the effect of any direct fees described in the fund’s prospectus which, if applicable, would lower your total returns. Performance quoted for periods of one year or less is cumulative and not annualized. Obtain performance data current to the most recent month-end at www.usfunds.com or 1-800-US-FUNDS.

In Amazon scuffle, Visa’s loss could be Affirm’s gain – TechCrunch

Inflation: is now the time to get worried?