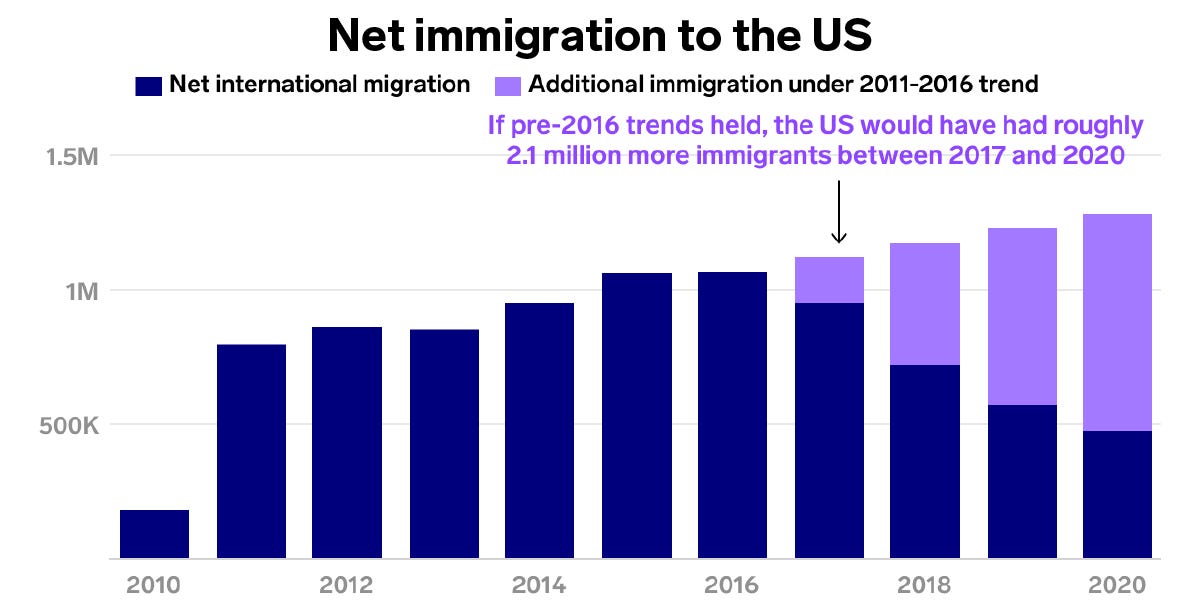 
American businesses are feeling the impact of the current labor shortage as they struggle to hire amid a record high wave of people quitting — and Trump-era immigration policies could be to blame.

Roughly 3 million fewer people in the US are working or looking for work than in February 2020, as measured by the Bureau of Labor Statistics labor force participation rate. That’s the labor shortage in a nutshell.

But what if we told you that problem could be cut down to just a third of its size by going back to a pre-Donald Trump legal regime?

The current dearth of workers is mirrored by the number of working-age adults who would have lived in the United States if pre-Trump immigration trends persisted, according to 2020 US Census data.

Former President Donald Trump’s administration was more restrictive to immigration than any other in recent history, making good on Trump’s rhetoric antagonizing immigrants of color, specifically undocumented and Latinx immigrants. According to the Migration Policy Institute, the Trump administration undertook over 400 executive actions on immigration.

We estimate that in all, about 2 million of America’s missing workers are immigrants who never came to the US.

Between 2011 and 2016, the US was gaining an additional 54,000 net immigrants each year. But that began to turn around, with net international migration declining each year between 2017 and 2020. If the early-decade trend continued instead, the US would have added about 2.1 million immigrants over those four years:

Trump-era policies are responsible for the missing workers

As it turns out, industries facing labor shortages — truck drivers and construction workers, namely — would have benefited from immigrant workers had Trump-era policies not prevented them from entering the US.

All four industries saw increases in job postings of more than 65 percent from 2019 to 2021, when comparing the period between May to July for those two years. Immigrants make up more than a fifth of the workforce in those industries.

Immigrant workers account for about a quarter of the construction workforce as well, the National Association of Home Builders reported in March. That share is even higher when it comes to construction tradesmen, and is as much as 40% in states like California and Texas. These numbers would be even higher if they accounted for construction workers hired informally.

The National Foundation for American Policy projected last year that Trump administration policies reduced legal immigration by about 49% during Trump’s time in office. They also projected that average annual labor force growth would be about 59% lower as a result of the policies.

Trump issued more than 40 immigration policy changes after the onset of the pandemic, limiting legal roads to immigration and tightening rules for undocumented immigration.

He also banned asylum seekers last March, for example, re-implementing the policy and eventually extending it indefinitely throughout the year. Similarly, he indefinitely postponed hearings for immigrants returned to Mexico under the Migrant Protection Protocols.

2021 continues to chart record numbers of workers quitting. Roughly 4 million people, about 3% of workers, voluntarily left their jobs in September, according to the U.S. Bureau of Labor Statistics’ most recent survey. That’s up from 4.3 million in August, and 4 million in July. These are the largest mass resignations the US has seen in the two decades since the government started documenting them.

This labor shortage has been affecting American consumers as well, causing supply chain issues and greater price inflation, which recently hit a 30-year high in the U.S.

“When you don’t have the truck drivers and we don’t have the people that are working in construction, then economics says prices are going to go up,” Julie Palmer, a human resource professor at Webster University, told KSDK News on Monday.