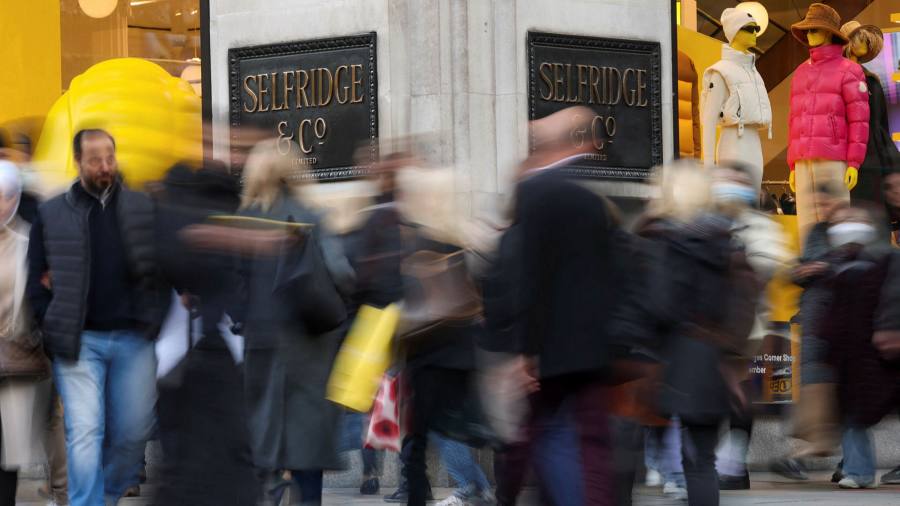 UK consumer confidence improved in November despite surging inflation, easing some economists’ concerns about the spending recovery in the run-up to Black Friday and Christmas.

The UK consumer confidence index, a closely watched measure of how people view the state of their personal finances and economic prospects, rose 3 points to minus 14 in November, according to research company GfK.

The reading is based on data collected between November 1 and 12. It was stronger than a fall to minus 18 forecast by economists polled by Reuters and it improved expectations for consumer spending for Black Friday and Christmas, despite a sharp increase in inflation over the past few months.

There was also a small rise in people’s perception of their personal financial situation for the year ahead, possibly reflecting a buoyant jobs market with record-high vacancy rates.

How optimistic are you about your personal finances and the economy? Why? Let us know your thoughts at firstft@ft.com. Thanks for reading FirstFT Europe/Africa — Jennifer

2. UK justice minister invested in contested tax scheme Lord David Wolfson QC invested in a scheme in 2011 that made £134m in tax allowances for investors who paid £79m towards the construction of two data centres, now the subject of active litigation with the tax authorities.

3. US states investigate Instagram’s targeting of youngsters At least nine states are examining whether Facebook violated state consumer protection laws and “put the public at risk” by promoting the app to young people “despite knowing that such use is associated with physical and mental health harms”, said Maura Healey, Massachusetts attorney-general.

4. Biden considers diplomatic boycott of China’s Winter Olympics The US president said a diplomatic boycott was “something we are considering”, in a move that would inject fresh tension into the US-China relationship just days after his virtual meeting with Chinese leader Xi Jinping.

5. COP26 emissions target pledges face scrutiny Big polluting nations have cast doubt on whether they would upgrade their emissions targets next year, after agreeing at the climate summit in Glasgow to “revisit and strengthen” them in line with the Paris accord.

Read today’s Delivering Healthcare special report on how the coronavirus pandemic has overturned the world’s health systems, and watch a video on how hospitals learned to work in new ways.

Join us December 7-9 at the Global Boardroom for discussions on the challenge of building sustainable growth in a world transformed by crisis. Hear from over 100 influential leaders including Faryar Shirzad, chief policy officer of Coinbase. Register free here today.

How the valuation chasm in markets can be bridged To understand why there is a divergence on how market participants view young growth-driven companies, we must look at what they have in common, writes Aswath Damodaran, professor at the Stern School of Business at New York University.

What parking tickets tell us about political corruption Corruption is a function of many things, from political incentives to culture. Take parking illegally while hiding behind diplomatic immunity, as more than a few consulate staff did in New York City between 1997 and 2002. Similarly, there is a long history to UK prime minister Boris Johnson’s breaches of parliamentary rules.

Crypto in the classroom In an age when trading apps have made investment cool and cryptocurrencies have whipped the untrained teen mind into a frenzy, understanding money is more important than ever for students. Lucy Kellaway looks at some ways we can turn children into financial literate adults.

Can guilt help bankers change for the better? Should financiers feel guilt? Would that make the world of money safer? These questions have cropped up since the 2008 Financial Crisis, and now the New York Federal Reserve is exploring the issue in a forward-facing — and geeky — way.

The cup of tea needs a spoonful of sophistication The British are said to love little more than a cup of tea, but that affection is not shared by Unilever. Its €4.5bn sale of some of the world’s biggest tea brands shows how unsentimental companies can be. It also raises an unsettling question: is black tea, brewed in a teapot and served with milk, becoming a relic?

Thank you to readers who took our poll yesterday. Sixty-seven per cent of you thought the US-China nuclear “stability talks” would not be successful.

We asked FT readers to share and recommend what they’ve been reading — and here’s what they told us, from John le Carré’s swansong to a moving novel of lost identity and poverty after the Algerian war of independence.

A Brief Introduction To RGB Protocols