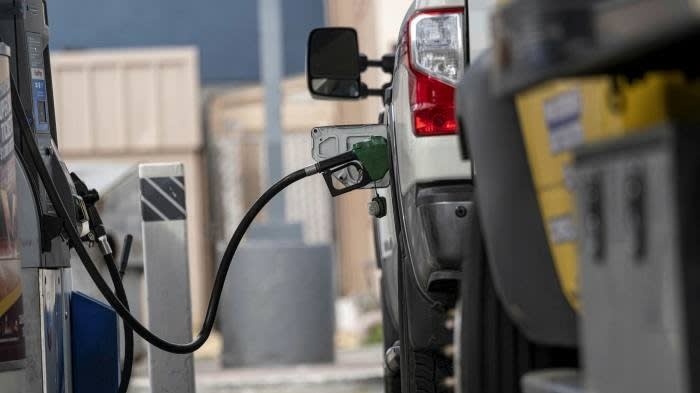 US President Joe Biden has called on the Federal Trade Commission to investigate whether the country’s biggest oil companies including ExxonMobil and Chevron are engaged in “potentially illegal conduct” that is resulting in higher gasoline prices for Americans.

In a letter to FTC chair Lina Khan, Biden said there was “mounting evidence of anti-consumer behaviour” in the market, noting that the two “largest oil and gas companies . . . as measured by market capitalisation” were planning “billions of dollars of stock buybacks and dividends” even as prices at the pump continue to rise.

The president’s intervention comes as he faces mounting political pressure over rising fuel prices and surging inflation. His approval rating has slumped in recent weeks, with an increasing share of Americans taking a dim view of his handling of the economy.

What do you think of Joe Biden’s handling of the economy? Tell me what you think at firstft@ft.com. Thank you for reading FirstFT Asia. Here’s the rest of today’s news — Emily

2. US and UK say Iran is behind ransomware campaign Authorities of both nations have said Iran is conducting an “ongoing” campaign of ransomware and other cyber attacks on US critical infrastructure and Australian organisations that began in March.

3. India closes coal-fired plants because of toxic smog Indian regulators have closed six of the 11 coal-fired power plants within a 300km radius of New Delhi, as the capital has been blanketed by toxic smog for nearly two weeks.

4. LA’s Staples Center to be renamed Crypto.com Arena One of the best-known sports and entertainment arenas in the US is being rebranded as the Crypto.com Arena. The Singapore-based cryptocurrency platform will pay more than $700m for the naming rights to the Los Angeles complex for the next 20 years, according to people familiar with the transaction.

5. Barclays investors raise alarm over terms of Staley’s exit Three of Barclays’ top 20 shareholders have raised concerns over the terms of Jes Staley’s exit from the British bank. Staley resigned earlier this month following a probe into his past ties to convicted sex offender Jeffrey Epstein and was given a £2.4m pay award.

Japan inflation rate Japanese inflation is still low compared with other large economies, but prices on specific items such as soy sauce and gasoline have recently moved higher ahead of today’s inflation figure report. (Bloomberg)

Patym expected to debut on Indian bourses The payments company is set to make its stock market debut today as India’s largest-ever IPO after it priced its shares at the top of the range last week. (Reuters)

Western brands aim for the sky in Xi Jinping’s China The country’s drive for an “olive shaped” distribution of wealth looks to be an opportunity for western brands, albeit a complicated one that will require them to steer around political and social minefields, Brooke Masters writes.

Thai retail deal adds to questions on market dominance At a time when Toshiba, General Electric and Johnson & Johnson are breaking up, Thailand’s big family-controlled conglomerates such as Charoen Pokphand are building out their sprawling business empires, writes John Reed.

‘Deep distrust’ clouds Xi-Biden agreement on nuclear talks Experts react to the announcement of the US-China talks. “Holding talks is a necessary first step, but the real question is whether the parties have anything substantive to say to one another,” one said.

Do you think the US-China nuclear talks will be successful? Tell us in our latest poll.

Why some fear the next pandemic could be lab-made By manipulating the genetic make-up of certain viruses, scientists can work out what makes them most deadly, and how to identify future threats. But US government funding for scientific research that splices deadly viruses to make them more transmissible is under scrutiny amid safety concerns.

Russian debris should be a wake-up call Russia’s deliberate destruction of a failed satellite this week was rightly condemned by the US as reckless, dangerous and irresponsible, writes Peggy Hollinger. There will be no prosperous global space economy if the environment is quickly trashed.

Isabel Berwick is the FT’s Work & Careers editor and the host of Working It, the podcast about doing work differently. This week’s episode is about what we can learn from companies where everyone always works from home. Listen to a new episode every Wednesday. You can subscribe here.

What themes and stories are you most looking forward to discussing on Working It?
I am really excited to be talking to the people who are trying new, radical things — whether that’s working a four day week, abolishing most managers, or going public with all the salaries in their company. Some of the ideas we cover are “out there”, but all of them are really thought-provoking and help us make sense of the new workplace.

What else are you listening to right now?
My longest pod-lationship is with the Slate Culture Gabfest — I’ve been listening for probably ten or 12 years now. It’s got a blend of regular presenters who feel like friends, interesting guests and ahead-of-the-curve topics for discussion. My new Saturday morning listen, alongside my long standing relationship with Payne’s Politics, a UK politics show hosted by my FT colleague Sebastian Payne, is the FT Weekend podcast. It’s got a perfect, leisurely mix of guests and topics — and it’s already introduced me to new books, ideas and places.

What’s your experience been like returning to the office after the pandemic?
I never really left the office. I live in central London so it’s an easy commute. I have been coming in for a couple of days every week except during the months when we were locked down in our homes. My new workplace concern is perhaps a niche one: I’ve got so used to being in a quiet office that it’s going to be really hard to adjust to the noise level and distraction once it’s full again.

Taproot Kicks Jevons Paradox For Bitcoin UTXOs Into Another Gear