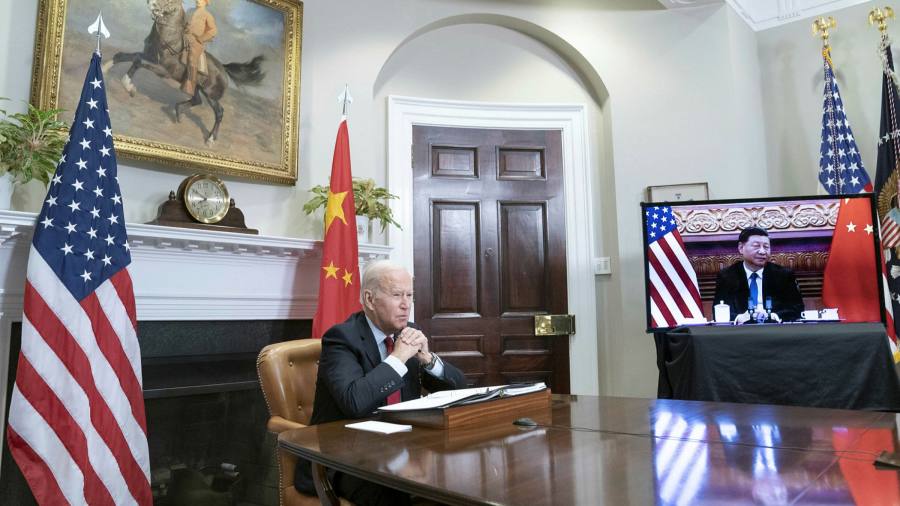 FirstFT: Biden urges Xi not to allow competition to ‘veer into conflict’

Joe Biden has told Xi Jinping that their countries must not allow competition to “veer into conflict”, at the start of a virtual meeting that takes place amid rising tensions over Taiwan.

“We need to establish a common sense guardrail, to be clear and honest where we disagree and work together where our interests intersect,” the US president told his Chinese counterpart.

Biden wanted to hold an in-person summit but Xi has not left China for almost two years because of the coronavirus pandemic. US-China relations are mired in their worst state since the two countries established diplomatic ties in 1979.

Xi said the nations should “respect each other, coexist in peace and pursue win-win co-operation” in what critics say means letting Beijing pursue controversial policies such as the repression of Uyghurs in Xinjiang and the crackdown on the pro-democracy movement in Hong Kong.

Washington is alarmed at the situation around Taiwan, with China flying more and more of its warplanes into the island’s air defence identification zone.

Thank you for reading FirstFT Europe/Africa. Here’s the rest of today’s news — Jennifer

1. Dutch government scrambles to stop Shell move The Hague has launched an eleventh-hour attempt to keep Royal Dutch Shell in the Netherlands by seeking to abolish a dividend tax. The energy group cited the tax as a reason to unify its share structure and move its headquarters to the UK, while attempting to keep shareholders happy.

2. UK accounting watchdog scolds Big Four The head of the accounting regulator has warned top management at Deloitte, EY, KPMG and PwC that they should do a better job of running their businesses. The audit firms have been fined a total of £42m in the past three years for failing to properly check the accounts of companies.

3. Russia warned of hostilities against Ukraine In a joint statement, Heiko Maas and Jean-Yves Le Drian, the foreign ministers of Germany and France, pledged “unwavering support for the independence, sovereignty and territorial integrity of Ukraine”, as ministers held meetings to discuss the threat posed by a build-up of Russian troops on the country’s border.

4. Biden signs $1.2tn infrastructure bill into law Joe Biden signed the Infrastructure Investment and Jobs Act into law yesterday, in a legislative victory for the US president as his approval ratings hit an all-time low.

5. Apollo abandons plan to hire star financier as vice-chair Apollo Global Management said it had been forced to abandon its plan to hire former TIAA boss Roger Ferguson as its vice-chair, after the veteran investment executive revealed commitments to his former employer that barred him from taking up the position.

US trade officials continue Asia tour After meeting with officials in Tokyo yesterday, trade representative Katherine Tai will continue on to South Korea and India, while commerce secretary Gina Raimondo will travel to Singapore and Malaysia. (Politico)

The Macklowe Collection auction The most expensive art collection up for auction will go under the hammer at Sotheby’s in New York. Sotheby’s has estimated the 35 works will fetch $400m or more by the night’s end, with six masterpieces expected to bring in at least $20m each.

Start every week with a preview of what’s on the business agenda in the coming days. You can sign up here to receive the Week Ahead email in your inbox each Sunday.

UN climate process ‘designed to fail’ After Glasgow, it is time to recognise that the UN climate process does not work. This is not because the science discussed at the COP meetings is faulty, writes Gideon Rachman. The problem is political.

Investors pivot to India Long a promising but second choice Asian market for investors, India has emerged as a leading beneficiary of China’s crackdown on technology companies, fuelling a private- and public-market bull run in the country. But is its start-up sector already overheated?

Don’t believe the deglobalisation narrative When Covid-19 hit, many wrote an obituary for China-focused globalisation. But there is little evidence that the pandemic has led companies to abandon the country en masse. Why hasn’t deglobalisation taken hold, asks Megan Greene, a senior fellow at Harvard Kennedy School.

Private equity buyers plot to carve up GE The US industrial conglomerate’s decision to split into three companies has set the stage for a feeding frenzy among private equity buyers, all looking to carve GE into more pieces, say people at several large PE groups.

Cryptocurrencies: how regulators lost control How did regulators lose control of the market worth more than $2tn, and can they get a grip now? Industry voices — including Binance chief executive “CZ” and Sam Bankman-Fried of FTX — and FT reporters take a closer look.

FT management editor Andrew Hill selects his favourite business books of the year, from The Cult of We, an investigation into the rise and fall of WeWork, to Empire of Pain, a dissection of the secret history of Purdue Pharmaceutical’s Sackler dynasty.

How Does Gresham’s Law Relate To Bitcoin