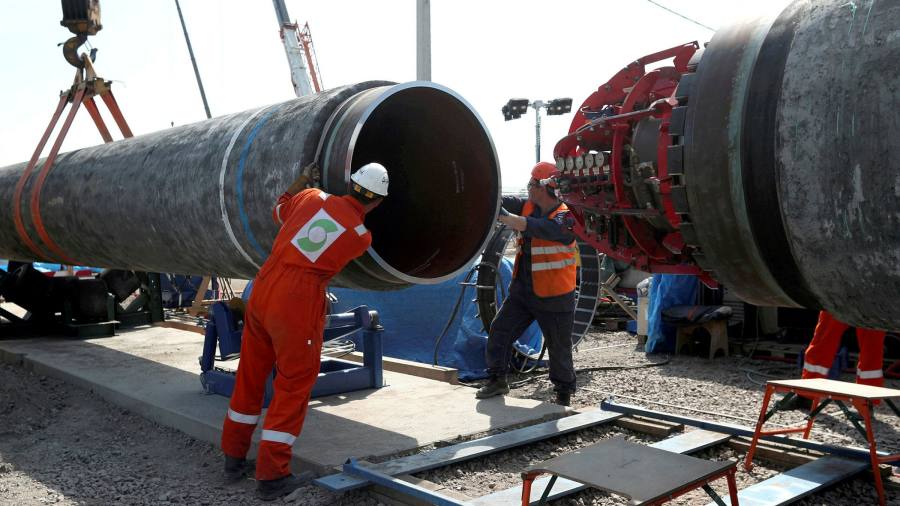 Johnson warns EU to choose between Ukraine and Nord Stream 2


Boris Johnson has warned that the EU faces “a choice” between “sticking up for Ukraine” and approving the Nord Stream 2 gas pipeline, amid fears that Russia is preparing for a possible invasion of the eastern European country.

Hanna Maliar, Kyiv’s deputy defence minister, told the Financial Times over the weekend that western intelligence suggested a “high probability of destabilisation” of Ukraine by Russia as soon as this winter after Moscow massed more than 90,000 troops at its border.

Construction of the Nord Stream 2 pipeline, which will carry Russian gas directly across the Baltic Sea to Germany, was delayed by US sanctions and is strongly opposed by eastern European countries such as Poland, which believe it is designed to starve Ukraine of transit fees for shipping Russian gas.

Ukrainian officials also fear that the alternative gas route to western Europe could make it easier for Russia to invade the country, where it has supported proxy fighters in the eastern Donbass region since 2014, the same year it annexed Crimea from the country.

Dmytro Kuleba, Ukraine’s foreign minister, said in an interview with the Financial Times: “For us Nord Stream 2 is a security issue. We think that the use of migrants against Belarus, the situation around Nord Stream 2, the disinformation campaigns, the military build-up by Russia, are all part of a broader picture. Russia is involved in all of these situations.”

In a Mansion House speech on Monday evening, Johnson said: “When we say that we support the sovereignty and integrity of Ukraine that is not because we want to be adversarial to Russia, or that we want in some way strategically to encircle or undermine that great country.

“It is because we have a commitment to democracy and freedom that is shared now across the vast mass of the European continent. And when our Polish friends asked for our help to deal with a contrived crisis on their border with Belarus, we were quick to respond.

“And we hope that our friends may recognise that a choice is shortly coming between mainlining ever more Russian hydrocarbons in giant new pipelines and sticking up for Ukraine and championing the cause of peace and stability, let me put it that way.”

The UK has accused Alexander Lukashenko, Belarus’s authoritarian leader, of orchestrating a crisis by funnelling thousands of migrants from the Middle East to Belarus’s borders with the EU and encouraging them to enter the bloc illegally.

Writing in The Sunday Telegraph, Truss urged “friends across Europe” to stand together in opposing the Nord Stream 2 pipeline. “It risks undermining European security by allowing Russia to tighten its grip on those nations who rely on its gas,” she wrote.

The comments from Johnson and Truss mark a hardening in tone towards the Nord Stream 2 pipeline project from the UK amid a gas supply crunch that has threatened the economic recovery from the pandemic, forced many UK energy suppliers out of business and fed into fears of a growing “cost of living” crisis.

Eastern European legislators have blamed tight gas supplies this winter on Russia restricting exports to western Europe in order to press Germany to accelerate the pipeline’s start-up following completion of construction in September.

The UK government has offered little direct opposition to the pipeline in the past and has argued that the UK is not reliant on gas imports from Russia, although it has conceded that it is exposed to “volatile” global gas markets. The UK does import gas from the EU which gets up to 40 per cent of its supplies from Russia.

Speaking after the COP26 agreement was watered down in the final minutes at the weekend, Johnson said: “I know how frustrating it was — as we stood on the verge of agreeing to phase out coal — to see that commitment weakened. But I tell you this: I have been watching politics a long time now and I know when a tipping point is reached.

“The language does matter but whether you are talking about phasing down or phasing out, the day is now not far off when it will be as politically unacceptable, anywhere in the world, to open a new coal fired power station as it now is to get on an aeroplane and light a cigar.”

Trump Screamed at Christie Over Jared and Ivanka Charges During Debate Prep: Book