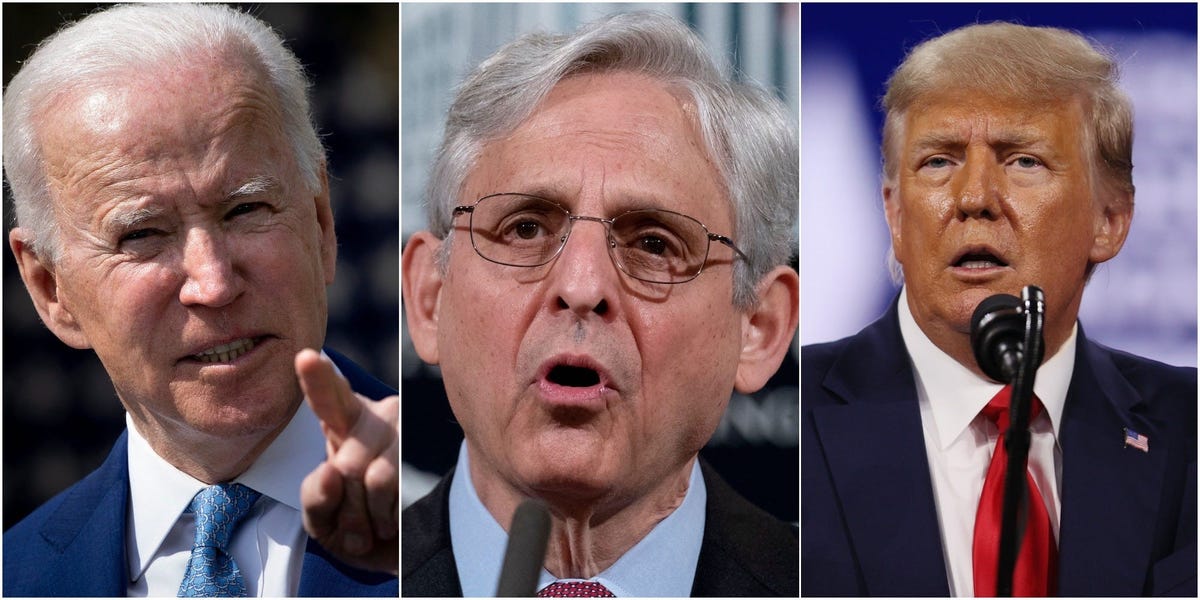 
Welcome back to 10 Things in Politics. Sign up here to receive this newsletter. Plus, download Insider’s app for news on the go — click here for iOS and here for Android. Send tips to bgriffiths@insider.com.

Here’s what we’re talking about:

1. INSIDE THE DOJ: Legal experts want to know what Attorney General Merrick Garland is up to. A vocal subset of them believes there’s sufficient evidence to indict former President Donald Trump, and they are losing patience with a Department of Justice that hasn’t done more publicly to pursue him.

Here’s where things stand on the politically thorny subject:

The silence has not gone unnoticed: Former Justice Department officials and other legal experts told Insider they were struck by the apparent lack of investigative scrutiny of Trump and his inner circle in connection to the January 6 attack on the Capitol.

Pursuing a Trump indictment would be a political minefield: “The AG and the DAG have no appetite for these cases,” a former Justice Department official familiar with the January 6 investigation said, referring to Garland and Deputy Attorney General Lisa Monaco.

A turning point may have just occurred: President Joe Biden’s pick to oversee the January 6 investigation, Matt Graves, was sworn in Friday as the US attorney in Washington, DC. A former federal prosecutor said that with the heft of Senate confirmation, appointees like Graves could take the investigation into more sensitive places.

Read more about how legal experts see ready-made indictments from other Trump scandals.

2. Climate negotiators back away from a pledge to end coal use: Officials at the UN climate talks in Glasgow are now discussing a “phaseout of unabated coal power and of inefficient subsidies for fossil fuels,” the Associated Press reports. This latest draft is a step back from a previous version that called for nations to “accelerate the phasing out of coal and subsidies for fossil fuel.” Here’s where things stand as the pivotal climate summit is set to wrap up.

3. Meet the most popular man in Republican politics right now: Jeff Roe scored a massive win last week after working as a top strategist for the Republican Glenn Youngkin, Virginia’s next governor. Republican candidates across the US have been calling Roe and his firm, Axiom Strategies, to ask about the “Youngkin lane,” he told Insider in a recent interview. Here’s how he thinks the GOP can reclaim control of Congress and the White House.

4. Trump wins temporary reprieve over January 6 documents: A federal appeals court blocked, for now, a ruling that would have required the imminent release of Trump records related to the insurrection, The Washington Post reports. Trump’s legal team sued to block the release after the Biden White House refused to assert executive privilege over the records after the House committee investigating the Capitol riot requested them. More on the ruling and what happens next.

5. Defense expert testifies that Kyle Rittenhouse shot all 3 men within one minute, 20 seconds: John Black, a use-of-force expert, gave a second-by-second breakdown of the events in Kenosha, Wisconsin, to the jury, emphasizing just how quickly the violence escalated. Rittenhouse’s team used Black’s testimony to imply that those select minutes were the only timeframe needed to establish whether Rittenhouse was justified in shooting three men, two fatally. Prosecutors, meanwhile, have examined the hours leading up to the shootings and questioned Rittenhouse’s decisions to attend the protests in the first place and to arm himself with an AR-15 rifle. More on what happened in the closely watched trial as both sides moved toward closing arguments.

6. A defense attorney in the Arbery case asks for “no more Black pastors” in court: Kevin Gough, the attorney who represents one of the white men on trial in the fatal shooting of Ahmaud Arbery, told the judge he didn’t want “any more Black pastors” in the courtroom after the Rev. Al Sharpton sat with Arbery’s family, the Associated Press reports. Gough said Sharpton’s presence was an attempt to intimidate the disproportionately white jury. Sharpton said Gough’s remarks showed “arrogant insensitivity.”

7. Iran-backed rebels breach American compound in Yemen: “Yemeni employees of the US government have been detained in Sanaa, where the compound that housed the American Embassy was breached by Iran-backed Houthi rebels who took control of many of war-torn Yemen’s cities in 2014, according to the State Department,” The Post reports. More on the news.

8. Suni Lee said she was pepper-sprayed in an anti-Asian racist attack: Lee, an Olympic gold medalist, said she was pepper-sprayed by a group of people in a car yelling racial slurs and telling her and her friends to “go back to where they came from.” The gymnast said the attack happened just one week before her interview with Pop Sugar, which was published Wednesday. There have been widespread reports of racism against people of Asian descent during the coronavirus pandemic.

9. Democrats introduce a resolution to censure Republican Rep. Paul Gosar: Lawmakers are introducing a resolution to censure Gosar over an edited anime video in which a character with his face kills another character with the face of Rep. Alexandria Ocasio-Cortez. Gosar confirmed that his office produced the video and called the negative response a “gross mischaracterization” of the post. More on the effort.

10. MoviePass may be coming back: MoviePass’ cofounder Stacy Spikes was granted ownership of the company by a Southern District of New York bankruptcy judge who approved the sale Monday, according to court documents reviewed by Insider. Spikes hopes to relaunch MoviePass next year. Read more about the plans for a relaunch.

Today’s trivia question: Which other president was supposed to have a memorial where the Jefferson Memorial is now located? Email your answer and a suggested question to me at bgriffiths@insider.com.

That’s all for now. Have a great weekend!

How To Mine Bitcoin From Your Apartment

Mongolia has concerns about Rio Tinto’s management of Oyu Tolgoi