Ten days , using the Elliott Wave Principle and technical analysis, I wrote that the recent rally in the : 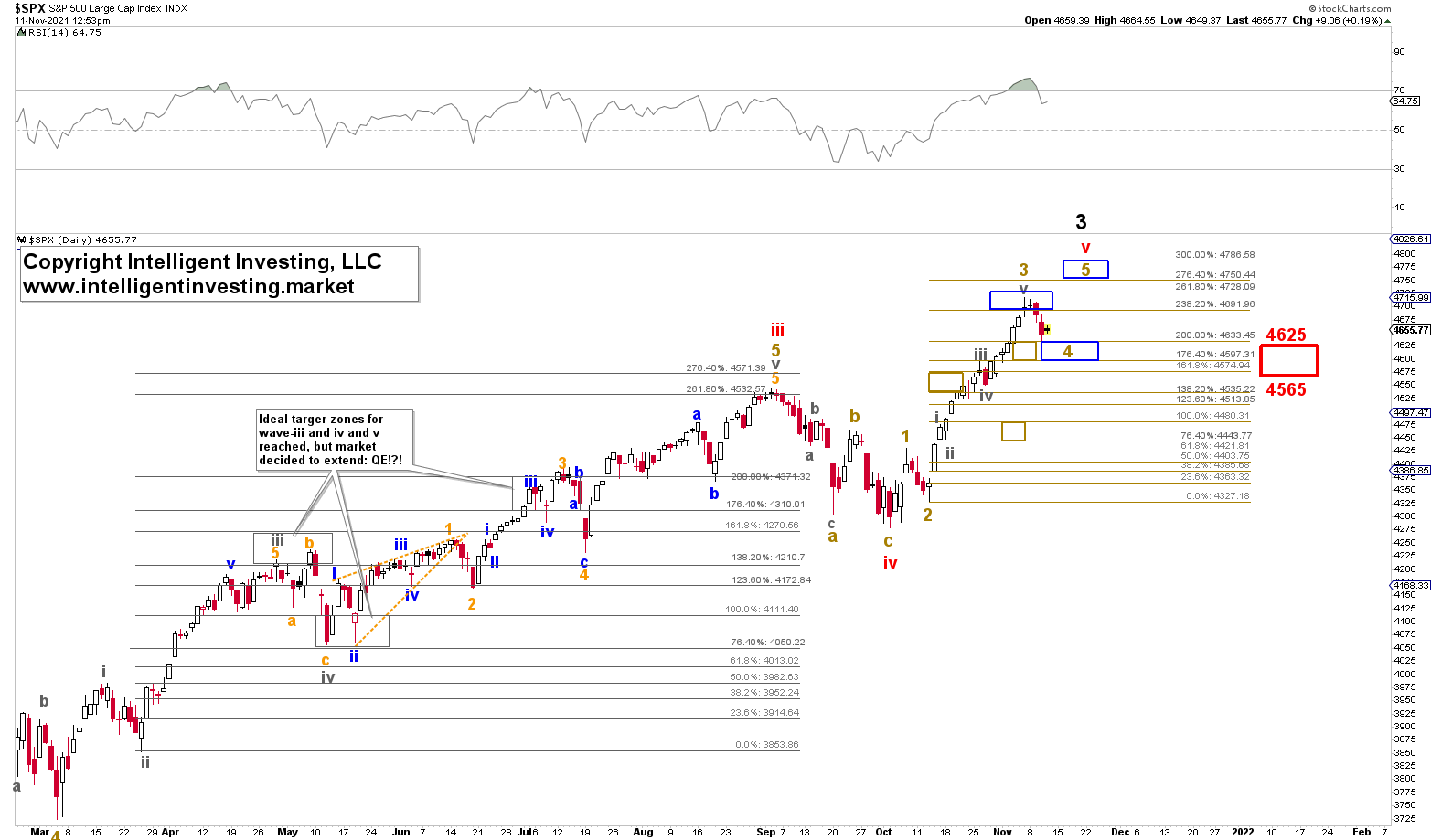 Hence, as said in my last update:

“The green boxes show where wave-3, 4, and 5 typically should top and bottom. However, that is only a textbook, standard, Fibonacci-based pattern, and the market does not have to follow these Fib-based levels. The current rally has not, i.e., it extended, and the blue boxes show where we should now expect wave-3, 4, and 5 to top out, bottom, and top again, respectively.”

Oh boy, did we get another extension on our hands or what?

Thanks to the Federal Reserve’s extra liquidity (QE), maybe? Regardless of the reason, the index topped right in the 238.2-261.8% Fib-extension target zone for, in my opinion, a very extended minor-3 wave. Then yesterday, it dropped to the upper end of the ideal wave-4 target zone.

The red box shows the typical 23.60-38.2% retrace zone of the minor-3rd wave. And so far, the SPX has dropped right to the upper end. Hence, the recent three-day drop has done enough to suggest the minor-4 is completed, albeit it can provide us with a few more twists and turns and go to as low as SPX 4565 if it wants to. But below that level, and I will have to re-assess the markets’ options as then the more extensive (black) wave-3 may have already topped.

However, based on the technical indicators’ extreme overbought readings and strong momentum at last week’s high, the preferred notion is that high was only a 3rd wave and not a 5th wave. Besides, the suggest that at least one more up leg is needed to finish the rally that started in early October as well.

Bottom line: The markets extended their 3rd wave well beyond normal levels for a 3rd wave and should now be close to completing a 4th wave as the upper end of the ideal target zone for this particular more minor wave has already been reached.

How to trade such extensions? I always suggest to my clients to raise stops and sell partial positions into strength. Never anticipate a move, but react to one. By doing so, one can stay within the trend for as long as possible while reducing risk. Besides, as I always say, “in bull markets, upside surprises and downside disappoints.” So far, that is what has happened. Moreover, thanks to the EWP, we know with certainty after wave three come wave four and five, and if the SPX can hold 4565, it should be able to move higher to ideally 4750-4800, baring any 5th wave extensions.