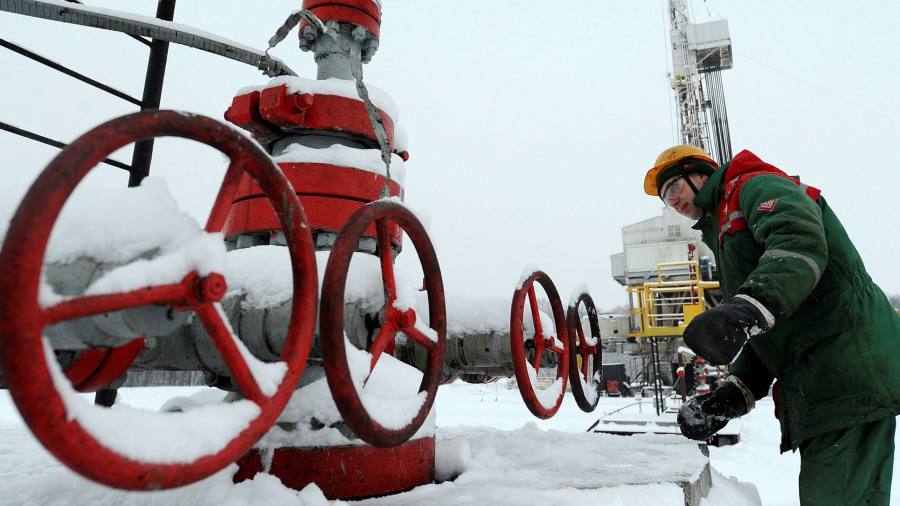 
Alexander Lukashenko has threatened to cut the transit of gas and goods through Belarus to Europe if the EU imposes further sanctions on his regime over the migrant crisis on the Belarusian-Polish border.

The Belarus president was responding to an announcement by Ursula von der Leyen, European Commission president, on Wednesday that the bloc would widen its sanctions on Lukashenko’s regime, accusing Minsk of a “cynical geopolitical powerplay” in funnelling migrants to the EU’s borders in an attempt to destabilise it.

On Thursday Lukashenko warned Minsk would respond to any “unacceptable” sanctions.

“We are heating Europe, and they are threatening to close the border,” he said, according to Belarus state news agency Belta. “What if we cut off gas to them? Therefore I recommend that the leaders of Poland, Lithuania and the other headless people think before speaking. We should not stop at anything to defend our sovereignty and independence.”

European gas prices have soared this year amid concerns over low supplies ahead of winter. Global availability has tightened as economies rebound from the Covid-19 pandemic, with Europe competing with Asia for shipments of liquefied natural gas from suppliers such as the US, Qatar and Australia, while pipeline shipments to western Europe from Russia have been lower than usual.

Prices eased this week amid signs that Russia’s state-backed gas giant Gazprom was beginning to refill its storage facilities in Europe. Gas markets were not immediately spooked by Lukashenko’s threat, rising only slightly. On Thursday morning the European benchmark was up 0.5 per cent at €71.85 per megawatt hour.

As much as 40 per cent of the EU’s gas comes from Russia, with about a fifth passing through Belarus in 2020, according to analysts. But EU lawmakers have accused Moscow of withholding supplies to the bloc in an attempt to speed up approval of the controversial new Nord Stream 2 pipeline through the Baltic Sea.

Thierry Bros, a former oil and gas adviser at the French economy ministry and a professor at Sciences Po in Paris, said Russia and Gazprom would ultimately determine whether Lukashenko carried out his threat.

“They control the transit through Belarus and if Lukashenko was to try and cut supplies, they have significant leverage over his regime and the option of rerouting gas supplies,” he said. “The key question is therefore whether Vladimir Putin supports Belarus in this threat.”

James Waddell at Energy Aspects, a consultancy, said Lukashenko’s threat did not look credible: “[It would be] very hard for the Kremlin not to be politically tied to any Belarus transit crisis and that would provoke an EU response.”

Lukashenko’s salvo comes amid growing international concern over the situation on the Belarus-Poland border, where thousands of migrants have gathered in recent days. Many arrived in Belarus by air from countries including Iraq, Syria and Yemen, and European officials say the surge is being orchestrated by Minsk in an effort to destabilise the EU.

Polish officials said on Thursday that several hundred migrants had attempted to force their way across the border in the area of Bialowieza the previous day.

Migrant smuggling experts from Europol, the international law enforcement body, are travelling to Poland after Warsaw requested their assistance, the European Commission said.

Asked about reports that Poland was pushing migrants back across the border, a commission spokesman said governments should act in line with “fundamental rights” and that Brussels was “looking into humanitarian options and [migrants’] safe return to their countries of origin”.

Von der Leyen has discussed the situation with US President Joe Biden. Russia has, meanwhile, taken an increasingly assertive stance, accusing the EU of fuelling “humanitarian disaster” for not letting the migrants in.

On Thursday, for the second day in a row, Russia sent nuclear-capable bombers into Belarusian airspace. Lukashenko said the move had been agreed with Moscow. “We have to constantly monitor the situation on the border,” he added.

The defence ministers of Estonia, Latvia and Lithuania said in a joint statement that the situation on the border posed “serious threats to European security”, warning of a risk of “provocations and serious incidents that could also spill over into military domain”.

Elon Musk just sold $5 billion in Tesla stock, but he made plans weeks before asking his Twitter followers whether he should sell 10% of his shares