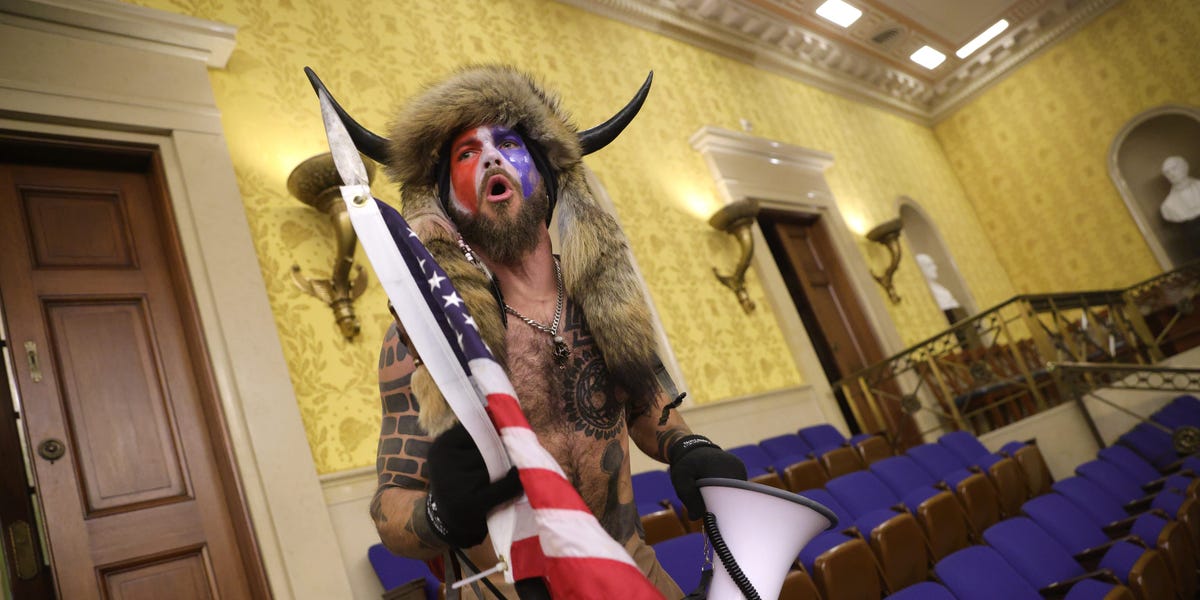 
The lawyer representing “QAnon Shaman” Jacob Chansley is making a fifth plea for his infamous client’s freedom one week before the Capitol rioter is set to be sentenced for his role in the January 6 attack.

Attorney Albert Watkins on Tuesday filed a sentencing memo on behalf of Chansley, arguing for his client’s imminent release for time served.

Chansley pleaded guilty to one count of obstruction in September after spending eight months in jail following his January arrest.

Adorned with horns and face paint, Chansley became one of the most recognizable faces at the Capitol on January 6. Chansley, who admitted in plea papers to being among the first 30 rioters to breach the Capitol, was photographed shirtless walking with his bullhorn and flagpole throughout the building that day and was arrested three days later in his hometown of Phoenix, Arizona, where he was charged with two felonies and four misdemeanors.

In Tuesday’s sentencing memo, Watkins reflected on the images of Chansley that emerged from the insurrection, suggesting that his client’s unorthodox appearance became “inextricably linked” to the events at the Capitol. Watkins argued that photos of Chansley from the scene “have become to January 6 what the Swoosh is to Nike.”

The 23-page document begins with a bolded quote from the 1994 movie “Forrest Gump.”

“My momma always said, you’ve got to put the past behind you before you can move on,” the introductory quote reads.

In the memo, Watkins cited Chansley’s past and current mental health struggles as reasons for his release with time served. The attorney said Chansley spends up to 22 hours a day in solitary confinement, despite not being violent.

Sentencing guidelines suggest Chansley could face 41 to 51 months in prison. Watkins called upon the court to use its “authority and discretion” to impose an alternative to the lengthy term of incarceration in light of Chansley’s “sincere remorse;” acceptance of responsibility; and longstanding mental health diagnosis.

Since Chansley was arrested in January, US District Judge Royce C. Lamberth has thrice denied his requests for pre-trial, and then pre-sentencing release, citing a continued risk that Chansley might flee.

Watkins began soliciting letters on behalf of Chansley in October as yet another attempt to secure his release.

The outspoken attorney told Insider that he is hopeful Chansley will “be seen for who he is…a contrite remoseful young man with mental health vulnerabilities that he is overjoyed to know are recognized.”

“He wishes to be held accountable for his actions,” Watkins said.

Chansley is set to be sentenced on Wednesday, November 17. Nearly 700 people have been arrested in connection to the riot so far, and more than 100 have pleaded guilty.

BHP reaps up to $1.35bn from Australia coal mines in fossil fuels retreat

Savana raises a fresh round of capital to digitize banks’…