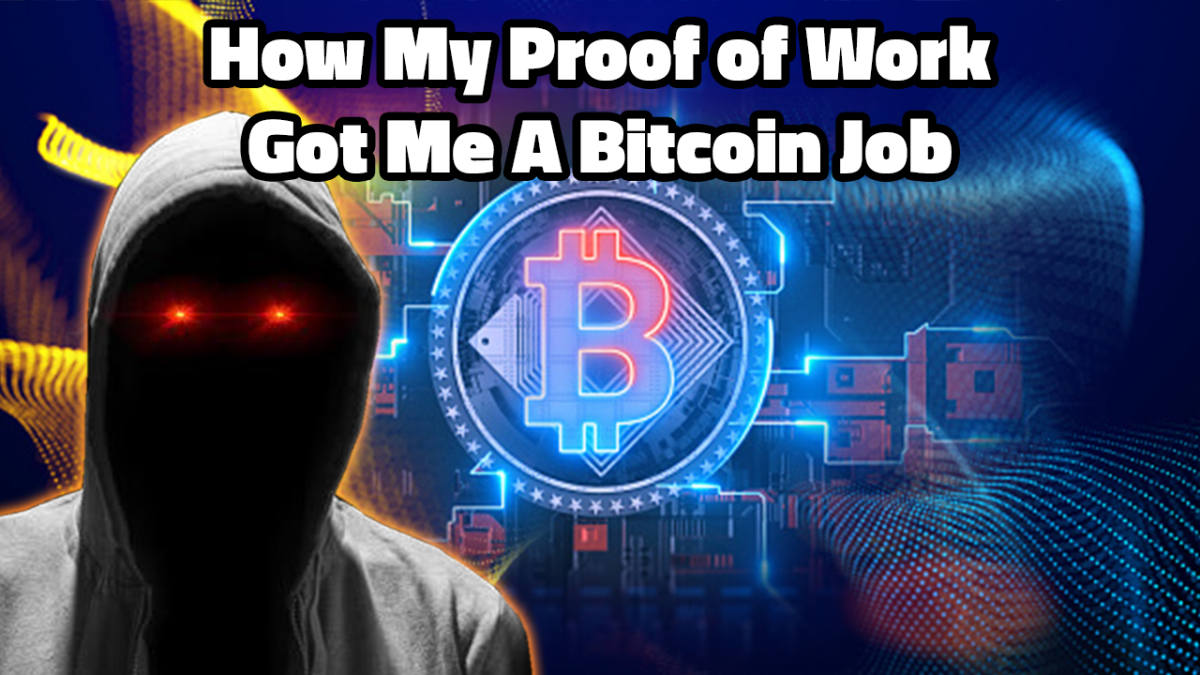 How My Proof Of Work Got Me A Bitcoin Job “Go to college. You won’t ever experience success if you don’t go to college.” I, as I’m sure many others have, heard this or variants of it hundreds of times. In a world where everyone is encouraged to attend secondary education, a large emphasis is placed on credentials and whether or not people have them. But the Bitcoin industry is different. The impact of one’s work in the space is entirely judged by the value you provide. If you can submit a body of work worthy of appreciation, then you will have a spot in this industry, regardless of prior credentials. I discussed this beautiful idea and more with our very own Namcios, so be sure to check out the podcast and the written interview below.

How were you first introduced to Bitcoin?

In 2014 my brother used to joke that bitcoin would become the world’s reserve currency. He had libertarian vibes then and learned about BTC in such groups but he didn’t quite study it. So even he didn’t take himself seriously –– and of course neither did I. Sometimes I stop and think how much I wish we had studied Bitcoin back then. I heard about Bitcoin a few times after that as well, but didn’t really get into the weeds of it until 2020.

Seeing all the money printing in the form of quantitative easing and low interest rates pushed me to seek education in economics to try to make sense of it all, and I naturally landed on Bitcoin. It was mind-blowing to realize what Bitcoin actually was, instead of what mainstream media portrayed it to be. After learning the economic aspects of Bitcoin, I just couldn’t get enough –– I wanted to learn about the technology and how all of its promises were possible. I downloaded stuff and coded things myself. As a result, I fell in love with Bitcoin.

What’s the primary “life lesson” that you have learned from your time in bitcoin?

Low-time preference, without a doubt. I had always been that guy that receives his paycheck and spends it all that month. I had never been capable of saving, subconsciously. But after understanding Bitcoin I realized how such a high-time preference mindset was being pushed culturally, both due to the inherent flaws of the debt-based fiat monetary system and the agenda of big brands and social media. It then clicked to me that even though I didn’t have the discipline to save, what lacked the most were the incentives to do so. Saving in fiat money is counterintuitive –– why would you save in a monetary good that devalues in time? So, all in all, it made sense to be that way, to spend it all as soon as that paycheck hit my checking account.

But after digging deep into Bitcoin, understanding about time preference and saving versus spending became a no-brainer. Why would I spend more than the truly necessary now if I can save and guarantee a better life for myself and my family in the future? This single realization shifted my life priorities completely, and today I have a much better understanding of what I need to do in order to ensure my future well-being. Moreover, this acknowledgement pushed me to realize the power of delayed gratification. In the end the question is, what can I do each day to set me up for a better future?

What’s your experience been leveraging the digital network of Bitcoin to acquire an international job in the industry?

This has been the most wild accomplishment of my life. Out of a simple Twitter DM (much love, CK), arose the opportunity to work with what I am most passionate about, Bitcoin. The Bitcoin Magazine team and BTC Inc. at large are incredible, and I’m honored to be among these hustlers working to drive high-quality Bitcoin information forward in the form of news coverage, education, and cultural articles. Our reach is growing by the day with all the new products and team members and I’m really glad to be a part of it.

What are you most looking forward to in the Bitcoin space?

Currently, Taproot/Schnorr. I really want to see how it gets deployed, what adoption will look like, and all the possibilities and use cases it may unlock. I am still studying it all and trying to get the full picture, but I feel like some things will only become evident after it gets deployed. The fact that Schnorr was patented until 2008, the year of the Bitcoin white paper, and we’re now adding it is comic and interesting to me. I’m hyped about the stronger assurances and the signature possibilities –– adaptive signatures, cross input signature aggregation, etc. I’m also hyped about the privacy improvements of not having to disclose all spending conditions of a script and making multiple and single signature spendings look similar on-chain. Lightning is also likely to see some improvements, and all this put together gets me very pumped. (And also shows me I have homework to do and plenty of things to study still.)

This one is hard, because I don’t believe the dollar has any value right now — so for me it’s already past dollar valuation. The world is just lagging behind in realizing it. But if I have to give it a dollar price, I’d say $300,000 by the end of year and $10 million by 2030. In truth, I think this decade is the last one in which people will care about the dollar price. By 2030, the dollar will have lost so much value that bitcoin will have no fair value anymore. Think high.

$2 million per BTC? Ok, could be, but still, what will those $2 million be worth in the first place? Nothing. So $5 million? Yeah, more like it. $10 million? Could be as well. It makes no difference. The denominator will be worth nearly zero, so BTC might as well go to infinity — and I honestly think that’s where it’s headed. This decade is the turning point, nobody will want dollars after their faces are melted by the bitcoin price appreciation. MicroStrategy will demonstrate how stupid every other company is being right now and the corporate FOMO will ensue. And the same will happen at the nation-state level with El Salvador’s pioneering move. We just have to keep working on the network’s resiliency and antifragility, and the rest will take care of itself.